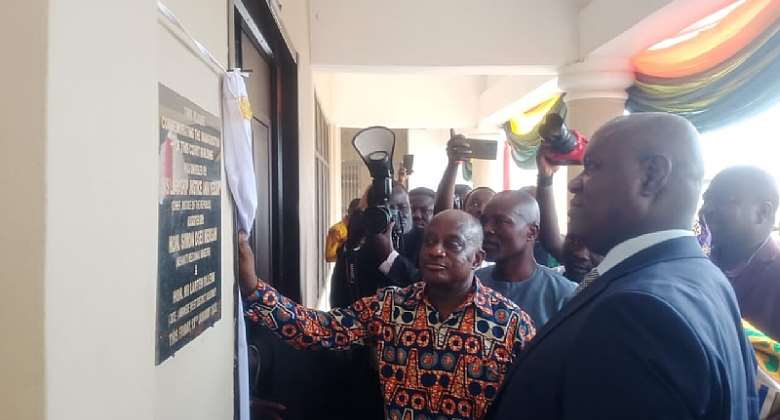 The Judicial Service of Ghana has commissioned the District Court complex for the Amansie West District to aid in bringing justice delivery to the doorstep of the assembly.

The facility, which comprises Boreholes, Solar Power, Generator Sets, and other facilities is funded from the District Assembly Common Fund, in collaboration with the Ministry of Local Government, Decentralisation, and Rural Development.

The Chief Justice of Ghana his Lordship, Justice Annin Yeboah stated that the state of court buildings in the country continue to adversely affect the effective and timely delivery of justice.

“Over the years, several factors have militated against the effective operation of the courts generally and rendered our services to the people of Ghana sometimes ineffective. Key amongst these is the deplorable state of our physical infrastructure from which the justice needs of the people of this country are served,” he stated.

According to him, a needs assessment conducted nationwide by the judiciary in 2018-2019 revealed that a significant number of court buildings are unfit for purpose, a situation the Chief Justice described as disconcerting.

Justice Anim Yeboah is however happy with the efforts and commitment of the government to address the challenge.

“Several meetings with the Ministry of Local Government, Decentralization and Rural Development culminated in a bold declaration by the President two years ago, that government will construct 100 courthouses with bungalows for judges and magistrates across the country. Even though this may have been deemed as over-ambitious, today we have gathered to inaugurate this courthouse.”

On behalf of the Judicial Service, the Chief Justice, His Lordship Kwasi Annin thanked the President and all stakeholders, including UNICEF for their contributions to addressing the challenges of the judicial system.

Speaking to the media during the commissioning ceremony, the District Chief Executive for the Amansie West, Hon. Nii Larteh Ollenu added that the distance and cost of traveling unnerve the residents to search for quality Justice.

He added that the availability of the court would alleviate the problems in the Pakyi community. "This would go a long way toward changing the public perception of the Justice delivery system in the country," he stated.

Hon Nii Larteh assured the Judicial Service that the District Security Committee (DISEC) would provide needed security for the staff.

The DCE thanked the Chief of Staff and further appealed for a District circuit court in the Amansie West District.

‘Sidelined’ GIJ threatens to withdraw from UniMAC merger
27 minutes ago