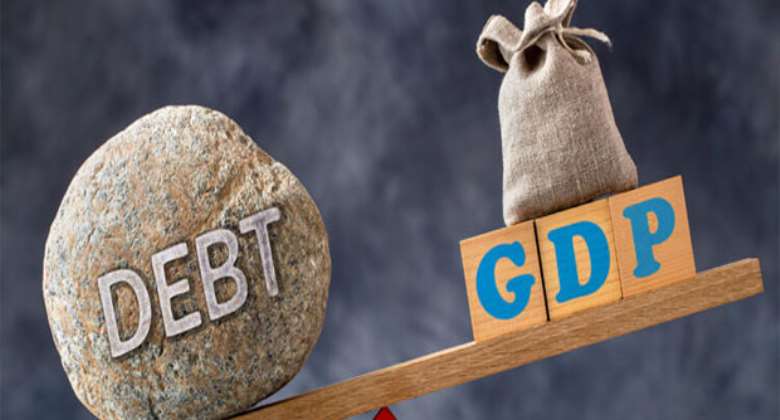 This article will lay the foundation for further analysis of Ghana’s Debt Exchange Programme (GDEP) which has been launched. The objective of this programme is to alleviate the debt burden in a most transparent, efficient, and expedited manner. On 5th December, 2022, the Ministry of Finance invited holders of domestic debt to voluntarily exchange approximately GH¢137 billion of the domestic notes and bonds of the Republic, including E.S.L.A. and Daakye bonds, for a package of New Bonds to be issued by the Republic. At present, debt servicing is now absorbing more than half of total government revenues and almost 70% of tax revenues, while total public debt stock, including that of State-Owned Enterprises and all, exceeds 100% of GDP. Hence, the announcement of debt restructuring programme.

According to the 2023 Budget, the total gross public debt amounted to GH¢467,371.32 million (US$48,871.34 million) at end-September 2022, equivalent to 75.9 percent of GDP. This compares to end-December 2021 total gross public debt of GH¢352,086.98 million (US$58,689.97 million), representing 76.7 percent of GDP. The elevated public debt burden largely reflects the impact of the currency depreciation. Ghana’s debt carrying capacity is rated “moderate” and the overall risk rating is characterized as “high risk of debt distress” and unsustainable due to the negative effects of exogenous shocks on the economy which worsened existing vulnerabilities. Table 1 shows Ghana’s public debt trajectory since 2018.

Source: Ministry of Finance
Table 2 below shows the interest payment burden from 2022-2026.

Source: IMANI Africa
As indicated in the 2023 budget, the proportion of domestic debt maturing in one (1) year increased from 30.5 percent to 45.8 percent mainly due to underperformance of Government revenue which resulted in Government resorting to tap-ins and reopenings. This resulted in higher domestic short-term financing and posed high refinancing risk. Consequently, the public debt redemption profile indicates that a large share of the domestic debt will be maturing in 2023, signaling the refinancing risks associated with this type of debt, with several treasury bills and bonds scheduled to mature.

Using Ecobank EDC as an Example in GDEP
It is clear that individuals will not be affected by the debt exchange programme but individuals have invested in fund management companies like the Ecobank EDC, Databank etc that have invested in government bonds. Using Ecobank EDC as an example, it has the largest fund size in Ghana. As at, 28th August, 2022, it had ¢ 2.663 billion under management. Already, fund managers are paying investors marked-to-market value instead of amortized value which is eroding interest and principal. In fact, individual and institutional investors will be affected by GDEP. Table 6 below is the asset allocation and performance for Ecobank EDC as at January, 2022.

Source- Ecobank EDC
Conclusion
The consequences of debt exchange programme will be dire for households and businesses in the short term but prudent management of the economy can resolve the current crisis. In an inflationary period (inflation rate is 40.4% as at September, 2022) and depreciating cedi, Purchasing Power Parity (PPP) has already declined and this will be worsened by the debt restructuring. The memories of the 2017/2018 financial sector clean-up are fresh on the minds of investors. This programme must be managed with utmost transparency. Timely communication about the GDEP will help to avert unintended outcomes. To bring back investor confidence, government must demonstrate commitment, especially on the fiscal management. I dare say, politicizing the debt exchange programme will worsen Ghana’s current economic crisis.