By Girmachew Adugna - The Conversation
Article 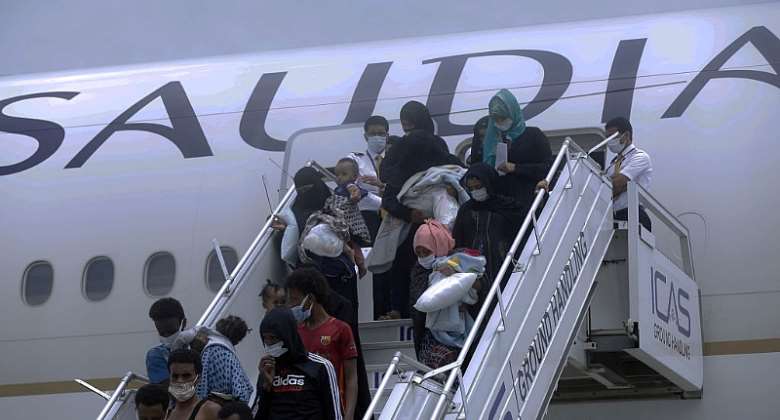 Tens of thousands of migrant Ethiopian workers have been forcibly repatriated from Saudi Arabia each year since the early 2010s. Although this is carried out as part of a crackdown on illegal migrant workers, legally documented workers have frequently been caught in the dragnet. Another 102,000 Ethiopian citizens will soon be repatriated in another round that began in April 2022. Girmachew Adugna, who has researched Ethiopian migration for years, explains the background to the deportations along with concerns about human rights violations and the challenges that returnees face.

What is the broad picture of Ethiopian labour migration to the Gulf?

There are over 30 million migrant workers in the more than half-a-dozen Gulf countries. As the third highest destination for international migrants in the world in 2019, Saudi Arabia is the main destination. Ethiopia makes a sizeable number of the kingdom's 13,122,300 migrant workers. It is estimated that about 750,000 Ethiopians currently reside and work in the kingdom.

However, the exact number is unknown due to routine deportation and irregular entry and overstaying visas. As many as 90% of the migrants entering Saudi Arabia illegally through Yemen are Ethiopian. Along with Ethiopians and Yemenis, the three largest immigrant groups in the kingdom are from India (2.4 million), Indonesia (1.7 million), and Pakistan (1.4 million).

There are a number of factors responsible for outward migration from Ethiopia. Although the economy is one of the fastest growing in the world , this growth has not been accompanied by considerable poverty reduction and job creation, particularly for young people. With migrant workers in Saudi Arabia earning five times what they could earn for similar work back home, the incentive to migrate is strong.

Ethiopians who migrate to the Gulf countries are mainly single, uneducated young people. Women account for about 95% of all documented migrants going to the Gulf.

Ethiopian workers in Saudi Arabia are mainly engaged in domestic work. Other popular jobs include cleaning, casual work and herding.

What is the backdrop to the intermittent deportations?

In recent years, the large number of undocumented workers has become a source of diplomatic friction between Saudi Arabia and Ethiopia. At the height of the Arab Spring which spread across North Africa and the Middle East in the early 2010s, Saudi Arabia began imposing strict immigration policies targeted at foreign workers. As a result, around 170,000 Ethiopians were deported in late 2013 and early 2014.

The latest round of repatriations involves 102,000 migrants. It began in April 2022 and is expected to be completed by the end of the year, according to the Ethiopian government. So far, 70% of the 102,000 citizens have been returned home on 198 flights.

While both governments haggle over the deportations in regular diplomatic exchanges , deportees suffer the direct consequences.

On many occasions, returnees end up as internally displaced. They do not realise their migration objectives and they return home in the context of poverty and conflict.

In Saudi Arabia, migrants repeatedly have their human rights violated . They are routinely placed in detention centres indefinitely.

Once back home, they are faced with a difficult reintegration into their communities. This happens if they are perceived as having “failed” to achieve the economic objectives of migration.

The Ethiopian government banned labour migration to the Gulf and Sudan after the first wave of deportations in the early 2010s. This was in order to come up with policy and legislation to improve the protection of its migrant workers.

The ban was lifted in February 2018. At the same time, Ethiopia proclaimed that workers could migrate to only those Gulf countries that had signed bilateral agreements : Jordan, Qatar, Saudi Arabia and the United Arab Emirates.

But these arrangements don't go far enough. Negotiations should also address the conditions of the detention camps and protection assistance for Ethiopian migrant workers. They should widen legal pathways for more Ethiopian migrants to work and live legally in Saudi Arabia.

Lastly, the Ethiopian side should press to regularise the status of irregular Ethiopian migrants. Saudi authorities are likely to resist this.

For its part, Ethiopia should do more for returning migrants. Lack of financial resources and skills makes it harder for returnees to re-enter the local labour market. This is partly because there are limited resources allocated for reintegration. Conflict in parts of Ethiopia makes the reintegration efforts difficult too.

Female returnees face stigma and discrimination from families and communities. This is partly because they are believed to be engaged in socially unacceptable practices such as commercial sex work.

Prioritising the reintegration of vulnerable migrants is key. This should seek to address individual needs as well as those of the family, community and structural problems. Community-based approaches to address stigma, prejudices and discrimination should be encouraged.

This task calls for a lot of resources. Ethiopia doesn't have what's needed and should look to the international community for help. But it will require hard work. The issue attracts little or no attention from international donors such as the European Union, which prioritises the return, readmission and reintegration of far fewer Ethiopian migrants working and living in Europe illegally.

Ethiopia has drafted the first ever national migration policy . This could possibly help improve the migration governance including return and reintegration efforts. It is key to strengthening the implementation capacity of government institutions at all levels and involving civil society, media, and the private sector in the reintegration process as they help facilitate labour market absorption, reduce stigma and discrimination.

Girmachew Adugna does not work for, consult, own shares in or receive funding from any company or organisation that would benefit from this article, and has disclosed no relevant affiliations beyond their academic appointment.