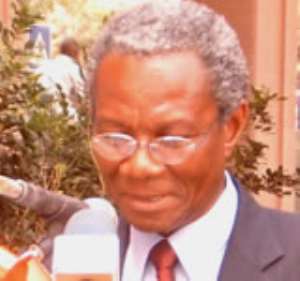 Water and electricity tariffs are to go up from Wednesday, November 1st, hours after the government announced reduction in prices of petroleum products.

The flat rate for commercial in industrial organisations and public and government departments is 8,150 cedis per 1,000 litres while the special commercial rate is 20,375 per litre.

A statement signed by Mr Kwame Pianim, Chairman of the PURC, said in line with the policy of discontinuation of the automatic adjustment, the utility companies were being invited henceforth to submit their request for tariff adjustment based on detailed cost buildup to enable the Commission to minimize inefficiencies and avoid transmitting such management inefficiencies to the consuming public.

The PURC said the utility companies should endeavour to cut cist and improve the delivery of utility services to consumers.

"The VRA (Volta River Authority) and ECG (Electricity Company of Ghana) are requested to adhere strictly to the load shedding programme in order to minimize inconveniences to the consuming public.

"Investors are being encouraged to explore opportunities to invest in the energy and water sectors to take advantage of the obvious shortages in the supply of these essential services."

The statement said it had become obvious that the country could no longer depend upon government resources and those of VRA to provide adequate and reliable energy supplies needed to fuel the nation's accelerated growth agenda.

"We need to make the environment attractive to independent power producers. For these investors, an economic tariff is of strategic and primary consideration."

The PURC said for the average consumer, it had become increasingly clear that conservation must not only be encouraged but be enjoined by a realistic tariff structure that reflected the scarcity value of the utility services.

"For the average worker, it is in the long term more desirable to pay a little bit more for dependable and realistic electricity rather than continue with current uneconomic tariff and its accompanying unreliable and disruptive supply that destroy people's appliances acquired after long years of savings."

The price adjustments were originally to come into effect on May 1, however the government decided to bear it.

Earlier in the day the National Petroleum Authority (NPA) announced new and reduced prices of petroleum products except LPG which was increased marginally.