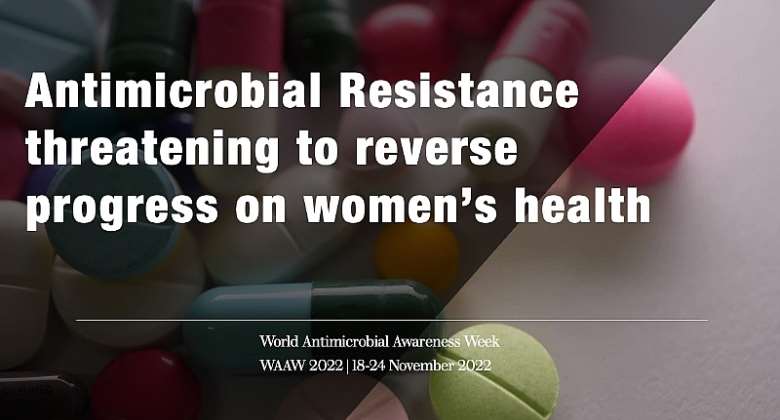 India is a leading consumer of antibiotics and hence also carries a huge burden of drug-resistant pathogens. Between 2000 and 2015, its antibiotic consumption increased by 103%, from 3.2 to 6.5 billion defined daily doses. Not just antibiotic use rose, but also resistance to antibiotics and other antimicrobials. A recent Government of India's Indian Council of Medical Research (ICMR)'s report points to a sustained rise in antimicrobial resistance in India, with an increase in the number of drug-resistant pathogens, making certain infections difficult to treat with available medicines or impossible to treat. This trend is a warning bell for all of us to take stringent measures against the irrational and irresponsible use of antimicrobials.

Women are at increased exposure-risk of antimicrobial resistance during pregnancy, abortion or childbirth

Increasing antibiotic resistance raises women’s risk of exposure to antimicrobial resistance during pregnancy, abortion and childbirth, especially when these events take place in healthcare settings without safe or hygienic conditions. A number of experts who were interviewed by CNS around 2022 International Conference of Family Planning (ICFP 2022) point towards this worrying trend.

"Women are exposed to drug resistant microbes when in the hospital for obstetric and gynaecological interventions or procedures, like DNC (dilation and curettage) or MTP (medical termination of pregnancy) or for a normal delivery or a caesarean section delivery," said Professor Amita Pandey, a leading gynaecologist working in one of the top government-run tertiary-care hospital of India, in an exclusive interview to CNS. Prof Amita Pandey is among the Academic Editors of Asian Research Journal of Gynaecology and Obstetrics, and Professor in Department of Gynaecology and Obstetrics, King George's Medical University (KGMU).

Based on her clinical experience, after analgesics, antibiotics are the second most abused group of drugs in India. “It is indeed a shame that antibiotics are prescribed 'right, left and centre', even when not needed, in many healthcare facilities.”

Failure to ensure absence of bacterial, fungal or viral contamination in healthcare settings cannot be compensated by irrational or irresponsible use of antimicrobials.

Failure to ensure absence of bacterial, fungal or viral contamination (asepsis) in most of the healthcare facilities seems to be the main culprit behind this. Patients are often prescribed unnecessary doses of high-end antibiotics to take care of any hospital acquired infection that they may contract during their stay in the hospital.

"If a woman goes for an abortion or to deliver a baby to a healthcare facility that does not have proper asepsis (absence of bacterial, fungal or viral contamination), then to cover up for that, she is usually administered broad spectrum antibiotics and that too for a variable period of time. Even though most of the obstetric interventions for delivery do not require antibiotics (the recommendation is just one shot of antibiotic), women usually end up consuming high-end antibiotics that are not required, thus fuelling antimicrobial resistance,” said Prof Amita Pandey.

Another example she cites is of pelvic inflammatory disease, that is very common in women, for which the first line of drug is doxycycline. “But if a higher end antibiotic is prescribed, then we are fuelling antimicrobial resistance,” she says.

The Indian Council of Medical Research (ICMR) has developed evidence based treatment guidelines for rational use of antimicrobials and categorically classified which antibiotics have to be used at which level of care. It also has also made a robust Antimicrobial Stewardship Programme which aims to prevent not only antibiotic resistance but also resistance to other antimicrobials, such as anti-virals, anti-fungals and anti-parasitics.

But unfortunately, these guidelines are rarely followed, except by some tertiary care hospitals. Moreover,"70% - 80% of the women reporting to the hospitals that have a very robust antimicrobial policy in place, including my hospital, are those referred from other health facilities where they have already received high-end antibiotics. So they have to be given even higher level of antibiotics in case sepsis sets in," rues Prof Pandey.

"It is very common to come across antibiotic resistance in most of the women who are referred to our tertiary-care hospital from various levels of healthcare facilities - tier 1 and tier 2 public hospitals and private hospitals. At the slightest doubt of infection in these patients, we have to start with very high-end antibiotics, as they have already been subjected to the low-rung antibiotics for a very long time and hence are resistant to most of them. But for women who are directly registered at our centre for an obstetric intervention, and not referred from elsewhere, we start with the bare minimum recommended single dose of antibiotics. Only when she does not respond to it and there are signs of sepsis do we go to the next higher level," said Prof Pandey.

She calls for a ban on over-the-counter sale of antibiotics and for strict guidelines about who can prescribe which antibiotics. “Anyone and everyone should neither be prescribing nor using antibiotics. Community and primary health centres should be allowed to dispense antibiotics like ampicillin, metronidazole and gentamicin. Only when the patient does not respond to them, other higher antibiotics should be made available to these centres on written request”.

Professor Aziz-un-Nissa Abbasi, National President of Society of Obstetricians and Gynaecologists of Pakistan, also agrees that “We should regulate over the counter sale of antimicrobials and stop their sale without a prescription from a qualified doctor to prevent their misuse. There needs to be more public awareness on antimicrobial resistance so that people do not unnecessarily take antimicrobials for simple ailments like flu or cold. If they are prescribed antimicrobials, they must always complete the treatment cycle and not stop taking the drug in between, as this also fuels antimicrobial resistance,” she says. Prof Abbasi is also the Dean, and Professor of Obstetrics and Gynaecology, Ayub Medical College, Abbottabad in Pakistan.

Uniform and universal implementation of guidelines is a must

Having robust and strict guidelines in place is a prerequisite for proper usage of antimicrobials and for avoiding irrational use of existing drugs. However, equally important is to have systems in place to ensure that these guidelines are implemented at all levels of healthcare facilities-public or private, tertiary care or tier-1 or tier-2 hospitals, says Pandey. “Just a few hospitals having these guidelines and enforcing them is not going to solve the problem. It has to be a uniform and universal implementation everywhere across the country. Only then will we be able to curb the rising menace of AMR”.

It is high time that organisations like Family Planning 2030 (FP2030), International Planned Parenthood Federation (IPPF) and others, as well as conference-platforms like International Conference on Family Planning (ICFP), that advocate for sexual and reproductive health and rights, put antimicrobial resistance (AMR) higher-up on their agenda. Every episode of pregnancy, abortion or child birth and other gynaecological interventions increases the risk of morbidity and mortality for women due to antimicrobial resistance (AMR). We cannot work in isolation to curb AMR. All sectors working for human health, animal health, food and agriculture, and the environment, will have to work in tandem under the umbrella of One Health, for a healthier tomorrow for all.

Antimicrobial resistance (AMR) occurs when bacteria, viruses, fungi and parasites change over time and no longer respond to medicines, making infections harder to treat and increasing the risk of disease spread, severe illness and death. As a result of drug resistance, antibiotics and other antimicrobial medicines become ineffective and infections become increasingly difficult or impossible to treat.