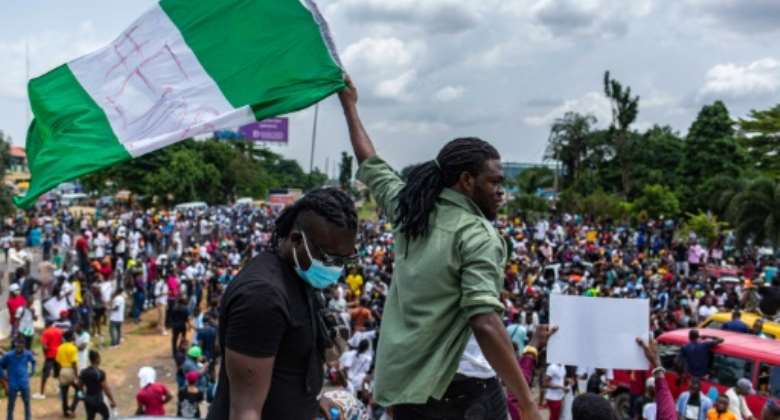 A Nigerian man waves a flag at a protest in Lagos against police brutality. By Benson Ibeabuchi (AFP)

Two years after Samuel Ashola was shot in the leg during a peaceful protest in Nigeria's economic capital Lagos, the unemployed artist boils with anger as he prepares to vote.

"My blood is hot," said the 30-year-old, before campaigning for the 2023 general elections starts later in September.

"I'm from the ghetto, the slum, the gutter... and I can tell you, Nigerians are really mad. The way our government is running things, with all that happened... I want to vent it out."

Many young Nigerians behind the largest protests in the country's modern history were traumatised by shootings in Lagos State on October 20, 2020, when security forces violently dispersed a crowd demanding better governance.

Mass protests, which rallied to the hashtag #EndSARS -- referring to the Special Anti-Robbery Squad (SARS) that was eventually disbanded over reports of extortion and brutality -- ground to a halt after that fateful night.

Amnesty International said at least 10 people were killed by the security forces, a claim the government has repeatedly denied. A Lagos investigative panel described the incident as a "massacre".

Since 2020, the economy has deteriorated, insecurity has spread and public universities have been shut for eight months due to strikes. By Benson Ibeabuchi (AFP)

For those who were there and many others watching online, it was a moment of political awakening that could impact the outcome of next year's vote.

"We stopped fighting because we knew we had a chance to change the people at the top in 2023," said 27-year-old Esther Jonathan. "We've been waiting for this."

Since 2020, the economy has deteriorated, insecurity has spread and public universities have been shut for eight months due to strikes, spurring on those who want change.

Vying to replace President Muhammadu Buhari, who is to step down after his two constitutional terms, are Atiku Abubakar of the People's Democratic Party (PDP) and Bola Ahmed Tinubu of the ruling All Progressives Congress (APC) party.

But outsiders Rabiu Kwankwaso of the New Nigeria People's Party and the popular Peter Obi of the Labour Party could benefit from an emerging protest vote.

Voter turnout is generally low in Nigeria — 33 percent in the last election — and young people are not known for being the most politically active.

But "there has been a positive progression from 2015 until now" in interest in politics, said Udo Jude Ilo, analyst and consultant with Thoughts and Mace Advisory.

Last month, the electoral commission said around 70 percent of newly registered voters were aged 18 to 34.

Last month, the electoral commission said that around 70 percent of newly registered voters were aged 18 to 34. By PIUS UTOMI EKPEI (AFP)

"(The) 2023 election is not going to be like every other election," said Akinwunmi Ibrahim Adebanjo, 26. "This time we will be coming outside... to get the country back from the hands of political thieves."

Odunayo Eweniyi, a 28-year-old founding member of the Feminist Coalition, a key group behind the movement, believes the 2020 protests inspired people who had not directly supported them.

"Whether you were pro or against, the truth is, a change was made, voices were heard," she said. "And now because we realise it is possible -- wherever you are in Nigeria -- to have your voice heard, people are building on that momentum."

The protests were also a turning point for the political elite, according to Hamzat Lawal, a 35-year-old activist who recently announced he intends to run for office.

The government "could have created an enabling environment for dialogue," he said, but instead resorted to force because "they were scared.

"They never saw young people this organised... mobilising resources, coordinating themselves, speaking in one voice."

Five out of seven protesters AFP interviewed in Lagos and the political capital Abuja said they would vote for Obi. At 61, his age is one of his attractions, since Abubakar and Ahmed are both over 70.

"Right from independence we've been ruled by one old person to another," said 27-year-old Anita Izato. "I think it's time to see if a younger person could do better."

Apathy and vote buying are hard to shake off in a country where 80 million people live below the poverty line. By Benson Ibeabuchi (AFP)

While Obi used to be a member of the PDP, he is now running with the much lesser known Labour Party and has managed to position himself as anti-establishment.

Many say his chances are limited, in part because his party does not control any of Nigeria's 36 states or governors' posts, perceived to be necessary to deliver votes.

Apathy and vote buying are hard to shake off in a country where 80 million people live below the poverty line and influence can be paid for.

If the APC or PDP candidate wins? "I will protest," said Jonathan, with a smile.

For others, like 30-year-old Leo Dasilva, such a result should serve "as a lesson", so that by the following election "we (the youth) will be a lot more prepared to take power".