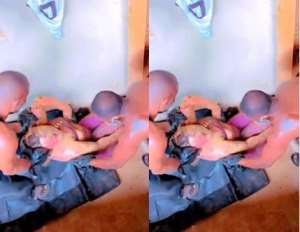 A pastor is set to face court after allegedly confessing to the police a heinous crime he has committed at Mankessim in the Central Region.

The pastor has been arrested in Cape Coast after he admitted to being part of the killing of a student nurse.

According to the information gathered from sources, the pastor subsequently led the Police to the house of a chief, Tufohen of Ekumfi Akwakrom, Nana Crack.

It is there that he showed the police a pit where the body of the student nurse was buried.

The police retrieved from the chief’s house the bag, shoes and other belongings of the deceased.

The chief who is also President of the Mankessim Traders Association has been fingered in the suspected murder and burial of the student nurse.

The police have officially opened an investigation into the matter to ascertain what really happened.

Checks have revealed that since the retrieval of the body, both the pastor and the chief have been kept in police custody.

News of the killing and burial of the student nurse has shocked residents of Mankessim with many calling for security reinforcement.

Meanwhile, the body of the 25-year-old student nurse has been deposited at the Cape Coast Teaching Hospital Mortuary for preservation and autopsy.