The Michelle Boit Mentorship Programme helps boys and girls to excel in STEM.

Michelle Boit was born in Tulwet, a small village in Uasin Gishu County in north-western Kenya in the 80s. Her parents encouraged her to excel in school and to be the best she can be in the society. 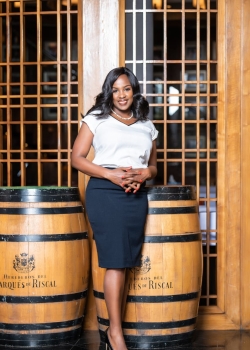 Her father was a professor of Biochemical Engineering at Moi University and her mother an administrator at the same university.

In school, mathematics and science subjects were like a walk in the park for Michelle. She was always at the top of her class, and, from the beginning, she knew she would pursue STEM (science, technology, engineering and mathematics).

It was in high school where her passion for the sciences blossomed, and she decided she wanted to be an engineer. However, when she sat for her O-level exams, she scored mostly ‘B’ grades in her science subjects. Engineering courses were the preserve of straight A students.

“However good I was in sciences, I got ‘B’ grades and did not make the cut-off points required to pursue chemical engineering studies in Kenya, so I took an accounting course. But deep down I was not passionate about accounting. My father noticed this and decided to take me to the US to pursue my dream,” says Michelle.

She then joined Texas Tech University to study chemical engineering where she graduated with a first-class degree.

It was during her time in Texas that the idea of mentorship began. She started by visiting schools in her neighbourhood like Roberts Elementary School, Overton Elementary School and Slaton Middle School in Lubbock in Texas and encouraging the students to work hard.

Later Michelle applied for an internship at the British Petroleum (BP) Oil and Gas company in Amarillo, Texas, in the US. She was assigned three mentors who took her through the petroleum engineering industry. Later they offered her a job and she worked there for seven years serving in various business units and different fields. She worked in Amarillo in Texas, Wamsutter in Wyoming and Farmington in New Mexico.

In 2012, Kenya struck oil in the northern part of the country, Turkana. Two years later, with solid experience in petroleum engineering, Michelle was offered a job as a petroleum engineer with exploration company Tullow Oil.

“I wanted to be a part of the pilot team involved in the discovery and exploration of oil there. Tullow was also looking for Kenyans with experience and skill in petroleum engineering. I decided to move back home and bring my rich experience in oil and gas to my home country,” Michelle told Africa Renewal.

“I started working as the East Africa Well Services Engineer, managing and maintaining all Tullow Oil Company wells in Uganda, Kenya, and Ethiopia. In 2017, we started the First Oil Production Project called EOPS (Early Oil Production Scheme) where I was the technical lead. I was able to lead the project from beginning to end with success. For me, that was the most challenging and probably the most rewarding project that I've done so far,” she says.

She worked for Tullow Oil until 2019 when she started her own consultancy firm and got her first contract with Glencore Oil Company in Chad.

Michelle, whose mantra is a biblical verse ‘As iron sharpens iron, so one man sharpens another’, realized that there was a mentorship gap and decided to fill it.

In 2014 she started the Michelle Boit Mentorship Program in Kenya. The programme aims to mentor and empower students, graduates, and young professionals in leadership. It also offers career development and peer-mentorship, as well as networking opportunities. The scholarship programme supports bright students who cannot afford their fees.

The engineer says she wanted to help bring out the talents and abilities in young people, just as she had been mentored.

“Mentorship was a passion I had all along. For me to be successful, I was mentored. I also wanted to give back to the community as I enjoy talking to the youth and encouraging them,” she says.

She has made it her mission to encourage girls to take up courses in STEM.

“We have very low numbers of girls taking up STEM courses. Initially, I started off encouraging girls who are good in science to join and pursue their careers in STEM. I began visiting high schools, starting with (my alma mater) Kapnyeberai High School. The parents there were happy with it, and they invited me to other high schools,” she said.

Michelle puts together various mentors - lawyers, doctors and other professions - allowing the mentees to choose to work with mentors in their career of interest.

She says: “We started with mentoring the girls, but we later opened up the programme to boys. So far, we have mentored more than 1,000 students. About 80 per cent of our mentees are from Kenya while the rest are from other countries in East Africa, Mozambique, the US and the United Kingdom. We have plans of using technology to reach out to other young people across the world.”

Ms. Fancy Kirui, a petroleum engineering student at Kenyatta University and a mentee, lauded the Michelle Boit Mentorship Program noting that it had helped her in her career choice.

“I had never networked before because I was very shy. Michelle was the first professional to network with and the first person I ever felt comfortable talking to. She taught me how to communicate professionally, helped me rework my CV when I was in my second year at the university. Since then, I have gained the courage to approach potential networks and to work hard to succeed in my career,” said Ms. Kirui.

Hayat Shariff a petroleum engineer graduate from Kenyatta University narrated how Michelle helped her get an internship opportunity with Tullow Oil.

“I learnt about Michelle in my third year at the university. She mentored me through university. When I graduated, she helped me write my CV and encouraged me to apply for job opportunities. When I was due for an interview, we did a mock interview and although I was underqualified for the job, I aced it and they offered me an internship opportunity at Tullow Oil. She has continued to support me in my career, and I appreciate it,” said Ms. Shariff.