The History of Ghana in world football 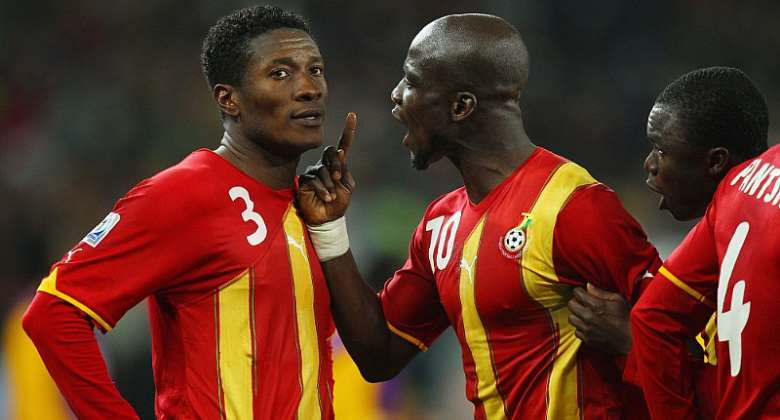 Football is one of the most beloved sports throughout the world. This game carries fans more than any other game worldwide. There are an estimated 3.5 billion soccer fans around the globe, making soccer the top sport globally. Cricket, hockey and Tennis stand second, third, and fourth respectively.

Let’s discuss different aspects of this game including its general history and from the perspective of Ghana.

History of football in the World

The history of football can be traced back to 2,000 years. Different countries in the world claim the origin of this game. These countries include Greece, China, Rome, Japan, and Great Britain.

Greece used to play the game called Episkyros. This game involved throwing a ball over the heads of team members. It also involved coordination among players using a ball. Hence, Greece claimed football originated in their country.

Likewise, the Military in Ancient China used to play Tsu Chu's sport. This game was designed to kick a leather ball in the net with feet. And players were not allowed to touch the ball with their hands. So, it was in some manner similar to modern-day football. That is why the Chinese claim football originates from their country.

In the Roman Empire, the game played was called harpastum. This game involved opposing an opponent and bringing the ball to one’s own side of the court. So, Romanians claim football was started in their country.

Similarly, the Japanese used to play a game called Kemari. In this sport, the players used to work as a team and keep the ball in the air. So, this game also involved team coordination with a single ball on the ground. Hence, the Japanese claim that football originates in Japan.

History suggests that Great Britain had originated the game's rules regarding touching the ball with hands, tripping opponents and uniforms in this sport. With time, more complexity was introduced into the game. For instance, a penalty kick was introduced to compensate the victim team. Similarly, the system of yellow and red cards was introduced. This led to more and more discipline on the ground and increasing interest of the people in this game. (stadium)

Fédération Internationale de Football Association (FIFA) is an international football association founded on May 21, 1904, in France. This association is designed with the responsibility to promote this sport globally. FIFA is also responsible for managing and maintaining tournaments throughout the world. Further, FIFA works to advocate sports integrity and fair play globally.

The members of this association include 211 national associations and six confederations. These members belong to different countries of the world. Federations operate throughout different continents. FIFA governs matters related to regulations of the games, organization of the international competitions and tournaments including the FIFA world cup, encouraging coaching methodologies, establishing enhanced standards for the game, working on sports medicine, and the overall development of football around the globe.

History of the World Cup tournament

The FIFA World Cup tournament is one of the most prestigious sports tournaments globally. The World Cup is conducted every four years and 32 teams take part in the world cup. Further, the host country for the World Cup is selected by FIFA.

The first official FIFA World Cup was conducted in 1930. This match was played between Argentina and Uruguay; Uruguay won the match. After that, the World Cup was conducted after every four years. The Second World War interrupted the consistency of the game. However, it was resumed in 1950 and played after every four years. The next FIFA World Cup is to be played from November 21, 2022, to December 18, 2022.

In FIFA World Cup history, 79 nations have competed in the tournament, and twenty-one final tournaments have been played. Only eight national teams have been champions that have won the Cup. Brazil stands first in the queue with five times wins. Other winning nations include Germany and Italy (each won four times). In addition to this, France, Argentina, and Uruguay have been a winner (each won two times). Similarly, Spain and England have won the title once. (wiki)

History of the World Cup in Ghana

Ghana's national team is called the Black Stars. The governing body of Team Ghana is the Ghana Football Association. The first time Ghana qualified for the World Cup in 2006, she had the youngest team in the tournament. (Wikipedia)

However, we lost our next match with Brazil by 0-3. Ghana was the only African country in that year to make it to the round of 16 and was eliminated after the match with Brazil (Wikipedia). In this World Cup, two matches were won and two lost. Ghana was ranked 13th out of 32 by FIFA in that tournament which was impressive for Ghana as debutants (Wikipedia).

Ghana beat the USA 2-1 in the round of 16 to make it to the quarter-finals. The year 2010 was the country’s best performance yet. Unfortunately, Ghana lost in a penalty shootout to Uruguay when Asamoah Gyan famously missed that crucial penalty shot. Had Ghana won that match, she would have been the first-ever African country to make it to the semi-finals stage of the FIFA World Cup competition (Wikipedia). Ghana was ranked 7th out of 32 teams that played the championship.

For the coming FIFA World Cup, 29 countries have been qualified so far to compete. The decision for the remaining three spots is to be taken in June. However, after the grouping of the teams, Brazil seems to be in a winning position considering their strengths and other dynamics of the games.

Still, some people suggest that France is a favourite and some suggest England should win this World Cup. We nonetheless hope for team Ghana to be Champions through strong team coordination, understanding of game dynamics, and applying appropriate tactics to win.

All teams for the world cup have been divided into eight groups. Each of the groups has four teams. Ghana is included in group H alongside Portugal, Uruguay, and South Korea. This Ghana National football team has real potential. (Indian Express)

In conclusion, the sport called football is one of the most loved sports throughout the world. The fans of football are estimated to be 3.5 billion around the globe. And the areas of regional popularity include Africa, Asia, America, and Europe. Cricket, field hockey and Tennis stand second, third, and fourth in terms of estimated fans.

The history of football is traced back 2,000 years ago. Greece, China, Rome, Japan, and Great Britain claim to have originated this game. Although, games similar to football have been played in these countries. However, the rules of the game like not to touch the ball with hands, and the card system was introduced in later years by Great Britain.

In today's world, FIFA manages, operates and works for soccer development. This association was founded back in 1904. FIFA has been conducting the world cup since 1930. In addition to the World Cup, the association has been involved in different tournaments and cups like the Women's and Under-17 World Cup etc.

FIFA conducts the Football World Cup every four years. Uruguay won the first world cup in 1930. Team Ghana qualified for the World Cup in the years 2006, 2010, 2014, and 2022. As of this writing, Ghana has not won a World Cup, yet. However, team spirit is higher, and team Ghana has increasing expectations to win the world cup 2022! (football history)

I hope you enjoyed the read. Hit me up and let’s keep the conversation going! I read all the feedback you send. Also, feel free to throw at me topics you’d like to read or hear my thoughts on. You can always head to my Calendly to schedule a quick chat by going to calendly.com/maxwellampong . Or connect with me your own way through my Linktree: https://linktr.ee/themax .

These are all facts. And this has been an opinion piece.

Dr. Maxwell Ampong designs Sustainability Development Models and is the CEO of Maxwell Investments Group . He is also the Co-Founder of The RIO Corporation , the connectors between impoverished communities and impact solutions worldwide. He writes about trending and relevant economic topics, and general perspective pieces.

Latest Photo Reports
Catch up with all the political quotes from our politicians.
Advertise here
More from Macroeconomic Bulletin
ModernGhana Links
Finance, Risk and Financial Risk Management: From a Business Manager’s Standpoint
Noise Pollution and why you need to listen to this!
The DAVOS Agenda - A possible platform for local agendas e.g. flooding?
TOP STORIES

Ghanaian media carbon copying the West; Russia is not to bla...
17 minutes ago