The Civilised World Of Justice Amua-Sekyi 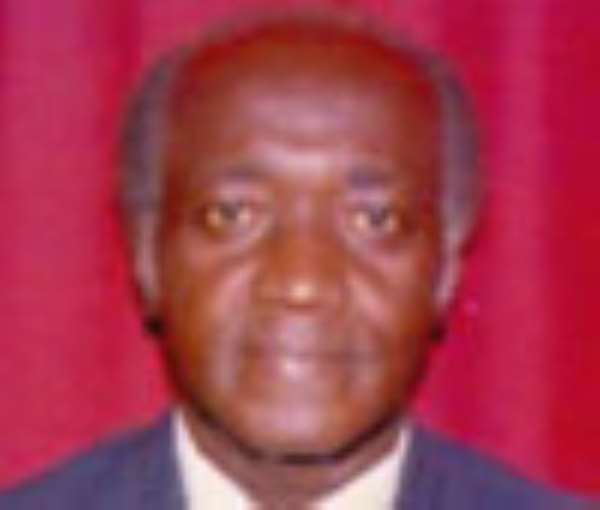 In a previous article that I wrote headed PUBLIC TRIBUNALS AND THE NRC, I pointed out the way the NRC was going on about its business and specifically how they had set out to malign the Public Tribunals, in a rejoinder to my article the NRC condemned my analysis and observations, but recent events and utterances by some members of the NRC and specifically their Chairman has proved that the hen is coming home to roost.

The tribunal bashing of Justice Amua- Sekyi and his NRC reached the highest point on Friday the 9th July 2004 when 13 armed robbers and some convicted murderers appeared before the NRC. A day or two before then, he had described the tribunals as a bunch who did not know what they were about.

It is not clear whether the NRC had become the Court of Appeal for armed robbers and murderers convicted and sentenced by the tribunals, but what was clear was Justice Amua - Sekyi using this appearance as an opportunity for tribunal convicts to condemn the tribunals and its operatives to his glee.

It did not end there; he climaxed his persistent subtle and sometimes direct attacks against the tribunal system, by siding with the robbers as their human rights having been abused by the tribunals and proceeded to call members of the tribunals as uncivilised.

Reacting to a statement by one George Acheampong convicted for robbery, resisting a lawful arrest, causing harm to a policeman and unlawful possession of firearms and said to have been sentenced to 53 years imprisonment due to a consecutive tribunal order, this is what Justice Amua Sekyi said. “His sentence should have run concurrently and not consecutively. It was the tribunals that started this kind of trial, which was not done in any civilised world.” WHAT IS THE ISSUE? The question whether sentences of imprisonment should be ordered to run concurrently or consecutively is a matter of law and it arises in a variety of different ways.

In any case the sentencer has power by law to order any sentence of imprisonment which he may impose to run consecutively or concurrently with each other, although he may not antedate the commencement of a sentence. It is only subject to two major limiting principles in law i.e. “the one transaction rule” and “the totality principle”.

Sometimes however Judges have a difficulty at where to draw the line and there are conflicting legal authorities on this. This power is in our Criminal Procedure Code Sec 301 of Act 29/60, which says sentences should be consecutive unless the court otherwise directs, if the criteria so exist.

Of course a rule of law could be misapplied or wrongly interpreted by a Judge or Tribunal Chairman, but that error by a judge does not make him a barbarian far from civilisation as propounded Justice Amua -Sekyi School of Law.

The NRC Chairman not having seen the tribunal judgement and/or proceedings, to have enabled him evaluate whether the tribunal erred in law by going consecutive instead of concurrent, proceeded to call the tribunals and its members uncivilised.

Has he Amua- Sekyi as a Judge ever committed an error of law by interpretation or has his judgment in a case ever been overruled or reversed by his peers on appeal? And has any such reversal (if any) made him less civilised?

Even listening to the convicts own account, the offences were committed separately and not in a one act, if this is the case then the Tribunal could have been right by going consecutive and therefore right in law.

Justice Amua- Sekyi's hatred for the tribunals is legendary. He came with a preconceived tendency that everything associated with tribunals was bad and conducted the proceedings of the NRC accepting and encouraging evidence that will prove this assertion and rejecting any evidence which will disprove his preconception.

And so he set out to readily admit Kwaku Ananse and Jack tale stories made under oath about the tribunals and its officials without cross checking or verifying, in pursuance of his grand agenda.

It is only in the civilised world of Justice Amua- Sekyi:-

v That when a serious allegation has been made against someone in a written statement of say 10-15 pages an expects the person to respond to the allegation, he will only provide a page of that statement and refuse the rest to the person in the name of rule of law and civilisation.

v That when someone has appeared before the NRC and chanted for over five hours and levelled all kinds of allegations against someone, he gives the respondent 15 minutes to cross examine after which time is over, if you are lucky you get 20 minutes.

v That armed robbers (some admitting to two or three robberies) and persons convicted of deceit and dishonesty related offences, could go and narrate their stories and so called ordeals to him and without any verification and without the record of proceedings proceed to pronounce a verdict of 'Uncivilised barbarism' on the trial tribunal in abstentia and sentence them by confiscating their integrity and professional competence.

v That he has allowed in 3rd and 4th hand hearsay, some very serious allegations to be made against innocent people including tribunal judges, saying the NRC was not bound by technical rules, but when a judgment was being tendered to be used in cross examination to disprove the lies he disallows it on technical grounds that it was not certified. Thus allowing the fabricated evidence to stand uncontradicted.

v That when it suited his purpose at where he wanted to turn the pendulum, the NRC was bound or not bound by technical rules and regulated its own procedure.

v That even though the NRC is a Commission of which he only chairs he gives decisions and rulings in the full glare of the public without recourse to consulting the other members of the Commission, as if he was a Judge and the rest were Jurors.

v that Chris Asher Jnr. at the time of his first appearance before the NRC was spotted at the residence of the Executive Secretary of the NRC after 9 p.m. and we are yet to be told what such a controversial witness was doing in that house at such a time and whether the business of the NRC was conducted in the house of its members and officials. (This matter will be seriously revisited soon unless there is a valid and credible explanation)

Because his father was tried and convicted by a tribunal for forgery and deceit related offences, Amua -Sekyi bears serious prejudice against the tribunals. Even before his appointment his condemnation of the Tribunals system at the 15th Speakers Breakfast forum in 2001 was phenomenal, see Tuesday, 12 June 2001, Daily Graphic.

But on his appointment he has used this whole period of the NRC to seek revenge on the tribunals and from day to day his appetite for hatred and prejudice against the tribunals has grown, making him lose his judicial temperament and composure and has rather become abrupt, abrasive, self-conceited. His sense of justice and fairness is now firmly rooted in arbitrariness.

The British Judge, Justice Geoffrey Robertson president of the United Nations Special Court of Sierra Leone was challenged on his impartiality because before his appointment he had written a book condemning the Revolutionary United Front (RUF) accusing them of committing several atrocities during the civil war. Even though the action to remove him as a Judge of the Special Court for Sierra Leone failed, he was made to step down from all cases involving the RUF. But in our case the Judge of civilisation Amua- Sekyi, is a judge in his own cause.

As the NRC comes to a close there is no doubt that reconciliation process has failed, there are more problems to resolve now than before they started, and one of the reasons for this situation is due to the attitude of Justice Amua-Sekyi and in the not too distant future, those who have been wrongfully accused by orchestration in this very high profile, fully multi media glare NRC, will need another appointed body to heal the wounds inflicted by Justice Amua- Sekyi and his NRC. Views expressed by the author(s) do not necessarily reflect those of GhanaHomePage.