Letter From The President: No Tears for Kiki 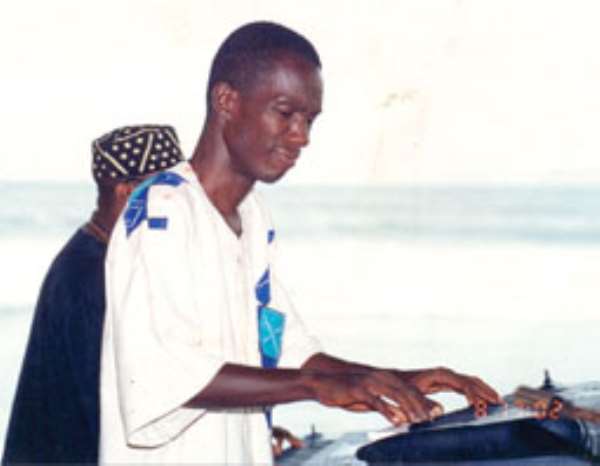 Countrymen and women, loyalists and opponents, I was in the US when I heard about the demise of Kiki Gyan – the former keyboard player for the renowned Osibisa Band. I was shocked and, for a while, sad. I wasn't sad for long because I don't think the late Mr. Gyan deserves to stay in my memory for long. He died a stupid 'owu' – that's the cold truth. Many Ghanaians are refusing to acknowledge the fact that Kiki Gyan is not a hero. He's not my hero. So I am surprised and angry at the amount of newspaper columns and broadcast airtime which has been used to eulogise him since he kicked the bucket, in a toilet.

You can't say that I have no respect for the dead, because just a few days ago I wrote about Ray Charles – a great musician who died in dignity. I respect those who leave the earth with a legacy, however small it might be. I don't have much respect for the dead Mr. Gyan. I believe that by eulogizing Kiki Gyan and opening up the radio phone lines for the public to be paying tributes to him, we are making a hero out of a man who wasted much of his life. Since I wouldn't like any child to emulate his example, I insist that he is not a hero and the eulogies should stop.

Kiki had a problem. Drug addiction is one of the major social ills of our generation. Anyone can fall victim to it. The strength of a man lies in his ability to rise up again after he had taken a mighty fall. When Kiki fell victim to drug abuse, he told the whole nation about his problem. He won such public sympathy that if he had really been serious about rising up from the ashes, he might not have died such a stupid 'owu'. But he conned us all. He conned all those who contributed cash and other resources towards his rehabilitation. The more money he was given, the more he immersed himself in the shameful habit which killed him.

My condolence goes out to the family and friends of Kiki. I pray that God gives them the strength to mourn him. It is their right to mourn him. But I want to warn all those radio presenters and newspaper reporters who are unwittingly making a hero out of Kiki to search their hearts and convince themselves that Kiki deserves the nice words they are showering on him. As for me, I am already convinced that Kiki does not deserve my adulation or tears. He doesn't deserve yours either. But please, don't be in a hurry to get Kiki out of your mind. We should remember him for the lessons his miserable life and shameful death thought us. These are lessons we can teach our children.

Kiki's demise teaches us that in the absence of discipline, talent is rendered useless. He was like a god behind the keyboard. He had absolute control over the keys and his fingers performed magic whenever he struck a chord. This was his talent. He helped to make Osibisa an international band. Kiki could have helped to make an international success of any band in any part of the world. But he had no discipline. He just couldn't stay away from the habits he knew could take him away from his beloved instrument – sex, alcohol and drugs. Thus, Kiki rendered his talents useless. No band will employ the services of an indisciplined keyboardist who happens to be seriously addicted to drugs – it doesn't matter how talented he might be. He could have been great. But in his twenties, Kiki decided to turn his back on what could have been a bright future. The same applies to all of us. You can only be the best in your field of endeavour only if you are disciplined and maintain a good character.

At one point in his life Kiki was supposed to be one of the richest young musicians in the world. He got all that money whiles playing with Osibisa. But he lost it all within the twinkle of an eye. He used it all to feed his dangerous habit. When he died he had absolutely nothing – except for the seven thousand cedis on him when his dead body was found in a toilet. Herein lies our second lesson from Kiki's death. Wealth is fleeting. Money comes and goes. When you get money, you need to screw your head on properly and get it to work for you. Don't allow anyone or any habit to treat you like an ATM. Otherwise, money will pass through your hand like water in a leaky bucket. I don't think there is anything as sad as a grace-to-grass story.

Finally, it is worthy of note that life always offers a second chance. No matter how hard you fall, there will be an opportunity for you to rise again. Yours will be to find that opportunity and use it wisely. When Kiki fell, he didn't hide his secret. It was a brave thing he did, going to the radio stations to tell his story. His bravery paid off. He won public sympathy. Everyone wanted to help him out. Millions were donated towards his rehabilitation. But Kiki failed to use this opportunity. In one minute Kiki told us that he was ready to be rehabilitated. In the next minute, he was in a drug den sniffing as much heroine and cocaine as he could. He gave his doctors a headache. He never stayed in the rehabilitation centre and in the end, everyone gave up on him. He even gave up on himself.

So that's it. I am not shedding tears for Kiki. In fact, I think that death has done him some good. He brought so much misery upon himself that living was not a worthwhile venture for him. May he rest in peace. And may the living learn lessons from the tragedy of Kiki's life.