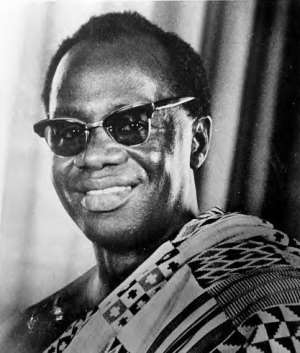 On the 6th of March 1957, Dr. K.A. Busia as leader of the Parliamentary Opposition, seconded the Independence Motion and made some poignant observations on racism, colonialism, developmental expectations, anticipated contribution to the heritage of humankind as well as his aspirations for Ghana. How has Ghana met deﬁned hopes and expectations 65 years on?

Excerpts of Dr. K.A Busia's Independence speech : " Mr. Speaker, I am happy to be able to second the motion for an address in Reply to be presented to her Majesty on behalf of this National Assembly. The august and colorful assembly we hold here today marks the end of one kind of association between our country and Britain, and the beginning of another. It marks the end of our colonial status.

Colonialism has fallen into disrepute and is now almost a term of accusation and reproach. Yet as recently as the last century, acquisition of colonies did not only feature prominently in the foreign policies of the major European powers but was also stoutly defended on various grounds: the right of the ﬁtter races to survive, the need for economic expansion or the mission to carry the light of civilisation into the dark and backward areas of the world!

***No one today would seek to justify the slavery, exploitation, inhumanity and injustice that accompanied colonialism .On this occasion however... We can without shame or bitterness and in fact with sincere gratitude acknowledge the beneﬁts which our connection with Britain as an imperial power has brought us ( Hear Hear)....... (enumerates)

Nevertheless these beneﬁts came to us on the basis of a relationship which could not, but be an affront to us, resting as it did on assumptions we were bound to question and on Injustices we were bound sooner or later to seek to Rectify. It happily accords with contemporary thoughts and feelings that such a relationship should END....

Our independence gives new dimensions to the British Commonwealth of nations and points to new possibilities of international relations for world peace and coexistence . The evolution of subordinate colonial territories to independent nations, in partnership, on the basis of Equality with the former imperial power is a noteworthy political phenomenon......

***We may be permitted to observe that our admission to membership within the Commonwealth drives another nail into the coﬃn of the crude biological theories of racial superiority by which many have striven to justify the domination of one race by another. We become members of the international fraternity of the British Commonwealth on the basis of our Common Humanity.

.....We owe this achievement as well to many of our own countrymen, political leaders, chiefs, farmers, workers and citizens in all walks of life who by what they learnt and what they did, helped to lay the foundations and gave evidence of our ﬁtness to govern ourselves.

***It is by the devoted day to day service of many ordinary and unnoticed citizens that a nation achieves greatness; and while today we pay tribute to those living and dead, who were privileged to serve in the limelight of publicity, we would remember with special gratitude the

many ordinary men and women, whose lot was cast in less conspicuous places, but to whom we owe much that is solid and of enduring value ( Hear Hear)

***We would not be realistic if we were not on this occasion deeply and humbly conscious of the heavier responsibilities that must now devolve on us.

*** Our own countrymen will expect better and higher standards of living; On us will be focused the hopes of many well wishes throughout the world for some notable contribution from us to mankind's common and ever- increasing heritage built up in the effort to improve and enrich our human life or to gain wisdom and understanding for peaceful co-existence in an international community. These are high expectations, BUT WE CANNOT ESCAPE THEM.

***It is our Prayer that All of us in this country, whatever our work or station in life, may Rise to the requisite Discipline, Integrity and Service without which these expectations will NEVER be fulﬁlled.

***It is our hope that we may make some contribution by cherishing and fostering the best in our tradition and past experience, and by honouring our Constitution and endeavouring to

build here a Democracy in which All will be truly free, and in which the Resources of the nation will be harnessed in the Wisest and most Economical ways we know, with the aid of the latest inventions of science and technology we can procure, and directed towards enabling Every Citizen to be and to give the best of which he or she is capable......

....Finally we pray that the birth of our country as an Independent nation within the British Commonwealth may mean for us also a Mental and Spiritual Rebirth and a fresh dedication of our talents to the Honest and Devoted Service of our country and generation. Mr .Speaker, I beg to second the Motion."( Hear , Hear.) End quote.

K. A. Busia 6th March 1957 in response to motion moved by Dr. Nkrumah at ceremony to open the new Parliament.

Above food for thought leads to some queries worth pondering : How has Ghana prudently met its so eloquently articulated freedom challenge and developmental expectation 65 yrs on? How do we leverage the current economic malaise to achieve socio-economic and political justice and global impact? What is the quality of service, and character of the average Ghanaian today? What do we currently bring to the international legacy table that digniﬁes black peoples the world over and helps disable theories of inferiority that feed racism and dents the African image in a global arena where peoples of African and black descent continue to suffer dehumanising racism even in the current Ukranian siege?

Is righteous outrage enough? How does a "black" star shine bright in a world where racism and collusive neo-colonialism still rage? How do we ﬁnd our way back to actualization of existential and fundamental ideals that led our collective independence quest now sadly sidelined to corrupt and parochial leadership interests?

Where indeed is that proverbial devoted, disciplined Ghanaian citizen with integrity and the spirit of mutual achievement of greatness? A nostalgic Ghana in dire need NEEDS YOU!