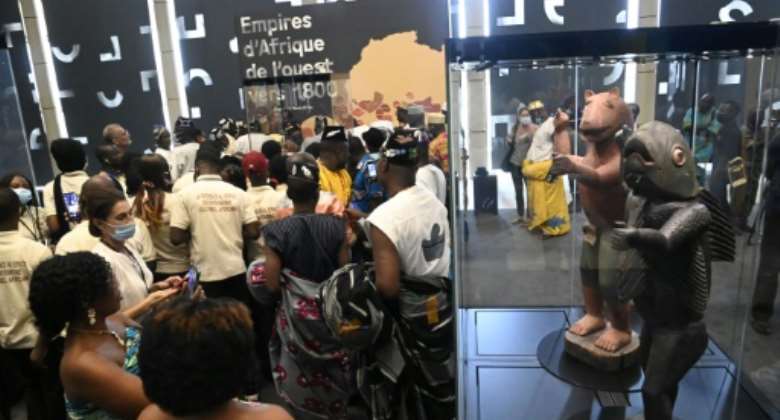 Visitors were allowed to view artefacts returned from France nearly 130 years after they were looted by colonial forces. By PIUS UTOMI EKPEI (AFP)

Like other visitors to Benin's display of looted royal treasures returned by France, Abou Malehoussou was immensely proud on what he called an "historic day" for his country.

The 32-year-old brought along his two-year-old daughter to see the 26 artefacts on display from Sunday in a space inside the presidential palace in Cotonou.

For Malehoussou, it was important to "learn with the family this story that we do not know, which has not been taught to us".

The 26 treasures, which were returned in November after two years of negotiation, were pillaged in 1892 by French troops in the then kingdom of Dahomey, in the south of present-day Benin.

Benin President Patrice Talon on Saturday officially opened the more than 2,000-square-metre space to host the exhibition, entitled "Art of Benin yesterday and today" until May 22.

The ceremonial throne of King Ghezo, one of the artefacts looted by French colonial soldiers, was among the items returned and displayed. By PIUS UTOMI EKPEI (AFP)

Three rooms with huge walls painted black, like a jewel case, give the exhibition a solemn character, fitting for royal treasures.

As soon as they enter, visitors face the ceremonial throne of King Ghezo (1797-1818), a majestic wooden sculpture almost two metres high, surmounted by a curved tablet.

Dozens of students and couples who came with their children respectfully stand in an arc facing the throne, before one of the exhibition guides urges them to approach.

"Don't be afraid, it's your heritage," he said.

Some peer into the glass case to admire the incredible motifs carved into the wood, others take pictures or beckon friends to see the throne from another angle.

Soon, the guides are fielding questions.

"What does this symbol represent", "Were the French already there?", everyone wants to know more about these works that are part of their history.

Benin and France negotiated for two years over the returned treasures, some of which are considered sacred. By PIUS UTOMI EKPEI (AFP)

"We didn't have books, but we had these objects, these are the objects that told our story before they were taken from us," Cosme Houegbe Lo Behanzin, great grandson of King Behazin, told AFP.

"It's the first time I've seen it, and I can't believe it," said the member of the royal court, who has tied a traditional yellow Kanvo fabric around his waist, embroidered in blue with the representation of his ancestor's motif, the shark.

Beninese are also invited to discover the second part of the exhibition, where 34 contemporary Beninese artists present around a hundred works.

From the monumental tapestries by Yves Appollinaire Pede honouring voodoo, to an installation made from hair by Dimitri Fagbohoun and the Afro-futuristic robots of Emo de Medeiros, this second part shows the artistic vitality of the Beninese contemporary scene.

For five minutes, Tireria Kalilou, a 32-year-old medical student, has not taken his eyes off a photograph of the Beninese Laeila Adjovi.

A woman looks up at the sky. The multicoloured wings of a messenger bird, which is flying with its head turned backwards, unfold behind her.

"It may seem simple, but to better understand the future, you have to know your past," said Kalilou, a Malian who arrived with his family at the age of five in Cotonou, and who feels Beninese.

At the exit, visitors stop for a long time, thoughtful, in front of a quote inscribed on a wall.

"Returning to the country that produced a work of art... is to allow a people to recover part of their memory and their identity."

The return of Benin's artefacts comes as Britain, Germany and other European former colonial powers are also under pressure to hand back some of their treasures looted from Africa.

Nigeria's government on Saturday also handed over two bronze treasures to a traditional royal palace in Benin City after they were returned from Britain as part of a series of restorations of artefacts there.