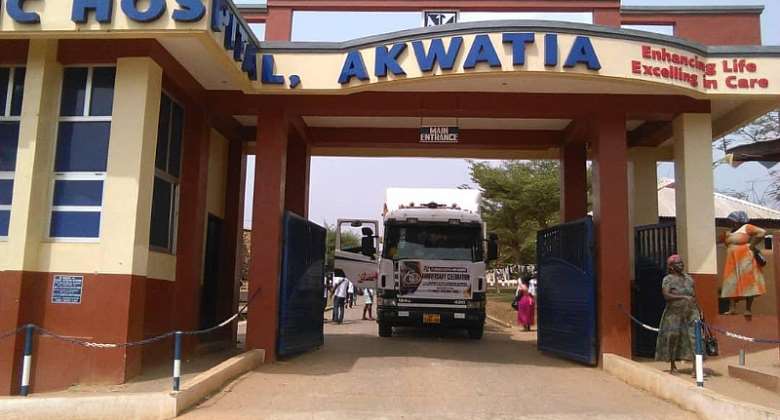 The St. Dominic Hospital has issued a press release to clarify allegations levelled against the hospital by Madam Lydia Dagadu in the media related to her baby.

Contrary to claims, the management of the hospital has denied neglecting the baby but insists that the mother refused to listen to medical advise when it was recommended to treat her baby of an illness.

The hospital explains that the baby (second twin), together with his brother, a set of twins delivered pre-term at the hospital in August 2020 was admitted to the Neo Natal Intensive-Care Unit (NICU) for medical reasons.

Upon recovery from the NICU, the baby was sent to Kangaroo Mother Care (KMC) to gain weight and was fully discharged after about two months.

After about 5 months later when the father and grandmother sent the twins to the hospital for assessment, no marked improvement was detected in the condition of both babies; and the said persons who brought them to the hospital this time attributed their conditions to causes that cannot be related in this release for good reasons.

The hospital notes that while performing routine protocol in the administration of medical care to the baby in December 2021, it became necessary to undertake an ultrasound scan on his hand which resulted in the detection of another medical condition for which the hospital prescribed a treatment.

However, the mother, Madam Lydia Dagadu once again rejected the advice.

The hospital nonetheless continued to manage the baby’s condition and upon his discharge, the mother was to bring the baby for weekly review until she together with a number of family members and a journalist stormed the hospital and demanded a meeting.

While the hospital expected the subject for the meeting to be that of the best medical care for the baby which had been paramount to the hospital, the family rather sought and demanded compensation for what reasons the hospital says it still do not understand.

The hospital as expected declined to accede to this demand for compensation.

The hospital notes that it has finally succeeded in securing the consent of the baby’s parents to undertake the recommended medical procedure on him and cannot but deploy its best efforts for the purpose for the baby to enjoy his normal health by the grace of God.

Amid the controversy that matter has caused, the hospital through its press release has assured all stakeholders that it shall not deviate from its core mandate as a not-for-profit Catholic medical facility established to provide the best medical care for all its patients within its capacity and ability with exceptional compassion within the best professional standards as it has been doing since 1960.