Professor Kwesi Andam: A Gem of a Leader 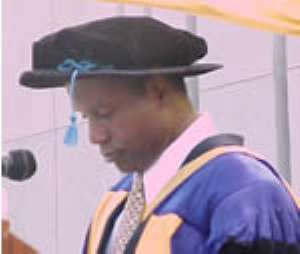 A great number of Ghanaians have a fixation with politicians and politics. We consider politics as a sport. When Ghanaians gather anywhere there is a likelihood that they will be talking about NPP this or NDC that. Even in our sleep we think and dream about politics.

There is a joke making the rounds in Africa, which mocks our excessive preoccupation with politics. It goes like this: “Ghanaians think they invented politics in Africa”! But alas, there is life beyond politics. There are leaders in our communities, corporate world and other institutions who do not necessarily carry the tag politician but whose leadership is helping to transform the institutions they lead and are touching so many lives in a positive way.

One of such leaders is Professor Kwesi Andam, the Vice Chancellor of the Kwame Nkrumah University of Science and Technology in Kumasi (KNUST).

Professor Andam has been making waves since he was appointed almost a year ago to head one of the most strategic tertiary institutions in our country.

KNUST is well positioned to make an immense contribution to Ghana’s quest to develop through human resource development and effective application of science and technology to solve her numerous development challenges. Today, graduates of the university are found in most sectors of the economy, contributing their quota to improve human conditions.

Since being appointed, Professor Andam and his team have developed a strategic plan to make the university a real centre of excellence for research, training and innovation.

Professor Andam is determined to expand the university and not to shrink it.

With most publicly funded tertiary institutions facing tremendous financial crisis, one would have thought that expansion would be the last thing the university administration will consider. Indeed a couple of months ago, the Vice Chancellor of Legon, Professor Assenso Okyere, had warned that his institution was contemplating reducing student intake by about 40 per cent.

Professor Andam wants to increase the population at KNUST by 50,000 in the near future.

This is significant considering that in this academic year the university received 13,617 applicants. Of this total, 11,836 qualified to be admitted.

Unfortunately, the university was able to offer places to a paltry 4,861 students, which represents only 36 per cent of those who qualified.

More remarkably, the administration has introduced an affirmative action programme to facilitate the admission of students from senior secondary schools with poor academic record due to their being located in very remote areas of the country. In this academic year, 59 of such students from all the ten regions of the country were admitted to start various degree programmes.

In his matriculation address recently, Professor Adam promised to increase the number of students from less endowed senior secondary schools to several hundreds in the coming years.

Professor Andam is committed to deepening the university’s relationship with the various communities surrounding it as well as improving its links to industry.

Among innovations being contemplated under the administration of Prof. Andam is the proposed introduction of an Aerospace Engineering programme in collaboration with Washington State University, which would be supported by Boeing, the world’s largest aircraft manufacturer.

Also, the university proposes to set up a centre to research into cures for HIV/AIDS. This should add to the frantic search for answers to a virus that threatens to wipe out the most productive segment of the African population.

We hope that Professor Andam would study the parallel degree programme at the University of Nairobi, Kenya in order to introduce it to KNUST. It could help provide space for working people who desire to improve themselves as well as to raise additional financial resources for the university.

It is indeed gratifying to note that there are Ghanaians out there, like Professor Andam, who are willing and ready to roll up their sleeves to do their best for their country. We say bravo! Views expressed by the author(s) do not necessarily reflect those of GhanaHomePage.