A Boy on Ice School or Sales? 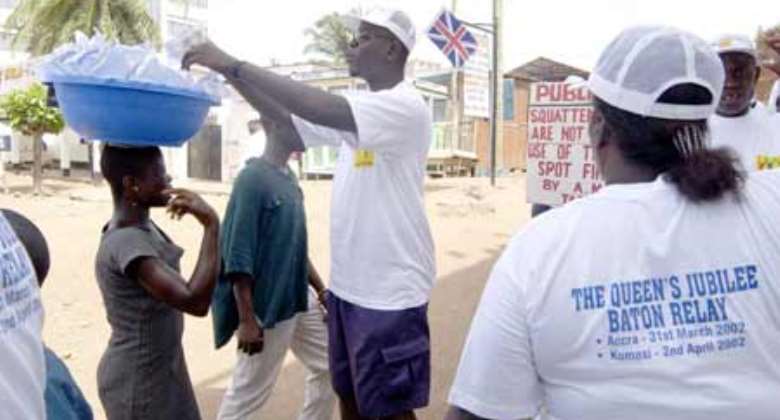 George Kyei Frimpong for Chronicle Many children who attend school sell iced water in plastic bags on the streets of Accra, working before and after their classes.

Courage Agbeve, a 12 year-old boy, is one of these children. He attends Saviour Primary School in New Town, one of Accra's most densely populated neighborhoods. Agbeve sells iced water at the New Town lorry station in central Accra.

Agbeve is small for his age. He is so small that other water sellers bully him into doing errands for them. They make him get change for their customers and snacks when they are hungry. They also make him carry their loads. Little Agbeve sometimes holds up to 30 sachets of water in his thin arms. He is afraid to refuse to do these errands. He fears the bigger boys will harm him if he refuses.

Agbeve sells water to help his parent's meet all of their financial obligations. He sells ¢15,000 a day of water. Of this amount, he counts about ¢3,000 a day as his profit. He gives all the money to his parents, who use it for food for his brothers and sisters and fees for school.

One recent day, Agbeve wears a long shirt given to him by one of his senior brothers. He also wears a dirty pair of short trousers. He has worn the same trousers for many days.

Perhaps because of his worn and dirty clothing, the boy looks pale and tired. He wishes to wear neat clothing, but what good would such clothing do him while standing in the middle of New Town's main road? Dust from the road and smoke from the cars swirl around the boy, making him look like a ghost.

Agbeve doesn't like selling water. He would rather be out playing football with his friends. But his father forces him to do it, he says, and has beaten him when he has refused to sell water.

The boy often feels hungry while selling water. His mother gives him a mere ¢700 each morning, out of which he must pay for his breakfast and lunch, which he usually takes after school. The ¢700 is not enough to buy him his favorite meal of rice and fish. The money buys him only rice, which he says does not fill his belly.

Agbeve is tempted to take more than ¢700 for his meals, but he fears that if his parents discover his gambit they will punish him, he says.

He says that when his parents beat him, they beat his buttocks with a cane until he bursts into tears. Only when he cries, do the beatings stop. The beatings are now rare because he has learned not to disobey his parents.

Agbeve says he may get rest if he falls sick, but he can only spare a short time for rest. "I have an excuse not to sell water when I am sick," he says, "but even when I am sick my mother will not wait for my sickness to be completely cured before she asks me to resume business."

His two junior siblings also sell iced water before and after school. Agbeve, whose father is a soldier and mother is a housewife, is the fourth born among seven children.

Agbeve's parents say they wish their children did not have to work, but they say their children need to. Agbeve's father says he doesn't earn enough money from being a soldier to support his family, which is large by the standards of Ghana.. He says he wishes that his son Agbeve had more time for play and studies, but that financial pressures on him are a burden that must be shared by the entire family.

Agbeve's work is hard. On a recent morning, he stands beside a vehicle, looking worn out. He wants to take a short nap but since he has not yet sold his "quota" of the iced water for the day, he cannot not go home in order to catch some sleep before attending school.

At a certain point in the morning, the boy grows so tired that he has to put down his load of water on a short wall near the road. After a rest, he returns the load of water to his head. The load of water is so heavy on his head that parts of his hair have been rubbed away from the pressure. He is sad that he is slowly becoming bald.

Agbeve hopes that he can stop selling water four years from now, when he reaches the age of 16. But that seems like a long way off to him, especially during the summer when - with school out - he works from 8:00am to 9:00pm each day.