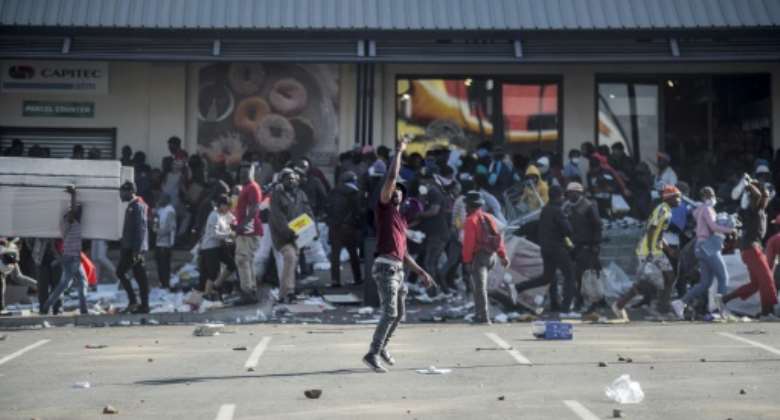 A spree of arson and looting rocked parts of South Africa in July following the jailing of ex-president Jacob Zuma for contempt after he refused to appear before graft investigators. By LUCA SOLA (AFP/File)

South Africa's economy shrank for the first time in a year in the third quarter as the country was hit by riots and tighter Covid restrictions, official statistics showed Tuesday.

After four consecutive quarters of growth, the economy of Africa's most industrialised country contracted by 1.5 percent between July and September compared to the previous three-month period, the Stats SA agency said.

The contraction eroded "some of the economic gains the country has made since the severe impact of Covid-19 in the second quarter of 2020," Stats SA said in a statement.

The economy underperformed "under the twin pressures of tighter Covid-19 lockdown restrictions and a spate of civil disorder in July, as well as several other headwinds", the agency said.

A spree of arson and looting rocked parts of South Africa in July following the jailing of ex-president Jacob Zuma for contempt after he refused to appear before graft investigators.

The unrest in the two most populous provinces of Gauteng and KwaZulu-Natal killed more than 300 people and caused damage worth more than $1.7 billion (1.5 billion euros).

The country worst-hit by Covid in Africa also tightened coronavirus restrictions in July to tackle a third wave of infections.

South Africa is also entering a fourth wave of infections fuelled by a highly-mutated virus variant known as Omicron.

Dozens of countries have blacklisted South Africa, the first country to officially announce the detection of the variant, dealing another blow to its struggling tourist industry ahead of the summer high season.

Manufacturing shrank by 4.2 percent, while agricultural activity plunged by 13.6 percent, its biggest drop in five years.

Household expenditure also decreased by 2.4 percent, with less spending reported on both durable and non-durable goods.

"The looting and closure of retailers in KwaZulu-Natal during the civil disorder resulted in food shortages. Many consumers struggled to buy basic supplies," said the data collector.

South Africa was in recession when the pandemic hit.

A hard lockdown imposed in March last year brought many industries to a standstill, and rolling restrictions have continued to stifle business.

The economy contracted by a record 6.4 percent in 2020, but rebounded faster than expected during the first half of this year.

Real GDP in the first nine months of 2021 increased by 5.8 percent compared to the same period the previous year, and the economy has been predicted to grow by 5.1 percent in 2021.

But unemployment keeps creeping to new highs since coronavirus started, rising to 34.9 percent in the third quarter of 2021.