Reducing the number of beggars 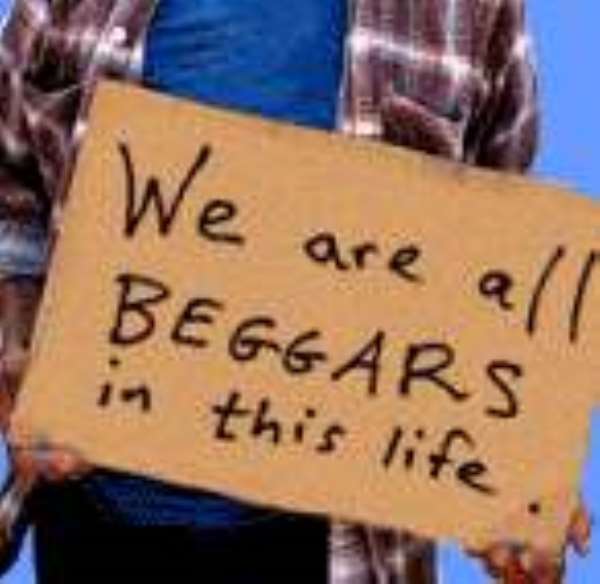 On 5 May 2003 a news item appeared on Ghanaweb.com titled “Begging Is Now Illegal In Ghana”. This pronouncement was made at a public forum in Accra for Persons With Disabilities (PWD) as part of the activities marking the Third National Constitution Week on the general theme: "A Decade of Constitutionalism in Ghana - Strategies for Consolidation." On 17 May 2003 a campaign was launched with the theme “Support the Twin Begging Law, Get Twins off the Street".

It is not easy standing on a street corner in sweltering heat hoping that one out of a hundred people will drop some money in your cup. Or peddling newspapers, chains or items that nobody wants. Yet many people are involved in these activities. I have no statistics on the number of beggars in Ghana and what type of persons are involved in this activity nor do I have any figures to show whether there has been an increase in the number of beggars in recent years.

The news items seem to suggest that the numbers are increasing. Assuming that I have accurately interpreted the news items, then something must be done to arrest the increasing trend. But is legislation the answer? Isn’t there already a law against begging in Ghana? Why another law? The campaign is a good way forward but it needs to reorient its focus on supporting a law about twins and begging. The campaign should be more an education campaign aimed at changing current attitudes towards begging in general and, in particular, by children and not just twins. It should address the safety issues associated with begging especially at intersections and in between traffic and the effects on the country of the activities of beggars in terms of the country’s image and the direct and indirect effects on tourism. It should also address attitudes towards people with a disability. I am aware that under the existing law, any person found begging, wandering or placing himself in any premises or place for the purpose of begging, may be liable to a fine or to imprisonment not exceeding three months or both. I am also aware that several unsuccessful attempts have been made in the 90s to enforce this law. What happened then was that people arrested walked from the court straight back to their patch to continue with their activities as if nothing had happened. This shows that the legislative approach addresses the problem from the wrong end. It tends to simply hide the problem.

Begging is a complex social problem with no quick fix. It is universal. Even some of the advanced nations in the world including the United States of America and the United Kingdom have beggars in one form or the other. It is therefore important to understand why people turn to begging. It is only by understanding the problem that a workable solution may be found to either minimise the problem or at least contain it.

What is worrying is the number of able-bodied beggars in the streets. Among this group of able-bodied beggars are the vocational or professional beggars who believe that they will earn more begging than they would in a regular job. They have made begging into an art form. They have very well made stories, some written on placards, which make it difficult for you to resist making a donation. Some of these able-bodied persons could be seen leading the blind, pushing the lame in wheelchairs or using children to beg. There are few in this group who are driven to this activity mainly because there are no jobs.

Some people with a disability were born with the disability or became disabled because of lack of adequate medical care at the appropriate time eg victims of polio or other childhood illnesses. Yet others become disabled because of accidents mostly motor vehicle accidents. In the case of children a number come from broken homes and have been neglected by their parents or are orphaned. In my opinion the beggars are on the streets because society has failed them. Our social and political systems have broken down and cannot therefore look after them.

Traditionally, disability was perceived to be a punishment by God or the gods for some evil committed by the person or the person’s kin. Some of the churches also continue to have these beliefs and continue to perpetuate such beliefs in sermons. The result is that with very low self-esteem and without access to food and shelter, the life of a person with a disability in Ghana is one of survival.

In days gone by people born with a disability were abandoned. Those that were not abandoned were hidden from public view because parents were ashamed of these children. Traditional society thus generally frowned upon people with disability. These ideas are still around even with the increase in education and technology. We need to change this attitude towards people with a disability and improve upon the structural impediments that prevent people with a disability from being able to play a meaningful part in society. Majority of them cannot work because most employers would not employ them or even if employed there are no facilities to help them perform their duties. Many cannot study because of structural problems and some have difficulty moving from one place to the other.

In relation to children we have a situation where basic education said to be free has gradually got out of reach of the majority. Many children whose parents’ cannot afford the fees charged end up being dropouts and becoming street kids. This short falls in education affects and hinders development.

Ghanaians are noted for their hospitality and the Akan say that the “stranger does not need to sleep on the street”. The community always took care of its poor, to a degree that had no parallel in any other society. The proverbial Ghanaian hospitality was alive. We took care of the poor, the unemployed, children and those disadvantaged in society. We shared meals, provided shelter and helped in various other ways. This generosity used to pervade the society; we were all each other’s keeper. However, a continuously high level of unemployment, high cost of living, and an economy that has double-digit inflation, coupled with a society that has lost it traditional values, have combined to undermine the overall economic and political context and weakened those structures that helped to care for the needy. We hide our food from others and there is a tendency in the Ghanaian society of today to respect people who have money, people who have wealth. If you are not wealthy you have very little respect. Thus people with a disability and children are generally in the lower strata of the society. They are not valued and have very little self-esteem.

Begging does not fundamentally arise out of the urban space, and hence cannot be resolved within its confines alone. It is important to attempt to understand the main causes of the problem and then and only then can appropriate strategies be developed to address the problem. The “one size fit all” approach will not work. The real solution, perhaps, is to recognise and address the structural and physical issues in society, expand livelihood options in the national economy, reduce unemployment and put in place programs and strategies to improve the lot of people with a disability bearing in mind the constitutional provisions in articles 17, 24, 25, 29 and 38 of the constitution.

Another key challenge is the attitudinal change. This can only be done through education. The churches and civil society have a role to play in this exercise. The government should also pay more attention to the problems and interests of people with a disability and put in place well resourced rehabilitation programs. This could be done in partnership with various communities and the peak body for people with a disability.

We should also take steps to reduce the number of motor traffic accidents as these have caused many people to become disabled. Too many lives are lost on Ghanaian roads in a year. In the Australian Capital Territory a total death toll of 15 on the road in a year will result in alarm bells ringing.

We should also not forget those beggars who are mentally unstable and have either escaped or being discharged from mental institutions. The whole area of mental health needs urgent attention. Views expressed by the author(s) do not necessarily reflect those of GhanaHomePage.