December 31, The Day Democracy was Aborted 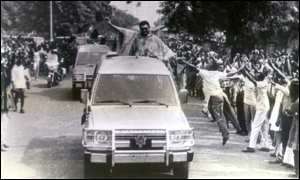 Exactly 21 years ago, our democratic experiment, which was still in an embryonic stage, was brutally aborted by Flight Lieutenant Rawlings and a few men from the so called Boys company, notably L/Corporal Gyiwa, Corporal Adebugah and Sergeant Aloga Akata Pore. In the stead of a constitution, that made the people the sovereign, these military minions proclaimed a revolution that vested all powers in the hands of a PNDC, chaired by Rawlings and whose membership, we were told, included W/O Adjei Buadi, Sgt Aloga Akata Pore, Amartey Kwei, Cris Atim and a few others with dubious pedigree. Most Ghanaians, make that well-meaning Ghanaians, were justifiably outraged and incensed by these turn of events. The following day, Chris Asher, editor of Palaver wrote a scathing editorial condemning the constitutional abortion as puerile and lambasting the leaders of the revolution as pseudo-iconoclastic morons, who must be rejected by the good people of Ghana. The revolutionaries responded by closing down the offices of Palaver, giving Asher and his staff a severe beating and in a bid to forestall such future editorials took over the state owned media. The Daily Graphic, which was branded as an enemy of the revolution, was taken over by the "People" and renamed the People Daily Graphic.

The fate of Palaver, Chris Asher and the Daily Graphic was only a harbinger of the reign of terror and culture of silence that was to come. However, it is useful to digress and point out some of the democratic gains that had been chalked under the Liman PNP/CPP, something I do reluctantly because of my well known PFP/UP pedigree.

On his ascension to power, Liman sought to exploit a loophole in the constitution to replace chief Justice Apaloo with his own choice. The opposition in parliament rejected this move and boycotted the parliamentary vote that decided the matter (i.e., to vet Apaloo). The PNP MPs voted 71-0 to proceed to vet Apaloo, which would have laid the foundation for him to be replaced. At this point, citizen Amoako Tuffuor filed a writ at the SC challenging the powers of parliament to vet the incumbent CJ Apaloo. The SC, presided by Sowah, granted the reliefs sought by Tuffuor and held that Apaloo became the CJ when the constitution came into force. Case closed and a clear victory for democray and the seperation of powers!

Even more democracy-enhancing, even if humiliating for the Limann government, the PNP majority parliament rejected a budget submitted by the Limann/PNP executive thereby making it very clear that parliament had the power of the purse and will exercise that power independent of the executive. Ghana was really on the democratic path, as further evidenced by the mushrooming of high quality newspapers including Legon Observer, Catholic Standard, Palaver, Pioneer, Echo, etc.

On other fronts, Ghanaians had little to complain about. Secondary school fees were 48 cedis a term, for those not on CMB scholarships. Sixth formers simply took the "A" level and 3 months after, they were, if successful, invited to one of the 3 universities, without having to pay a bribe. In fact, you knew where you were going once you got your results. And the state media published university admissions every september as another tool of accountability.

At the university, tuition was still free, students were given 21 cedis every week for their meals, each room had 2 students (a few final year or graduate students had a room of their own), and students were given a loan of 700 cedis. My first loan of 700 cedis allowed me to buy a guarantee shoe, 2 corduroy pants, 1 krimpleen and 3 shirts. In addition, I had about 300 cedis left that allowed me to be a regular attendant at the snack bar, where a jug of bubra was still retailing at 4.50. Breakfast at legon was .60 pesewas and lunch/supper was 1.20 each. If you opted to eat outside, you could still, on 3 cedis, have 2 nice meals at the "banku stand" or the "yor ke gari stand behind volta" or for the fufu eaters at the bush canteen!!

All that was to change after December 31, 1981. The PNDC's philosophy became apparent when it froze all accounts with 50,000 cedis. Many people meeting this criteria were asked to appear before a CVC, whose members could not distinguish between income and wealth. As a moonlighter at Charles Ocansey & co, I spent most of my time on clients who had been summoned before this dreaded commission, known for its lack of rules and wisdom.

But even the common proletariat was not spared. To mop out liquidity in the system, anyone who had any 50 cedis note was asked to surround that to the nearest bank without fail. What a fatal blow to the banking system of a country!

At companies, factories, schools, private firms, PDCs and WDCs sprung up as a way of dividing the country between people and non-people, workers and management. PDCs were firing management and "managing" affairs of companies. The WDCs were pricing items for farmers, bakers, etc. Many makola women, farmers, peasants, etc whose commodities were "overpriced" were summarily whipped, sometimes, in the vagina, by drunken soldiers, I mean by "people."

To further shock the nation, in June 1982, 3 judges and a retired major were abducted from their homes and brutally murdered and buried at Bundase. The common thread about these judges were their involvement in setting aside prior AFRC judgments. In the case of the retired major, he was the head of GIHOC when Amartey Kwei was dismissed.

A now visibly shaken Ghanaian populace had seen enough. They knew right away that these murders, which took place during curfew hours, were done with the knowledge and complicity of some members of the PNDC. The PNDC commission to investigate the matter was rejected and pressure from within and without led to the formation of the SIB. The SIB reported that: (1) Kojo Tsikata, #2 in charge of the revolution was the mastermind; (2) Chairman JJR had been briefed by Kwei and knew who the murderers were in spite of his utterances on TV; 3) Kwei, Amadeka, Senyo, Tekpor all PNDC security operatives were directly involved in the murder!

Meanwhile, chairman JJR attempted to link Akata Pore to these senseless murders in order to exonerate Kojo Tsikata. When Pore protested, he was arrested and removed from the council. From that day, anyone with pro Akata Pore sympathies was purged from the military. Adebuga, Gyiwa, Aliu, Awaah, etc and many others, estimated in the hundreds. Their civilian counterparts were not spared either: Chris Atim, Zaya Yebo, Nedebugre, etc. were all outlawed.

Hell broke loose in Ghana. The professionals went on strike, the students went on strike, nurses, etc. At each turn, the PDCs and WDCs were sent in to discipline the striking workers and to take over the functions of the professionals. The courts were replaced by the Tribunals! Naturally, this was followed by mass emigration from the country, for anyone who could get exit permit.

And while these murders, intimidations and confiscations were going on, the revolutioaries were chanting socialism and Green Book Gaddafism. Of course, the international community boycotted such a barbaric regime. The shortages mounted, the economy was dislocated, the health infrastructure crumbled, agric sector collapsed, banking collapsed, industries shut down, school system collapsed and morals were abandoned.

But there were some winners! Those who presided at the CVCs. Those who aligned themselves with the revolution including Obed Asamoah, Ahwoi, Botchway, Selormey Abodakpi, etc. But the biggest winner of all was chairman John Jerry Rawlings. After his mayhem, he walked away with 5 state houses, 20 cars, and a full pension. His kids are educated in some of the best schools in the world. His 25th marriage annivessary cost 2B cedis. He recently took delivery of 4 luxury SUVs and paid a cool 500M cedis in taxes.

We have allowed one man and his revolutionary fantasies to literally destroy our country while enriching himself. The damage that has been done to the country is permanent and will take decades to fix. Hopefully, we will use this day as a reminder of what happens when 20M people watch on helplessly as a moron, with a gun, determines their destiny.