Cattle in the front line in troubled eastern DR Congo 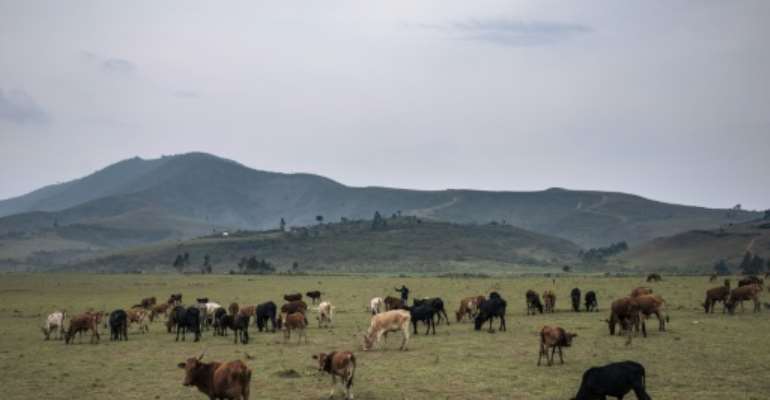 Cattle herding is a major part of the economy in eastern DR Congo. By ALEXIS HUGUET (AFP)

Cattle farmers in eastern DR Congo prize their fine long-horned animals -- sturdy beasts which once gave their region the nickname the "land of meat".

But for many herders, every day brings its ration of fear for the safety of their animals from armed groups.

Bosco Ndaura, secretary of an association of cattle farmers in Bunia, the main town in troubled Ituri province, said cattle rustling and killing were rampant.

Ndaura was speaking at a ceremony by the Congolese army to return about 100 stolen cows to their rightful owners.

Such events are out of the ordinary -- rustled cattle usually disappear for good, or end up being butchered by their thieves.

The situation is so bad that many herders have moved north with their cattle into the neighbouring province of Haut-Uele, where security is better.

The loss is tragic, said Ndaura, who himself raises cattle.

"In the 1980s, Bunia was called the 'land of meat'. Today, it's no longer the case -- the animals which used to produce the meat are no longer there."

More than 120 armed groups plague the eastern provinces of the Democratic Republic of Congo, many of them a legacy of bloody regional wars a generation ago.

Ituri and neighbouring North Kivu are bearing the brunt of the violence.

In May the government placed both under a "state of siege" -- an emergency measure aimed at strengthening security, in which top civilian officials were replaced by senior army or police officers.

Ituri itself has a long history of ethnic feuds, some of which are rooted in long-standing herder-farmer disputes over cattle.

Fighting between the Hema and Lendu communities between 1999 and 2003 claimed tens of thousands of lives, and was only quelled by the intervention of a European Union peacekeeping force, Artemis.

The Hema are predominantly herders, while the Lendu are sedentary farmers -- a rivalry that has a parallel with the Tutsi-Hutu divide which fuelled the 1994 genocide in Rwanda, although the scale of the bloodshed is not comparable.

After some years of calm, violence kicked off again in 2017, blamed on an armed group called the Cooperative for the Development of the Congo (CODECO), which claims to defend the interests of the Lendu.

CODECO, which has since divided into splinter factions, is today blamed for cattle rustling by Hema herders, who also single out two armed groups.

They are the Patriotic and Integrationist Force of Congo (FPIC), which claims to represent the Bira ethnic group, and the Ituri Popular Resistance group (FRPI), once the militia of the Ngiti group in the Lendu community.

"They cut up the cows, they kill them -- they don't even spare the cowherd," said cattle herder Isaac Kamwenda, who recovered several cows that the army had seized from the gunmen in recent clashes.

Ndaura showed pictures of cattle carcasses rotting in the bush. Around 100 animals were killed last Saturday alone, he estimated.

The army has launched an offensive against the ADF, a suspected jihadist militia accused of killing hundreds of civilians. By ALEXIS HUGUET (AFP)

The militiamen kill the cattle for food or sell them on -- part of a growing traffic in the region.

"The government has to help us and our cows," said herder Jacques Kisembo. "The state of siege is not helping us."

Adding to the army's burden is the growing death toll inflicted by the Allied Democratic Forces (ADF) -- a historically Ugandan rebel group that the so-called Islamic State group says is now its branch in central Africa.

The ADF have not been accused of cattle rustling, but of having killed nearly 1,000 people in Ituri and North Kivu in the past year.