He Wanted To Overthrow Rawlings: How Asare Pianim 'Suffered in Rawlings' Hands' After Failed Coup 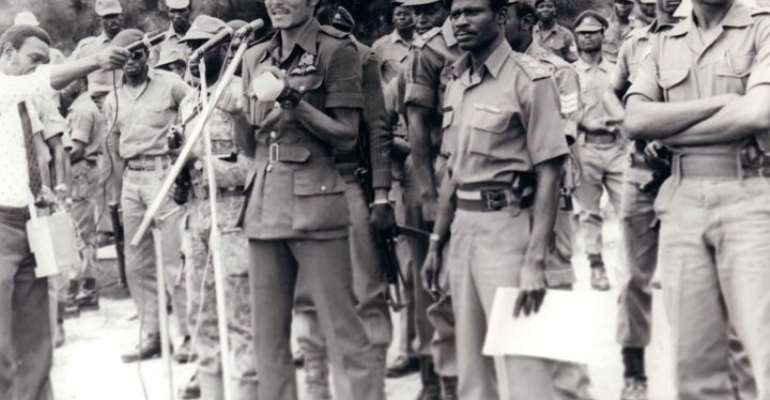 A reader may ask: "What inspired the writer to come up with this historical title?" The answer to the above question spreads throughout the entire article, and by the time we are comprehensively done with it, we will have love to appreciate it in an unforgettable manner. I just however feel that our dear country, Ghana has gradually graduated from an era where almost everyone, particularly politicians and Government officials desired so much for power and authority, in a very fierce way to an era where democracy is collectively uniting us but at the same, causing a lot of havoc in our Developmental Continuum.

You know, during the First, Second and Third Republics, politicians found it so difficult to win the trust of Ghanaians because they [the citizens] had a perception that there was no consistency in our Governance system, since everyone was so eager to win power and become the country's overall leader, without paying much attention to the progress of Ghana in the next 50 or 100 years. The only exceptional personalities who remain on top of Ghana's book of development are Osagyefo Dr. Kwame Nkrumah and Jerry John Rawlings. Although they are dead and gone, their love for this country, coupled with the kind of work they did continue to live on. You may agree or disagree with me to some extent, but I believe as flesh and blood, we all have our weaknesses and limitations, in one way or the other.

I do not intend to bore you with so many wordy statements, but introducing these great men in this discussion will enable us transition well to the heartily conversation we are about to unfold this day.

November 23, 1982, something significant worth discussing and sharing happened in Ghana's capital, Accra. Guess what! It was an attempt by certain group of people to overthrow the Ruling Government. Shooting occurred at Burma Camp, which killed two people on the spot. These guys were trying to avoid capture, and fortunately, some of men involved in the coup attempts fled the country. Subsequently, the Government made an announcement that indeed a Coup Attempt had been prevented. In March the following year, 22 persons were brought to trial before the National Public Tribunal, where some of them were tried in Absentia on charges of "preparing or endeavouring to overthrow the Government or "abetting to overthrow the Government".

However, during the jail-break in June 1983 another coup attempt occurred. Meanwhile, 6 or the defendants associated with the coup managed to escape from prison but unfortunately three of them were recaptured and painfully executed.

The only person who was pending conviction in court was Andrew Kwame Asare Pianim, a renowned Business, An Economist and the Former Chief Executive Officer of Ghana Cocoa Marketing Board.

Conclusively, upon a rigorous judicial process and criminal trial in court, finding by a judge or jury revealed that Pianim not guilty. It means that the prosecutor failed to prove his or her case beyond a reasonable doubt, not that Asare Pianim was innocent. However, a testimony by a witness said that Asare Pianim attempted to contract some Ghanaians and a Member of a British Commando Unit, the Special Air Services to overthrow the ruling Government.

Some reports reveal that he was sentenced to 18 years in prison, but attempt was made by the government to sentence him to death. But fortunately for him, one of the five-member panel sitting on his case suddenly left the country. It required a unanimous decision per the National Public Tribunal Law, for one to be sentenced to death. That was the main reason he was not given that serious punishment.