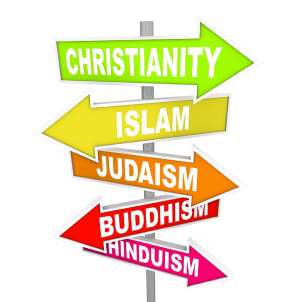 On August 13, at 7:33 p.m., I saw my name tagged under a post in our Junior High school’s WhatsApp page. My settings aren’t on an automatic download so I’d have to issue a command before any media would be downloaded. Like many of you have done to prevent any frivolous media from uploading into your gallery.

Intuitively, I wanted to vent my spleens at a go. But I didn’t know if I should type or audio my sentiments. Because some fluff headed people enjoy sowing seeds of discord thus I suspected a religious foul play. Simultaneously, I was thinking about the question the person had asked; it could be a genuine one regardless. Anyway, I settled on being silent for some time. Perhaps I could be carried away should I type or record anything out of anger. After some few minutes, I did translate only the Azan into English so that the discerning could hear and see for themselves if the message of the Azan, in anyway correlates with what the two were doing.

The translation I gave opened the floor for a further discussion. I was thinking that grownups, at this stage of our lives, we must all understand one thing — that evil isn’t an article of faith in any religion. ‘Had we known our sins, we would have pelted ourselves with stones.’ Muslims rape. Christians rape. Muslims fornicate. Christians fornicate. Muslims take and give loans with interest. Christians do it too. Christians commit murder. Muslims also kill unlawfully. Christians rob. Muslims rob as well. Unless you’re ready to say that the verses speaking against fornication, adultery, or pornography have been expunged from the Holy Bible.

Nevertheless, when evil surfaces from the camp of Muslims in this country and beyond, you’re likely to hear our brothers — Christians — using it as an opportunity to malign and kick all Muslims in the head. They will flood mainstream media headlines, describing all Muslims as rapist, abusers, armed robbers, murderers etc. Conversely, we’re yet to see any Muslim referring to the teenage murderers, Nicholas Kini and Eric Nyarko, who strangled the late Ismael Mensah, aged 11, to death, as Christian assailants. Similarly, when Charles Antwi nearly took the life of former President, H.E John Dramani Mahama, on July 26, 2015, at the Ring Way branch of the Assemblies of God church, no Muslim was recorded anywhere hurling on Christians that they’re murderers who wanted to take the life of the President, even shamelessly in a church. We’ve heard about a pastor giving Holy kisses. Now it’s Richard Appiah, Ghana’s renowned cannibal. He even had stored human meat in his fridge. What’s the talk about? ‘He’ didn’t do well. He’s not sound. No Generalization. And Christianity is having a good sleep.

So why is it that when some unscrupulous name bearing Muslims commit some of these crimes, we have Christians feeling so agile to use it as a window of opportunity to attack the sanity of every Muslim? They take pride in prodding Islam. What for? Or to say ‘all Muslims’ are terrorist like giving the dog a bad name and hanging it? Can we foster peaceful cohabitation if we are threading such a dishonorable way? It’s high time the bad-mouthing, and denting the image of Muslims is stopped. Such is fendish and odious!

We’ve not seen any religion which has made it an article of faith for its followers to commit crime. Evil and crime do not have a religious cloak. Therefore, when a Muslim commits a crime, single him out, and vent your spleens on him as an individual, just like how Muslims do when a Christian fouls the law. Stop hiding behind the colorful catchphrase that Ghana is a Christian majorly country, and thou be abusive; hurling wholesale insults deliberately, and denying Muslims their rights, for God sake.

But if you desist not, as you’re apodictically making it seem, you’d all need to agree with Sheikh Aremiyaw that ‘Religious tolerance in Ghana is merely a facade’. We’ve come a long way. Let us grow small!