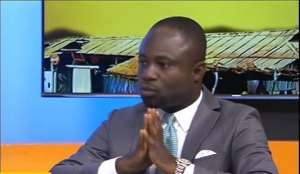 The Ranking Member on Parliament’s Health Committee, Kwabena Mintah Akandoh, is not enthused about a mere pledge by Sheik Al Makhtoum to refund $2.4 million to Ghana over the botched Sputnik V vaccines procurement deal.

He also insists the pledge to pay back the money does not exonerate the Minister of Health, Kwaku Agyeman Manu.

In a purported letter dated 5th August 2021, Sheik AL Maktoum replied to a letter from the Minister requesting a refund of the amount covering the cost of unsupplied doses.

He thus asked the Ministry to confirm the amount and provide account details through which the refund should be processed.

“We acknowledge receipt of your letter, Ref No. MOIVOM/LL1/7/2I, dated 2nd of August 2021, with a formal request to refund the remaining amount of the non-supplied doses from the 50% advance transferred to our accounts.”

“We, hereby, request to kindly acknowledge and confirm the above-mentioned amounts to be refunded, further to which we shall initiate the refund process to your bank account. Please share with us the bank details where the refund needs to be processed.”

However, Mr. Kwabena Mintah Akandoh is not satisfied with the latest development.

Speaking on Eyewitness News, he said the promise alone isn’t useful in the scheme of things.

“The pledge you are talking about does not find space in any scheme of things because there has been a clear exhibition of bad faith right from day one because the Minister for Health said there hasn’t been payment of any monies when he appeared before us and that Ghanaians are asking you to refund those monies, and you are pledging.”

The Health Minister, who is currently on a two-week leave has been under massive pressure to resign following the report of the parliamentary Adhoc Committee that probed the deal.

What did the report say?

It emerged that Ghana paid more than US$2.8 million to Sheikh Al Maktoum for the procurement of the Sputnik V vaccine.

This is contrary to an earlier claim by the Minister of Health, Kwaku Agyeman Manu, that the state has not expended any money towards the procurement of the vaccine through Sheikh Al Maktoum, a businessman based in Dubai.

The nine-member ad-hoc parliamentary committee set up to probe the controversial Sputnik V vaccine procurement deal in their final report indicated that US$2,850,000 representing 50% of the US$5,700,000 owed to Sheikh Dalmook Al Maktoum for the eventual supply of 300,000 doses of Sputnik V vaccine was actually paid to him.

The committee, therefore, tasked the Minister of Finance, Ken Ofori-Atta to retrieve the money that has been paid.

As Ghana struggled to reach its target of vaccinating 20 million citizens, it emerged that the government was using the services of middlemen to procure 3.4 million doses of Russia’s Sputnik-V vaccines.

The issue first came to light when a Norwegian news outlet, Verdens Gang, reported that Ghana had requested to purchase the doses of the Sputnik V vaccine through two businessmen who are selling it to Ghana at $19 per dose instead of the $10 per dose on the international market

The Minister of Health, Kwaku Agyeman-Manu, who is a board member of the GAVI Vaccine Alliance, admitted that he did not seek cabinet and parliamentary approval before engaging the private individual for the procurement of Sputnik V vaccines when he appeared before the bi-partisan committee.

Meanwhile, the company that agreed to supply Ghana with the overpriced Sputnik V vaccines has t erminated the contract it had with the country, according to the Minister.