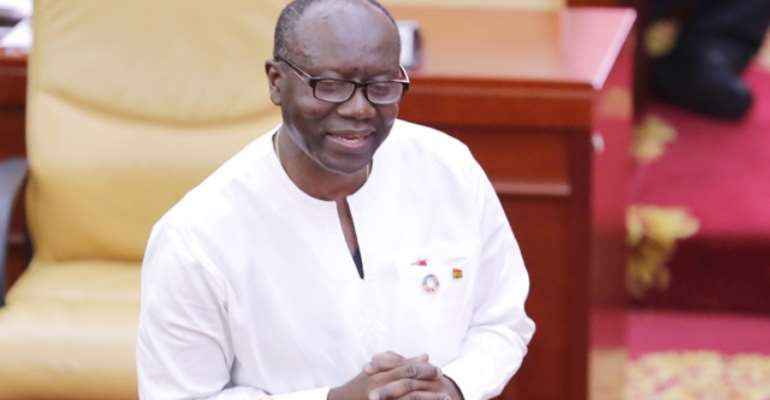 Finance Minister, Ken Ofori-Atta Atta, is expected to present Mid-Year Review of the Budget Statement and Economic Policy of the Government of Ghana and Supplementary Estimate for the 2021 Financial Year next week Thursday, 22nd July 2021.

The minister is also expected to answer questions from North Tongu MP Samuel Okudzeto Ablakwa on cost of President Akufo-Addo’s trip to France, Belgium and South Africa on a chartered private jet next week.

These were contained in the Business Statement for the ensuing week.

Mr. Ofori-Atta is expected to answer questions bothering on the President’s trip before the mid-year budget review presentation.

There is however a counter question standing in the name of NPP MP for Dormaa East, Paul Apreku Twum-Barimah on the cost of air travel of President Mahama on chartered flights between the period 2013 to 2016 as a president.

The Minister will also answer question from Builsa South MP and deputy ranking member for the committee on education Dr. Clement Apaak on whether government took loans to finance the implementation of the Free Senior High School policy.

Answering questions from North Tongu MP Samuel Okudzeto Ablakwa, Mr Nitiwul argued that the safety and security of the president was the ultimate factor in deciding the type of aircraft used for his travels.

He argued the Presidential jet is handicapped in handling long distance travels which will require refuelling. He also revealed that the jet lacks enough luggage capacity as well as a place for the president to shower while onboard the presidential jet.

“The decision to travel to long and multiple destinations such as the president travelling to France, Belgium and South Africa, will always require a larger aircraft even when the Falcon is airworthy…When the President is travelling with more than 20 people for a business trip…you will need more than just a Falcon, otherwise, the people will have to go more than a day ahead of the president to prepare themselves.

“The president himself must go more than a day ahead to prepare himself because no president can shower in this aircraft, so you can’t move from this aircraft straight into a meeting,” Mr Nitiwul said in Parliament on Wednesday.

The Member of Parliament for North Tongu, Samuel Okudzeto Ablakwa in a Facebook post last month alleged that President Nana Addo Dankwa Akufo-Addo spent a whopping Ghc2.8m on a private jet on his recent trips to France and Johannesburg.

The ranking member on the Foreign Affairs Committee of Parliament alleged that the president decided to rent an aircraft that cost the Ghanaian taxpayer £15,000 an hour.

He further added that the President left Accra for Paris on the 16th of May and then from Paris to Johannesburg and back to Accra on the 25th of May accumulating a total of 23 hours amounting to a colossal £345,000. At the current exchange, the amount totals GHS2,828,432.80.