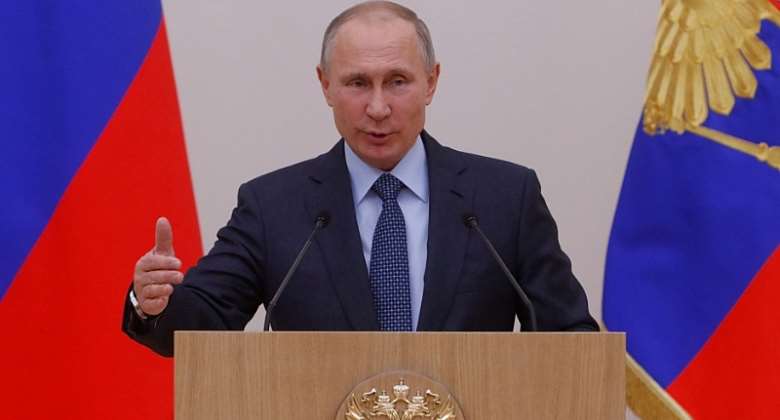 Almost 450 journalists have been accredited to cover Putin's his state-of-the-nation address, information relating to the media representatives uploaded on Kremlin website. The address will be broadcast live on Rossiya-1, Rossiya-24 and Channel-1 television channels.

Social distancing and wearing masks will be compulsory throughout the event, according to reports from the Kremlin. It was also reported that in line with requirements from the Russian sanitary watchdog Rospotrebnadzor, the accredited journalists will be allowed to attend the event only if they have three negative coronavirus tests - four to five days before the event (April 16-17), two days before the address (April 19), and the third test made on April 20.

During a special consultative meeting ahead of the state-of-nation address, Putin pointed out that the speech document would traditionally outline strategic guidelines for the country's socioeconomic development, and priority tasks that may require a concerted effort on the part of federal government bodies and regional and local governance teams.

He underlined the fact that “it is the systemic approach and consistency of our goals that are important, along with continuous fine-tuning of the mechanisms and tools which are at our disposal and which we create together for the joint work.”

On social issues, he reminded them of social questions about such important and significant initiatives such as support for Russian families, including new benefits for children under the age of three and under seven, and increasing the affordability of housing through special mortgage programmes for families with children.

Furthermore, his address will focus on new decisions that were also made on the digitalization of healthcare, on the provision of subsidized medicines (this highly sensitive and painful topic makes its way onto agenda from year to year); an instruction was given to connect Russian schools to high-speed internet and to provide free access to domestic electronic services.

Putin promised to discuss measures that have been proposed to stimulate business and investment activities, reform of the control and supervision activities, and initiative to clear the Russian legislation from outdated norms and requirements in many sectors.

He further pointed out at the meeting that there was the need to assess qualitative changes in people's lives, efforts taken on the development of regions, cities, and districts, and for the economy and the social sphere.

Putin stressed the importance of always analyzing the reasons behind mishaps and even failures to prevent them in the future both in planning and in resolving tasks.

“We must acknowledge honestly and bluntly what we have failed to achieve so far, where our efforts are still stalled and where we continue to face difficulties. Taking into account the objective picture, we must adjust the actions that are not effective enough or suggest a different, more effective solution to a problem. This is exactly what our people, citizens of Russia expect from us,” he told the meeting.

In summary, Putin's address will primarily focus on current achievements, will outline future domestic social and economic development plans and strategies, will offer insight into key foreign policy objectives and will bring out the challenges and some possible steps in resolving both internal and external setbacks.