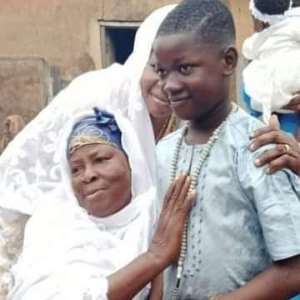 In time past, a young person will not accept a gift from a stranger or neighbour. It was not a case of fear or lack of appreciation. It was the difficulty in providing answers to who the giver was? How did you obtain it? And for what purpose? We were humble and more materialistic was not our priority. Parents, families were contented with whatever they have.

In today’s world, a mother asked her 12-year-old girl for money or request for her phone to make a call. Sometimes the cost value of the phone is more than two years of the annual family earnings. The source of obtaining the device is not an interest of parents, rather how nice and attractive the phone is. Sadly, some parents even insult their sons and daughters for not owing enough material gains and compare them with their colleagues who are living a luxurious life.

Some mothers and families are interested in trading their girls to wealthy people. Visit a lady with a big car and hold an iPhone and you will be accepted to be their in-law. We have introduced a culture of greed and selfishness in our society where wealth has become synonymous with nobility.

No one questions who a young man without paid job or professional skills suddenly, has a lot to himself. The quest to make money is the race almost every Ghanaian old and young are pursuing. What matters to us now is made money and your respect and honour will increase.

The problem that we are confronted with, is a result of our moral corruption, and society has failed to guide the masses. We claimed to be wise than our forbearers rather lack common sense and continue to destroy our future, life with desperation and greed.

We all appear to be disgusted with the ritual killing of the 10-year-old boy by two teenagers. The questions we need to ask; every day in and out missing persons, are we able to get all of them reunited with their families? Aren't most of the countless murders related to ritual killings? Why are people so bent on making money?

It is worth noting that, most of the media houses are not giving us compelling content and rather interested in profit maximization. In Ghana, every English word is becoming a name of a TV/Radio station. There are countless spiritual advertisements. Either a prophet of doom taking advantage to woo people with his so-called prophetic blessings or a so-called Mallam in the disguised of Islam. The third group has been the majority most go with the title Nana. Claiming to be a spiritualist that can conjure money to interested people. The actions influence a lot of people since having monies will keep them out of poverty and ensure a quality life. This should not be the case; so why can't government go to them to conjure monies instead of going to borrow outside the country?

Their actions have heightened the desperation of Ghanaians to make money. One can only wonder the number of people subjected to ritual killings because of these 'satanic beings' or tricksters.

It is a pity that the National Media Commission (NMC) wants Ghanaians to believe they have no control and power to stop this nuisance money doubling advertisements on the TV/ Radio. If the argument is on content regulation. The question therefore should be who is in charge? We need to have clear-cut institutional oversight responsibilities. Why should the NMC dish out Radio and TV licenses without knowing the content these stations will be broadcasting? It is a disturbing development that we need to consider.

Parents, the Media and NCA, and NMC have failed the Ghanaian society and must take responsibility for the actions of the many wrongs we are witnessing in recent times. We cannot bring up children who think money is life and money is everything. This is not the typical Ghanaian values. It is therefore important for the regulatory agency including the government to have a hard stand on content and media control.

Concerning the teenage murderers in Kasoa, the death penalty should be the only punishment that can bring finality to the ongoing debate regarding the fate of the ritual murderers. We cannot compromise in administering justice. People must always face the full rigour of the law. The issue of them been juvenile should not be enough consideration. Let’s hung them to death and move on. Life for life, I have full admiration for the natural law of justice, especially when evidence is beyond contradictions. Life imprisonment burdens our country. It is not enough to heal pains and emotions.

12 organised crime suspects busted for carjacking, robbery a...
57 minutes ago