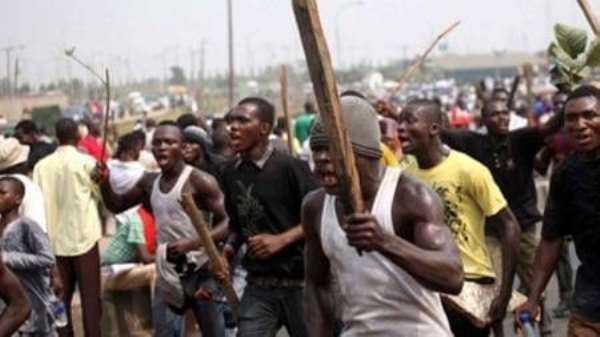 The statement by President Akufo Addo that gay practice will not be allowed in Ghana under his watch is gaining momentum.

Youth groups nationwide have vowed to fight the canker with their last blood to ensure homosexuality will not have a place in Ghana.

To that end, a man, believed to be in his 30s was nearly lynched by the youth of Aboabo, a subub of Kumasi in the Ashanti Region.

The young man whom the youth have been suspected of being a gay practitioner, was alleged to have been caught red handed by his landlord on Saturday March 13,2021, half naked with another male, believed to be his same sex partner.

According to the landlord, he caught one Seidu Awal and his partner naked in the room romancing each other and were about to start love making.

The landlord, Mr. Baba Amadu started shouting and screaming on top of his voice which attracted people nearby creating a scene into the house.

The landlord said he only entered Seidu's room to remind him of his rent which he (Seidu) had not settled for the past six months. I never knew or suspected Seidu to be involved in such abominable and disgraceful act, the landlord added.

The Aboabo youth dragged the two same sex lovers and tortured them severely. They were made to knell down in the scotchy sun for several hours and paraded them in the Aboabo neighbourhood for sometime.

They were later stripped naked and beaten with canes, sticks, belts, iron rods and also pelted with stones. Luckilly, Seidu managed to runaway leaving behind his partner.Seidu's partner was later whisked away by the youth and nothing was heard about him again.

The youth had vowed to search for Seidu who is at large anywhere he is to teach him a lesson. A member of the youth was heard saying that gays deserve to be killed.

They have vowed to team up with other anti gay groups in Ghana to cleans their respective communities and Ghana at large of LGBTQ practices.

"No gay practioner or supporter will go scot free as we shall widen our scope and intensify our search to get rid of anyone found or suspected to be gay in our communities.

"Gay practice, they say is abominable, disgraceful and disgusting act which must not be condoned in Ghana if we don't want the anger of God to befall the country."

Speaking to one, Alhaji Sofo, an opinion leader in the community, vowed that they will not accept seidu and his colleagues in the community to spoil their children for them. He asked the government not tolerate any gay practice in Ghana.

In a related development, a 27 year old suspected self styled gay rights activist, Safowan Awudu, also incurred the wrath of the Aboabo youth.

Safowan Awudu was alleged to have been advocating for the rights and freedoms of homosexuals in Ghana. Safowan reacted angrily to the way and manner Seidu Awal and his partner were badly treated.

According to source, Safowan had been secretly preaching against the ill treatments and discrimination against LGBTQ persons in the community for long.

The Aboabo youth, peeved by the stands taken by the self styled activist descended angrily on him. The youth finally went for him but luck was on his side as he received a tip off from a neighbour leading him to escape.

The youth moved to raid his family residence with machetes, stones, sticks and other offensive weapons, claiming that Safowan's soft spot for gays was drawing the Aboabo township into public ridicule and that he and those he was vouching for deserved to be chased and banished from the community.

According to a member of the youth, they had sent several warnings to Safowan to desist from advocating for homosexuals. "Homosexuality is a great sin before God and Allah and we cannot accept its practice in our area.

"Safowan, did not heed to our warnings to desist from towing that line of been a gay rights advocate hence our attack on him". His actions and inactions on gay practice and the way they are treated, made some of us to believe he is an LGBTQ person," a member of the group stated.

The Attack on Safowan happened few days after the President Akufo-Addo declared that Ghana will not practice homosexuality.

The President, speaking at a church service at Koforidua, in the Eastern Region stated categorically that gay practice will never happen under his watch.

In Ghana, just like other African countries, LGBTQ practice is frowned upon and described immoral and illegal practice in the country.

Ghanaians view homosexuality as something that is morally sinful which does not conform to the values and traditions of the Ghanaian culture. LGBTQ persons therefore face constant condemnation, discrimination, anger, threats, outrage and attacks.