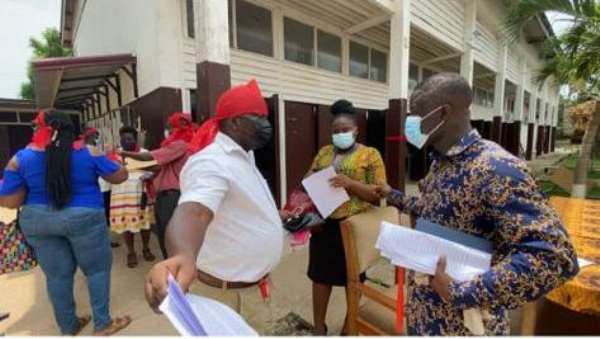 Academic staff of the Holy Child College of Education in Takoradi in the Western Region have stated, in unambiguous terms, that they are not prepared to assist and work with the newly appointed Principal, Victoria Ghanney.

According to the staff, the newly appointed Principal does not possess the relevant qualifications, managerial competencies and skills as stipulated in the College of Education Act 2012, Act 847 that will permit her to head the College.

Addressing a charged press conference on campus, Secretary to the Convocation Lawrence Ewusi-Mensah said the College will resist any attempt to foist “anyone who is not prepared academically and managerially to serve as our head”.

“First and foremost, she does not possess a research postgraduate degree preferably the terminal, which is a Doctor of Philosophy degree as enshrined in the College of Education Act, 2012, Act 847… Our investigation has shown clearly that the appointee has just one-year online non-research MSc degree, a qualification which will not even allow her to teach as a College Tutor.”

Mr. Ewusi-Mensah explained that even though “the Council claims the appointee was a Senior Lecturer in a university, that lectureship position has arisen as a result of her long service but not on academic qualification which is a key essential prerequisite entry requirement for every applicant”.

“Our Act also stipulates that an applicant to the position of the Principal should have a rich administrative experience, that is the applicant should have held a relevant senior management position for at least five years with proven leadership skills. From the Curriculum Vitae of the appointee selected by the Council, the appointee has not headed any senior management position before her appointment so her appointment is a clear violation of the College Statutes.”

Mr. Ewusi-Mensah further stated that per the results of the interview conducted for applicants to the position, Mrs. Ghanney came third and questioned why no one was appointed among those who placed first and second.

“In the interview, our acting Principal, Mr. Kojo Amuah Prah, came first followed by our Dean of Student Affairs and also the acting Vice Principal, Dr. Francis Hull Adams. The appointee Mrs. Ghanney came third. This is contained in a report by the Interview Panel to the Council Chairman which we have intercepted. For Mr. Kojo Amuah Prah, we heard he was not given the position because of his age and for Dr. Hull Adams we heard some background checks. What background check. If for nothing at all these two people are already serving, have served for years and know the ins and outs of the College better. Are they not better-placed to handle the affairs of the College?” he questioned.

The Secretary to the Convocation said in their pursuit for the case to be settled amicably, they petitioned all relevant bodies including the Governing Council based on which an emergency Council meeting was held where staff of the College unanimously voted against the appointment of Mrs. Ghanney.

“We first petitioned the Governing Council upon which we sent copies to the Ghana Catholic Bishops’ Conference, Ghana Tertiary Education Commission, the Apostolic Administrator of the Sekondi-Takoradi Diocese of the Catholic Church and the Western Region Minister. The Governing Council subsequently had an Emergency Meeting with the Academic Staff… amidst threats and intimidation from some Council members, the staff unanimously voted to show their total rejection of the appointee.”

Even though the Academic Staff acknowledges the powers of the Council, Mr. Ewusi-Mensah insists that as major stakeholders, they cannot work under an unqualified person in a College that has PhD holders and PhD candidates as tutors.

“Some of our colleagues have left us because they do not qualify to teach here. So why should it be the case that an unqualified person be made to head us? It is academically wrong and so our total rejection.”

The Academic Staff, therefore, called on the Vice Chancellor of the University of Cape Coast, the Director General of the Ghana Tertiary Education Commission, the Minister of Education and other relevant stakeholders to as a matter of urgency revoke the appointment with immediate effect.

“We also ask for an immediate audit of the academic qualifications and credentials of the appointee to ascertain the veracity of her qualification based on which the Council offered her the appointment.”

At the time of the press conference, lectures were ongoing without any interruption.

But Mr. Ewusi-Mensah said the Academic Staff will not hesitate to withdraw their services should the Council fail to act on their demand.