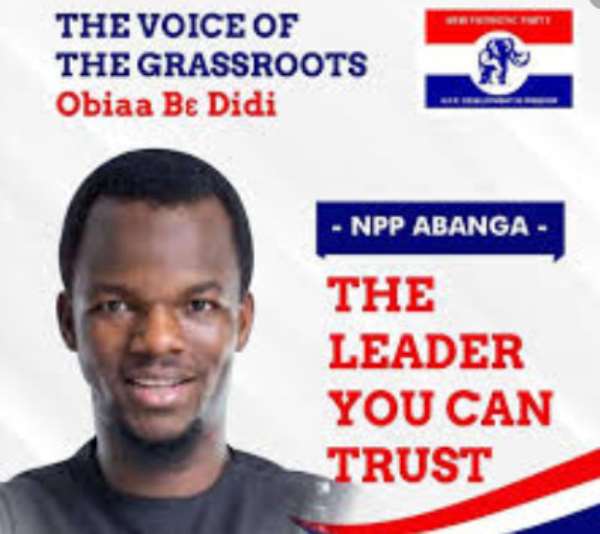 The euphoria towards the election of the next National Executives of the New Patriotic Party has just started. Many Patriots are pitching camps and many names are coming up especially in the National Youth Organizer race.

Presently, the name on the lips of many party activists is Mr. Fuseini Yakubu Abanga popularly known as NPP ABANGA. The young, energetic, strategic, serene, and linguistically-lively Abanga comes to the Youth Organizer race with vast experience in grassroots mobilization.

On a close watch of events, we decided to zoom into his profile.

Abanga began his education at the Boinsu King of Kings Preparatory and Junior High School. With the understanding that education is the only vehicle to improve himself and change the circumstances of his family and community, he proceeded to the Okomfo Anokye Senior High School in Wiamoase in the Ashanti Region. In 2014, Abanga gained admission to read Political Science and Archaeology at the University of Ghana – a place where he learnt for a degree but also carved his niche in politics and people. He also proceeded to the Ghana Institute of Management and Public Administration (GIMPA) to acquire Certificate in Administration and Management, Law and Governance and Petroleum Oil and Gas.

Abanga was a Representative of Jubilee Hall on the University campus. While in Level 100, he contested for the position of Tescon Organiser and won. Similarly, in 2015, Abanga contested the position of Tescon President, but his candidature suffered a setback. In the process of resolving that setback, he met with the then NPP National Organiser, John Boadu, who took him under his wings – training him to become the mobiliser he is today. Due to his commitment to the party and activism for the NPP on campus, he earned the name NPP Abanga – a name that would follow him to this day.

As a passionate student of the political history of Ghana, Abanga learnt about the struggle of the UGCC to achieve independence for the Gold Coast. He learnt about the activities of the ‘Big Six’ and the progress Ghana chalked under Dr. Kofi Abrefa Busia. He read about the courage and efforts of personalities in the Danquah-Busia-Dombo tradition during the military regime of the late Jerry John Rawlings for the democratization process and the rule of law in Ghana. Abanga believed that the NPP is the “birther of freedom” and the best platform to achieve development. As someone who believes in democracy, development and prosperity for the broad masses of the Ghanaian people, he identified the NPP as best placed to lift people and communities out of poverty and shape their future.

At the student level, Abanga was an effective organizer. The youth leadership under Sammi Awuku would come to rely on Abanga to mobilise students for the party’s fieldwork and for demonstrations.

Abanga marshalled students for the popular, crowd-pulling demonstration dubbed “The Dumsor Vigil” to decry the incessant power cuts under the John Mahama government. He also effectively mobilized for the LET MY VOTE COUNT (LMVC) demonstrations against the bloated register prior to the 2016 elections which eventually brought President Akufo-Addo to power.

Abanga also mobilized students and residents in Greater Accra for the famous “Won Gbo” (we are dying) demonstration to called to bring attention to the high cost of living and the penchant for the John Mahama government to excessively tax the already burdened citizens.

In the year 2019, NPP Abanga was added to the Western North Monitoring and Mobilization Team for the Referendum which gave birth to the regional demarcations. In the same year, Mr Fuseini Yakubu Abanga (NPP ABANGA) contested as a Parliamentary Aspirant for NPP (Aowin Constituency) and lost by a slim margin.

It is for the reasons above that he has been committed to the NPP. It is because of this belief that since 2014, at the start of his tertiary education, he has committed himself to grassroots mobilization and youth development. As someone from a humble background, he acknowledges that access to free education, free healthcare, agricultural policies, infrastructural development and investment in human security needs to be deepened and widened for everyone Ghanaian.

In an interview, Mr. Kwasi Kwarteng (National Communication team member), asserted that “NPP Abanga believes in the devolution of power and influence to the base of the party. He understands that the grassroots and young people are the nerve of the party and they need a leader who would tap into their potential.

He acknowledges that opportunities should be shared and people should be supported to achieve their potential – to benefit the party too. He believes in training and allocating resources to party workers so that they can provide effective lifelong services. Ultimately, he believes that by mobilizing all the various sectors of the Ghanaian society, the NPP can break the two-term cycle of the Ghanaian political System”.

The slogan Obia B3 Didi (Everyone will have a share) is a reflection of the man Abanga: caring, compassionate, considerate and collective-spirited. He holds the strong conviction that scholarships, business opportunities, public sector employment, travelling opportunities, welfare grants, should trickle down to the last person. He understands there is joy in sharing; peace is an end product of the equal treatment. He believes we rise together when we share.

Abanga believes in hard work and it is a trait that leading members of the NPP – Sammi Awuku, Dr. Dominic Eduah, Nana B – can attest to. He loves to work on the field, breaking new grounds and travelling to the hinterlands to organize for the party.

Abanga energises the youth base. His multilingual abilities and appreciation of the social, cultural and political demography of Ghana are his exceedingly delightful gifts for party mobilization.

The story of Mr Yakubu Fuseini is a true representation of the adage that says "A man is revered according to the magnitude he serves his fellow men."