Why could Rawlings not speak fluent Ewe? 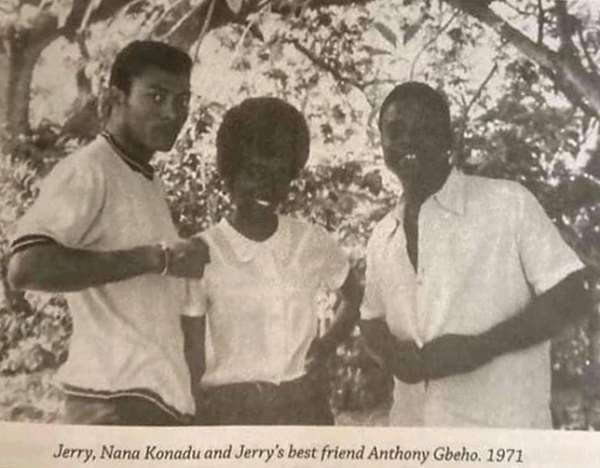 He did not write any books about himself. He did not have any authorised biography either. And not much has been written about his early life. Those who were not close to him or know someone who grew up with him, have little, or no, knowledge about the circumstances of his growing up.

What were the experiences of his youth that shaped him to become what he was?

I have always wondered why Rawlings, who lived all his life in Ghana, spoke the way he did. We know his Eυe was not good. That is easily explained. He did not grow up in Dzelukoʄe where he walked the hot sandy beaches to the mission primary school speaking Aŋlɔ̃ with his mates. We cannot expect him to speak it with the fluency of a native speaker.

He was not alone in this. Tsatsu Tsikata’s Ewe is poor too even though he was born in Keta but did not grow up there. It says Tsatsu attended the same preparatory school in Accra as Rawlings - Mrs Sam’s Preparatory School. Those who went to secondary school in the VR remember the Eυe children from Accra sent to the region to improve their language and get to know the culture better. Many became better at the language, but you could still tell…

Rawlings grew up in an Accra at a time Gã, and not Twi, was the dominant language of the capital. Did he speak Gã like a native? I do not know.

It is his “special” non-Ghanaian English accent that is more difficult to explain. Why did he speak English the way he did when he never lived outside the country of his birth? Did he attend special primary schools before going to Achimota which was full of dadamma?

When we were in secondary school, we had a tendency of adopting some affected English accent. It made us “guys”.Many of us grew out of this mode when we left secondary school. It seems Rawlings never did. He kept on to it and it became part of him.

When he became a national figure, it may have been too late for him to change and start speaking like the rest of us. Ghanaians never held this against him. Oh no! We even thought it was cool especially when we proudly compared his speech with the heavily accented English of Obasanjo, Buhari or even Museveni. Rawlings pronounced his English words distinctly. But not like a Ghanaian!

A consideration of aspects of Rawlings’ life leads me to a comparison of him with another man with mixed parentage and who also was head of state: Barack Obama.

Unlike Rawlings, Obama was conscious from his childhood of where he stood on the racial scale in the US. He was black. He did not have to feign an accent. He talked like the rest. On the campaign trail, he was faced with the issue of his not being “quite black enough”. He freely discusses this in his earlier books and the new biography.

In the US, race relations are an old problem. This enabled Obama to quickly know where he stood. We don’t have that kind of race problem in Ghana. Rawlings could be whatever he wanted to be and no one would look down on him because of the colour of his skin. While Obama may be derogatorily called “nigger” in his backyard, some Ewes fondly and affectionately called Rawlings “Yevuvia”. But this lack of readymade structures to fall into could pose difficulties for a young Rawlings. How did he resolve such problems, if there were any?

Another point of comparison is their relationship with their fathers. Obama, too, did not have his biological father in his life. Obama, senior, visited them for a month in Indonesia when he was young. He got letters from him (on those email cards with no enclosures) until his early death and maintained the relationship with his African family. In his new memoir, Obama says his daddy’s absence did more to shape his life than the brief one month he had with him in Indonesia. We don’t know what the absence of Rawlings’ father did to him.

Even though they were of different generations, both became heads of state at relatively young ages in their lives. It took only four years out of power for Obama to come out with a voluminous first part of his memoirs. Rawlings was still working on his book 20 years out of power.

Obama lived in a different environment. His mother may have read books to him as she put him to bed. And, even as president, Obama found time to read to his daughters until Sasha said she was too old to be read to! Obama wrote in his native language. He had already written two books before his presidency.

Rawlings was really not a cerebral man. He was a practical man and a good orator but not someone who would quote Tacitus or Thucydides in his speeches. Writing a memoir would not be what came most easily to him.

We are not a people who read much. Ahwoi’s book on Rawlings was widely discussed in the media but how many Ghanaians actually read it? The reading situation is gradually improving in the country with the increasing numbers of university educated Ghanaians. The middle class is expanding, even if glacially. But memoirs will not sell like hot cakes in Ghana and make the writers rich.

US presidents have an eye on their memoirs when they are in power and they prepare for it from day one. And there have been some good presidential memoirs. The situation is different in Ghana.

Barack and Michelle are said to have received a packaged deal of $65 million for each of their memoirs. Obama was to write only one book. But he has so much to say that the first part is a tome of more than 700 pages that has become a best seller. He is working on the second part. Which publisher in Ghana would give a fraction of that money for Rawlings’ memoirs? Obama doesn’t have to worry about government not paying him his end of service benefits in time.

Given the controversies surrounding his leadership, how much can we trust a Rawlings autobiography? In the matter of his youth, he would not have much to hide and we can take his word for it. It is the account of his life in politics that will be contentious. He was an immensely popular man. But he had his detractors too. And these are not few.

The best stories of a man’s life are the ones where the subject gives unfettered access to the biographer and does not interfere in the writing process. It is unlikely Rawlings would give such access to a biographer (authorised or otherwise). The true story of the life of the man who transfixed Ghanaians for the past 40 years, whether in or out of power, may remain untold. But I am eagerly waiting for his book…