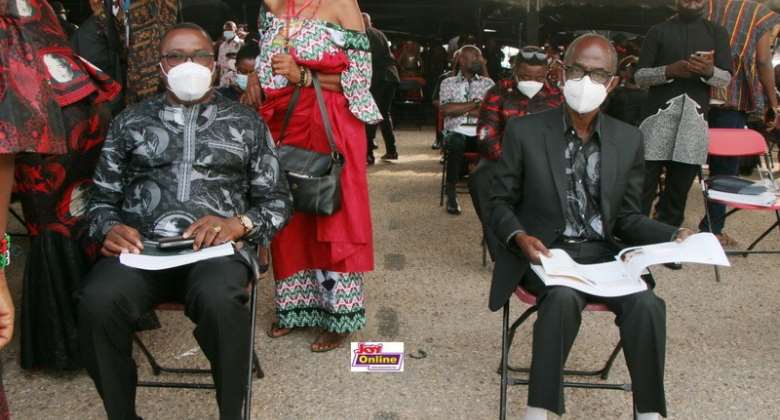 NDC has been very visible in the country recently all in the name of protestation. And at the final day of Papa J’s state funeral their continuous nauseating chants nearly marred a rather colorful event. The officiating priest had to warn them to stop otherwise, he calls in the military to bring sanity. Wasn’t it supposed to be a solemn event and last respect for their founder? Why did they trade Papa J’s last respect with settling scores with their political opponent? Your guess is as good as mine.

The government of Ghana and the Rawlings’ family delivered a very well-coordinated and organized 4-day funeral that ended on January 27, 2021. The body was laid in state at the Accra International Conference Center for the first three days. Ordinary Ghanaians and dignitaries including former presidents and the president Nana Addo Danquah Akufo-Addo went to pay their last respect. Covid-19 protocols were excellently observed, and time management was executed perfectly to the admiration of the Ghanaian public. The final rites of passage were climaxed by a divine burial service at the Independence square also known as Black Star Square. All attendants comported themselves for the respect of the departed soul of former president Jerry John Rawlings.

As soon as president Akufo-Addo took his turn to give the last tribute, the supporters of the opposition National Democratic Congress (NDC) started chanting the name of their 2020 presidential candidate, former president John Dramani Mahama (JM). They suggested in their chant that nobody could stop the second coming of JM. In so doing, they departed from their nicely distanced seats, got close to each other, disrespected the covid-19 protocols and disturbed the solemn environment other attendants were enjoying. The chant went on for the entire period the president gave his tribute to the surprise of everyone present. They equally repeated the noise when former president Mahama was introduced and when their party leaders were called to perform a function. NDC sacrificed the last respect for their founder, the first president of the fourth republic and a legend for a political expediency of one man, John Dramani Mahama.

As their ugly noise became unbearable, the officiating minister warned of calling the military if it did not stop. Had the military forcibly removed them from the funeral grounds, the beauty of the event would have been destroyed. The national and the international media would have reported it and discussed the military intervention instead of Rawlings’ beautifully and well-coordinated send-off. Perhaps, that might have made the NDC happy. The NDC believably has an agenda to always set the stage for chaos and make political profit out of it. A clear characteristics of nation wreckers.

NPP-Finland finds this act distasteful and a national shame that should be condemned by all. Never again should such unpatriotic behavior be exhibited at national events and the media cannot keep quiet on it. The NDC had stolen our peaceful Christmas season with their continuous post-election violence. They had burnt mountains of tires on our streets and in our neighborhoods. They blocked traffic and caused so much congestion at the time we needed it most. The former president Mahama and the NDC 2020 presidential candidate is currently litigating the election results at the Supreme Court of Ghana. And yet they still chose the last day Ghana paid farewell to its longest serving head of state to settle political scores. What a disrespect to a departed soul of your founder.

God bless our homeland Ghana and make her great and strong!

God bless the NPP for the development in freedom agenda!!