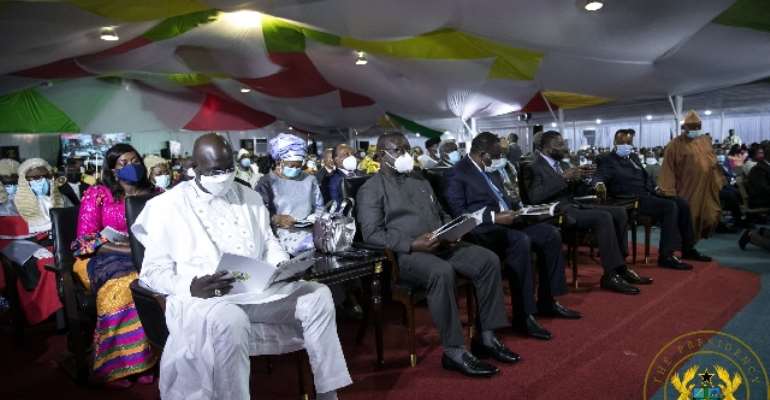 The presence of world leaders at the investiture of President Nana Akufo-Addo is an endorsement of the legitimacy of his victory in the 7 December 2020 general elections, political science lecturer Dr Richard Amoako Baah has said.

“That’s what it portrays because no president of another country would endorse disputed elections by showing up at the inauguration of the winner of that election”, Dr Amoako Baah told Kwame Appiah Kubi on Accra100.5FM’s morning show Ghana Yensom on Friday, 8 January 2021.

Some of the foreign dignitaries who graced the inauguration on Thursday, 7 January 2021, include Presidents Denis Sassou Nguesso of Congo; Faure Essozimna Gnassingbé Eyadéma of Togo; Alassane Dramane Ouattara of the Ivory Coast; and Roch Marc Christian Kaboré of Burkina Faso.

Also present were Madam Teresa Efua Asangono, Senate President, Equatorial Guinea; Dr Mohamed Ibn Chambas, the Special Representative of the Secretary-General and Head of the United Nations Office for West Africa and the Sahel (UNOWAS); and Mr Geoffrey Onyeama, the Minister of Foreign Affairs of Nigeria.

In Dr Amoako Baah’s view, all the nations whose presidents and representatives came for Akufo-Addo’s swearing-in ceremony, have embassies in Ghana who followed the elections, so, had the outcome been “patently” stolen, their ambassadors and high commissioners would have conveyed that to them.

Dr Amoako Baah said despite the few skirmishes in some parts of the country during the elections, “it is clear that Nana Akufo-Addo won”.

Mr Mahama and the NDC are, however, contesting the results.

They have described it as a “fictionalised” and “stolen” verdict.

The party has held several demonstrations across the country to drum home its claim that the election was flawed and skewed in favour of President Akufo-Addo and the NPP.

Some of the demonstrations have been violent.

Mr Mahama has filed a petition at the Supreme Court to challenge the results.