The December 7th polls must be held peacefully 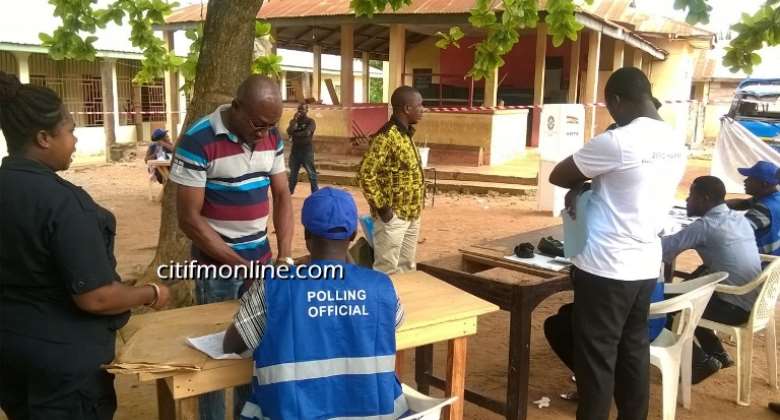 It is believed that the process of voting would not be changed. Voting would take place in the open in all polling stations after which counting would be done openly after close of polls in the presence of party agents and international and local observers.

All party agents must take their roles of watching the votes seriously because elections are won and lost from results at the polling stations. Before the polling day the EC is expected to consider all concerns expressed by political parties on the processes leading to the polls.

It is expected that after the close of polls certified results would be sent to constituency coalition centers with the presidential results also sent to the national center where the results would be collated and declared. During the processes of pollng securitymen and women are expected to be deployed to play their roles of ensuring peace and security at the polling stations and all the coalition centers.

The IGP has given assurance that his men and women would be up to the task. We would hold him to his words believing that all will be well with us. To follow the rules of covid-19 the EC will peovide hand washing facilities and sanitizers for all voters at all the polling booths but all voters would be required to wear nose masks. Meanwhile all the political parties are Crisscrossing the entire nation campaigning for support with accompanying risks of accidents due to the way they are moving up and down. Since we need all those involved alive, the drivers must improve on their driving skills.

The leading campaign messages are Free SHS with the NDC saying that they introduced it in 2015 while the NPP say they introduced Free SHS in its current form making it popular Nationwide. Almost all the political parties say they would provide good policies such as good and additional housing facilities, good roads and job openings.

Most of the parties especially National Democratic Congress intend to promote industrialization good healthcare at no cost in primary health centers and give support to businessmen and traders. The NDC is proud of introducing a lady Dr Jane Naana Opoku Agyeman as Vice Presidential candidate hoping to attract supporters for her and her party.

\The NPP on its part believes that its Vice President Dr Mahamud Bawumia and running mate is good at promoting good economic measures meant to continue improving the economy especially through digital and paperless processes in financial transactions.

The entire nation has been observing and listening to the presidential and parliamentary candidates to be able to make their choices on the polling day. As they go about campaigning it is expected that all the candidates would not dwell on issues with unsubstantiated allegations as that can lead to unnecessary arguments and conflicts.

The candidates and their political parties are not involved in their activities alone. The national Commission on Civic Education is engaged in educating the electorates on the election processes advising voters to conduct themselves well before, during and after the polls. Religious bodies including Muslims and Christians are as usual organising peace meetings to advise members of their flocks and the public to remain peaceful and not to allow themselves to fall pray to violent activities.

The National Media Commission and Ghana Journalist Association are busily advising journalists to report fairly especially on the certified results on the polls in December. Our Traditional Rulers are up to the task of advising political parties to choose peace over conflicts during their campaigns.

With this in view, we require the processes of the polls to move smoothly. All party faithful especially youths must not allow themselves to be used to get involved in vigilantism to engage in violence before and after polls. Ghana is touted as one of the most peaceful nations of the world. We have remained peaceful especially during and after polls.

When former President Rawlings died recently all the political parties exhibited peaceful acts and oness by halting their campaigns to mourn the death of the first President of the 4th Republic who worked tirelessly for peace and honesty and tranquility in Ghana. This is an example of how we can be peaceful at all times. It is our belief that we'll remain peaceful after the December polls. Eleven political parties and an independent candidate are out to take part in the presidential polls.

Two of them seem to be front runners to win the polls. They are former president John MAHAMA of NDC and Nana Addo Danquah Akufo-Addo of NPP who have all got one term as presidents in the Fourth Republic . At the end of it all only one candidate would be declared a winner. When the winner is declared the losing candidates are expected to concede defeat and congratulate the winner.

However, they have the right to call for redress in disagreement. That would keep the nation intact and peaceful. The winner must proceed to work towards uniting the nation by involving all qualified persons in national affairs. With this the nation would continue to enjoy its enviable position as one on of the most peaceful nations of the world. When that happens we shall give thanks to Allah, God Almighty for his mercies on us. We give thanks to God that we shall remain peaceful because whatever our ethnic groups, political parties or positions in Ghana, we are one people in one nation with a common destiny. Thanks be to God for keeping us together.

By Alhaji Alhasan Abdulai, a journalist

[Audio] 'Because of Mr Akudugu you want to destroy me, It wo...
41 minutes ago