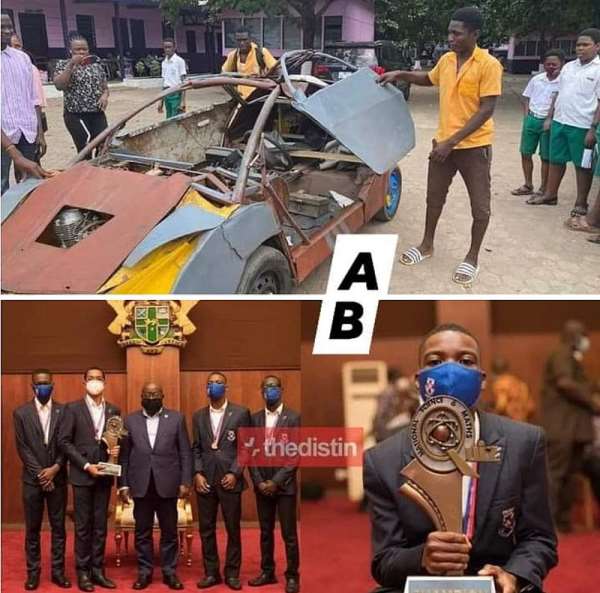 If I tell you that I have any much respect for people going to school and graduating with degrees without producing anything tangible, I'm lying to you. That's why further studies is never one of the top things on my mind, but further learning.

Kelvin Odartey, a final year Junior High School student who sat for the 2020 Basic Education Certificate Examination (BECE) made a car from gathering scraps. His invention went viral online where many social media users including myself applauded him for his talent and wished that the government would support him to realise his dreams of producing cars, as engineering is his passion.

But the winners of the just-ended National Science and Maths Quiz were given so much attention and made to meet President Nana Akufo Addo for showing their brilliance or winning the trophy in the competition for their school, but no government official has called or paid attention to Kelvin Odartey the inventor of the car.

Now between these two, who do you think sincerely needed to meet the President? The inventor of the car or the winners of the National Science and Maths Quiz?

We lose many of such raw talents every time in this country because our leaders do not recognise them. Either their talent is completely wasted or we lose them to developed countries where such gifts are highly recognised and encouraged by their leaders.

As a people, we cherish certificates or useless knowledge more than natural genius. I'm not even inspired by 8As or First Class because it is almost useless scoring such here. Just a few of such geniuses here do something tangible with it, apart from sitting in one office feeling big for nothing, after their university education.

Africans just need to elevate themselves more in thinking. We're far behind and something urgently needs to be done about this kind of education system that feeds us with useless knowledge and promotes “chew and pour..” where we only learn to memorise things and reproduce them when needed but do not learn to think on our own.

Our medical doctors only know how to prescribe medicine and take body temperature. They cannot even create vaccines because they were taught to remember things, but not to think and produce them.

What about our engineers? They cannot even fix their own cars when they are broken down, they have to give their car to a roadside mechanic who never even stepped a foot in the classroom to fix or repair for them. So you see, we do not value practicals, we only value theory and it is one of the causes of our bane on the continent.

It is easy to remember things, what is hard to do, is to think. As Albert Einstein once said, “Education is not the learning of facts, but the training of the mind to think.” What we need to start doing as Africans is to start thinking. We must structure our education system in a way that it will force us to think and come out with inventions like the Europeans, Americans and Asians are doing.

We must encourage technical and vocational education. We must cherish creativity and do away with too much learning of theory that doesn't benefit anybody, except knowing how to speak good English on our TV and radio stations abusing ourselves in the name of partisan politics.

The government should look for Master Kelvin Odartey and people like him who are full of potentials and give them all the necessary support they need to put our country on the map. It is okay to recognise winners of the National Science and Maths Quiz, but those who can invent things like cars and other machines should be recognised first because the world has moved past just memorising facts and reproducing them when needed.

We need more creators, producers, inventors, innovators and many of such practical people to make the world an easier place for us all to live in.

Ghana running into unsustainable debt levels topping 80% of ...
45 minutes ago