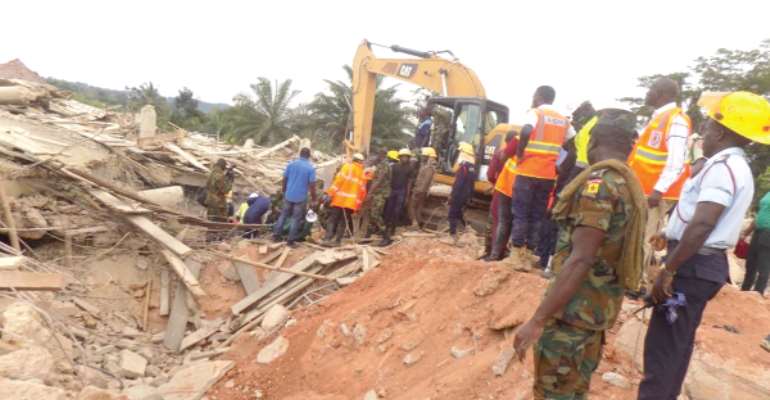 History has recorded that during the Babylonian era, the collapse of buildings attracted severe punishment, including execution of craftsmen. This showed how the early Babylonian kingdom attached great importance to preventing buildings from collapsing.

There is recorded history in the era of Egyptian civilization that craftsmen were also executed or sanctioned during the building of pyramids. This curbed the practice of craftsmen using substandard materials and engineering practices that fall short of the Egyptian standard.

Per the statistics from NADMO, approximately 85% of all new buildings in Ghana have been constructed in these two major cities and because they are the two major commercial hubs of Ghana.

MMDAs dish out permits like candies to school girls. Many buildings reach roofing stage before assemblies who have jurisdiction over the geographical area become aware. Assemblies who have bylaws to stop some of these buildings have been corrupted, reducing to toothless watchdogs that only looks but can’t attack or bite.

The statistics table attached to this article gives an indication of the severity of the problem in Ghana. The frequent building collapses in Ghana is worrying and steps must be taken to curb this menace.

The Ghana Standards Authority should intensify its oversight responsibility in the area of building materials. An effective supervisory and inspectorate system will lead to the arrest of these products and persons behind the production or importation of these products.

Any building that collapse at a particular area has a metropolitan, municipal or district assembly located in that jurisdiction. Authorities in charge of these assemblies should be prosecuted together with the owners of these buildings. Until the state acts and bites, the impunity will grow and enlarge.

Furthermore, the state should retool state agencies charged with responsibility in the building industry. Provision of GPS, digital cameras, laptop computers, and PPE for building inspectors and assemblies. This will help them to do more in effective and efficient implementation building regulations, facilitate the process of development control, and enhance the monitoring role.

In all this, without strict adherence and enforcement of laws governing the building industry, we will give witnessing buildings, built to break lives.