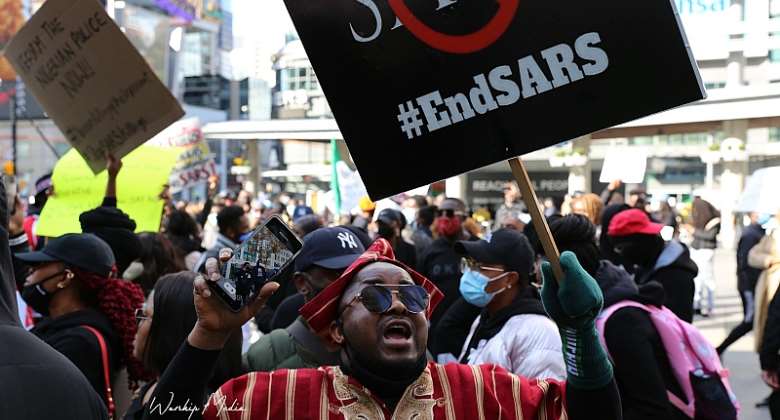 In Nigeria, issues often take an ethnoreligious dimension and that appears to be the case with the aftermath of the End SARS protest. In many parts of the country, the crisis has degenerated into religious conflicts. The End SARS protest had largely been peaceful, civil, and well organized until state-sponsored thugs started attacking and burning the cars of the protesters. Then the government sent the soldiers who shot and killed some of the protesters at Lekki tollgate in Lagos. Since the bloody Tuesday night, there has been reported clashes and arson across the country. There have been reports of looting of stores and warehouses. Several police posts have been burnt down. There have been reports of the killing of police officers and soldiers in Lagos, Abuja, Owerri, Ibadan, and other cities across the country. The conflict has taken a religious dimension in Kano turning believers against non-believers.

The attached tweet reveals how religious labels are being used to mobilize resources against real and imagined enemies. Look, SARS and police brutality were no longer the targets but infidels. The post-End SARS crisis has offered an opportunity to launch a jihad, a battle against infidels in southern Nigeria. In this tweet, a Hausa/Fulani Muslim describes their opponents as ‘rotten infidels’. Rotten infidels? As he acknowledged, the post-End SARS protest crisis has provided an opportunity to correct a misconception. They want to make it clear that their silence was not out of weakness. This tweet aligns with the message of the president who sent soldiers that shot the protesters at Lekki to show that the prescription of SARS was not a sign of weakness. If not properly handled, this crisis would likely worsen and reveal Nigeria’s fault lines. The crisis will degenerate into sectarian attacks and bloodletting especially in places where Northern Muslims and Southern Christians live side by side, such as Lagos, Abuja, and Kano.

By designating their targets as ‘rotten infidels’, the person who tweeted the attached message was mobilizing Muslims in the area and beyond against non-Muslims. He presented them as enemies of Islam so that other Muslims would support the attacks and killings. Let us not forget, the End SARS protest has been about tackling police brutality and impunity, not about religion, or about fighting and killing ‘infidels’ in the north or in the south. Shafiu Salis qualified the infidels as 'rotten’, so that Muslims would see the designated persons as a form of filth and waste that should be disposed of.

Later in the tweet, he made it clear that the 'cleansing' had started and would continue until the area is “completely cleansed” of these “Kaffirs”(disbelievers). The government in Rivers should look into what is going on in Oyibo and the environs and the extent of the cleansing of "rotten infidels" as acknowledged in this tweet. Nigerian government should find out if police officers and soldiers in the hotspot areas are cleansing 'infidels' in the name of maintaining law and order.

There could be other forms of religious cleansing of Kaffirs silently going on in other places across the country. Nigerians should refrain from using the post End SARS crisis as an opportunity to embark on ethnoreligious vendetta or to settle ethnoreligious scores. End SARS is a campaign against police brutality and impunity, not an occasion to turn against other Nigerians, or to attack and kill and cleanse Kaffirs in the country.

State properties can be taken off wills — Lawyer Justice Abd...
1 hour ago