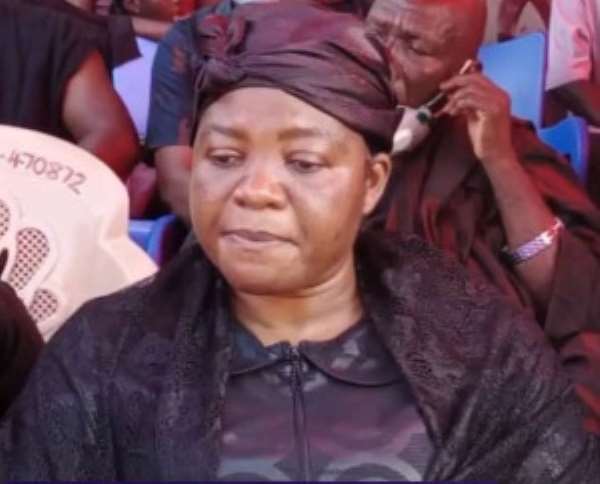 “She thus joins the escalating list of political widows roaring to take over their husband’s parliamentary seat even before the internment of their husbands, when the tears are still fresh on their cheeks! I don’t know whether to call it gallantry, cowardice or plain betrayal!”

Inappropriate, that’s what it is ─ this growing practice of replacing dead Members of Parliament with their grieving widows for purely political advantage! The latest victim of this cold-bloodedness is the widow of the slain Mfantseman MP, who has reportedly filed her nomination to contest her late husband’s seat!

She thus joins the escalating list of political widows roaring to take over their husband’s parliamentary seats even before the interment of their husbands, when the tears are still fresh on their cheeks! I don’t know whether to call it gallantry, cowardice or plain betrayal!

The audience in Shakespeare’s Hamlet watched with dismay the nauseating spectacle of Queen Gertrude getting married to Claudius, the killer of her husband less than two months after his death! To the audience, Gertrude’s marriage is nothing but selfish betrayal of her good husband, who she rewards with her unfaithful heart.

But can anyone really blame the poor widows for replacing their husbands as MPs and helping to preserve the seat for the party? And what is wrong with eking out a decent living by dint of hard work instead of becoming a helpless dependent of a political party?

This is a smart world now, and these women are smart political widows who must take advantage of sympathy votes and communal goodwill to live the dream of their men! Consequently, as sad as the passing away of the original MP is, the nomination and subsequent election of the political widow is God’s own way of wiping the tears away, turning grief into joy, and hopelessness into vision, communal service and achievement!

Since the desire and appetite of political widows to replace their men in Parliament is now a trendy phenomenon, almost sure to gain party endorsement because of sympathy votes, I wonder whether this development strengthens our parliamentary democracy or takes away from it.

First of all, the political widow does not need to go through vetting. She jumps the political queue sympathetically on the ticket of the blood of her husband. Party members and constituency officials who dream of contesting the seat as a result of the MP’s demise are body-checked in their tracks. The widow is first. This is certainly a major blot, inconsistent with participatory democracy.

The untried and untested political widows may not necessarily have the symmetry for success, effectiveness, or efficiency as the original MP. She may not even be a political activist! Much time, training, effort, and exposure is thus required to “cook her” and elevate her spirit in legislative matters and procedure.

The process of parliamentary participation for political widows is fraught with favoritism and a relaxation of the rules in a manner that a widower can never aspire to. Such inequalities do not promote confidence in a democracy.

Political parties would need to clarify their positions on political widows. If it is a policy to promote female participation in governance at the level of the constituency, this ought to be clear and the modalities clarified to apply to all would-be widows equally, rather than vesting the privilege on the whims and caprices of party executives.

And may God help us, so the policy (if indeed it is a policy) does not become the exclusive cause of the multiplication of deaths of our menfolk for the exclusive gain of scheming widows!