The Stolen Legacy Of Trained Teachers; The Untold Story Of Legacy Arrears 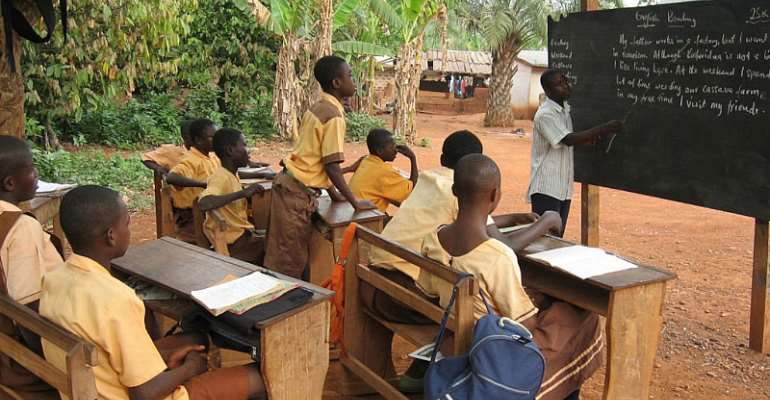 Growing up, I witnessed a profession that was praised yet surrounded by countless industrial actions to demand one thing; better conditions of service for the teacher. It was always one strike action after another with the same common issue of improving the welfare of the teacher. At that infant stage, some of us could not appreciate what the teacher went through before he could afford a bicycle to commute to school every morning. It was not until I joined the “celebrated” noble profession before I understood the injustices that our old hand teachers suffered before they retired without any material legacy after helping to build the legacy of our nation’s future.

The experienced ones in the profession repeatedly said to us that to be comfortable in the teaching profession depended on how well a young newly employed teacher is able to make economic use of the accumulated salary often taken as back pay. The phenomenon “back Pay” found its widespread use in our labour lexicon to mean accumulated wages or salaries paid to a newly employed worker after several months of working without any economic reward. In Ghana and especially the Ghana education service, back pay could mean payments of salary arrears owe the worker from a period spanning from twelve to thirty six months. Astonish as it may be of having to wait for a period of two or three years of active service delivery before getting “back” paid, it is perfidious shenanigan for such a rightfully due salary of an employee to be christened “legacy arrears” because it is in default for about seven years. The measly monthly accumulated income to reward the poor teacher of his or invaluable services to the nation has now become a cenotaph called “legacy arrears” celebrated to remind the teacher of pain and his worthlessness.

What is this monstrous thing called legacy arrears

In November, 2013 the then minister of finance, Mr. Seth Terkper wrote an edict with the caption; “backdating of appointments, promotions and reactivation dates” for circulation. In the said edict, he noted with grave concerns about the issue of backdating documents in the payroll system which was distressing the national budget. He consequently directed a new pay policy which became known as the three months pay policy. With the new pay policy, the government was to pay three months of any form of salary arrears owe any civil service employee irrespective of the number of months the employee may have worked for. The worker was to subsequently justify the payments of the forfeited months through regularisation of documents to proof his or her appointment date.

By this directive, if a teacher was employed in a year or two ago without any monthly salary for that period, he or she was to be paid only three months if he or she was to be paid at all after the long years of waiting, borrowing and “starving”. The forfeited months were to be justified before payments could be effected. In the said edict written by Mr. Terkper, the reasons assigned for the directive was to check for backdating of teachers' appointment and promotions which used to be a common practice in the Ghana education service. From the face of it, that was a smart move by the ministry of finance at the time to check the canker of backdating appointments and promotions which became a drain to the nation's treasury. However, someone, perhaps, our teacher unions or the Ghana education service should have drawn the finance ministry's attention to the fact that trained teachers from the government colleges of education couldn't have been part of such directive because there can NEVER be anything like backdating of train teacher's appointment.

For a trained teacher to be formally integrated into the government payroll, he or she must have a registered number which is a proof of a successful pass in all exams written at the college of education. The registered number is an eight digit code with the last four digits bearing the year of completion from college. So if my registered number were to be 44252013, then it meant that I completed college of education and passed all my required exam in 2013. With this unique code, any attempt to backdate a trained teacher's appointment will not be successful since such appointment date will not congruent with the registered number on the certificate. This important information was overlooked and trained teachers were botched into the three months pay directive. After seven years of persistent frustration and despair, some of us are yet to receive our legacy arrears after going through every procedure needed to claim what is rightfully due us.

The hardship, frustration and regrets

Just ask any of the senior basic school teachers and they will tell you that back pay of the teacher is indeed a legacy pay. It has always provided a reasonable lump sum income for the poor teacher who is paid a paltry of salary to be able to start a satisfactory life. Back pay meant a legacy pay for the teacher. It bought the fridge, the television set and the living room sofas among others for the young teacher who began life in the teaching profession. In our case, we are been denied this teaching legacy and our back pay has rather become a legacy arrears fought for in the last seven years without any success yet.

It is heart breaking to mention that when we were asked on several occasions to submit documents to various education offices to facilitate payment, the processes rather turned out to be oppressive and frustrating. I can count without exaggeration, at least seven of such exercises in futility that we have gone through in the last seven years just to have our monies we have worked for paid to us. I do not intend to bother readers with some of the unlawful monies we are sometimes requested to pay at the various education offices to have our documents sent through for processing. However, I chose to share one nasty experience we encountered in 2016 that eroded my love for this ''noble" profession.

In 2016, teachers from about nine districts in the then Brong-Ahafo region who suffered this pay policy were asked to converge at the bonokyenpem hall at Techiman for audit service verification and validation for payments to be effected. Over fifteen hundred teachers by my estimation massed up at the bonokyenpem hall to undergo the verification process. The needless chaotic scene on that day convinced some of us that we worth nothing as teachers to the nation we are serving. At a point, the police were deployed to the scene to maintain order and to coach teachers who conduct routine morning assembly session for students on how to form proper queues and to fall in line to avert trouble and embarrassment.

The politics of it

When the three teacher unions hit back on this legacy arrears issue with a strike action sometime around February this year, there were claims that close to 90% of the legacy arrears have been paid to teachers. I want to set some records straight here with my privilege position as a former student leader who got preview to some information on this matter. The previous government began payments of these arrears before they left office in 2016. When this current administration took over, they have also supervised a good number of payments in the last three and half years. However, there are still huge backlog yet to be cleared. The backlog is from new recruitments, promotions and reengagements.

Our growing fears now spur from the position of the current government uttered by the vice president, Dr. Mahamud Bawumia on peace FM that over 98% of the legacy arrears have been cleared. This pronouncement was followed by a subsequent circular written by the Director General of the GES confirming same and going ahead to put a nominal figure of the 2% teachers left to be paid at 2,558. Meanwhile I know of a platform created for teachers owe legacy arrears that has at least 3000 members. Just last week Thursday September 24, there has been a new circular from the Ghana Education Service calling for the details of teachers who are owed legacy arrears to visit the various education offices with their documents to be processed. Part of the letter read that “the management of GES as part of efforts to bring finality to legacy arrears owed has submitted data of 11,420 staff”. In the said letter, a new figure of 11,420 teachers are quoted as owed by the government. The circular went viral along with a supposed list of teachers who are owed. In that very list circulating, some of my colleagues are still complaining of their missing names. Even though I cannot vouch for the claims of my colleagues because there are evidence of dishonesty on the part of some teachers who are reimbursed yet claim to be owed. However, the fact still remains that 11,420 cannot be the only number of teachers owed from this legacy arrears mystery.

Moreover, the teacher unions, on the other hand, had always disagreed with the government's data and puts the total number of teachers owed the legacy arrears far higher than what the government claims. From a close assessment of both sides, I suspect one of these two scenarios is the case. Either there is a mischief somewhere to irregularise data for some obvious reasons or there is a data crash at the controller and accountant general's department. The latter is more plausible because of the recent migration of government employees on to a new payment platform that caused a change in staff identification number of some GES employees. In such an overhaul situation of a complex system such as a payroll database, data lost could be likely and tracing payment records may be difficult.

Should the suspicion of data lost be proven, there could be two primary available major documents that can proof the teacher's case if he or she is actually owed by the government as government continue to cast doubt on arrears demand. The first document is the monthly payslip which will show records of payments from the time appointment was given out to the teacher. The payslip will also help to track when the first three months of salary arrears were paid and whether there have been any subsequent payments or not for which the teacher is laying claim. The second document is the bank account statements which will also show detail of payment records from controller made to the teacher including all arrears payments. Parties involved in this oscillation of arrears dispute who should have called attention to these possibilities are keeping quiet and our monies are gradually being lost in the wide.

We the 2013, 2014, 2015 and 2016 batch of trained teachers who are still owed by the government with this three months pay policy are demotivated and living with hopelessness. The question we often ask ourselves is that will these monies ever be paid and if so, when. Are we going to receive the same amount of what would have been paid to us in say 2013 in this day of 2020? What about the exchange rate. If government can find money from our taxes to pay monies depositors of mismanaged banks supervised by private individuals why should it be so difficult to raise money to pay statutory debt such as teachers’ salary arrears?