Welcome To Western Togoland: How Did HSGF Happen? 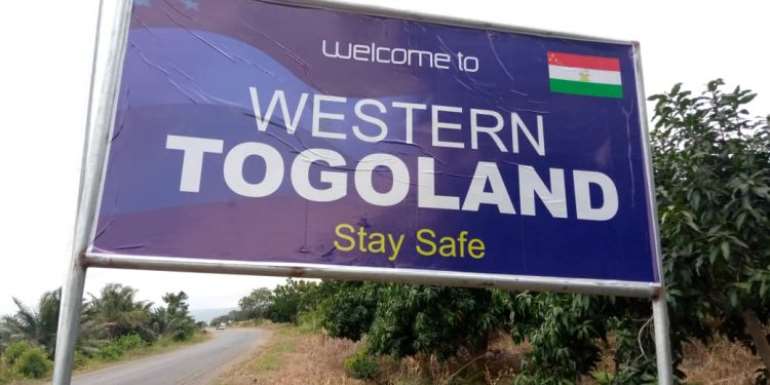 Ghanaians didn't go to sleep and woke up one dawn and saw this specter. However, we all seemed to have been taken aback, when this bug reared its ugly head---the second time in three years since 2017.

This is possibly so, because of the audacious manner the group carried itself last Friday-- rampaging police stations and allegedly seizing cache of arms, specifically AK47 rifles from the armoury.

Over the last ten years or so the group have demonstrated their avowed determination to declare this part of Ghana an independent state, where approximately four million people live. They've questioned the inequity (or the uneven distribution of wealth) in the system as the region hugely lags behind. in development. Indeed, that's an undeniable fact.

But that couldn't be used for an excuse to engage in lawlessness.

And this is why authorities in Ghana must look at the problem with extra pair of eyes.

Question is: Why now?
Because the Volta region appears to be seeing more developments under the NPP administration than it enjoyed in the previous NDC governments including the PNDC rule under President John Rawlings, who is a native?

Beyond that, several factors could account for this development. They include language, culture and religion which analysts believe might've triggered the insurrection. For instance, the Ewe language which is predominantly spoken in the Volta Region is also spoken in neighbouring Togo and Benin. And yet, there's another layer to the puzzle --which security analysts suggest must be looked into: And it has to do with funding.

Who's funding HSGF?
It's been alleged there's a diaspora link which is bankrolling the activities of the separatist group. Whether true or false I will urge the government of Ghana not to rest on its oars in doing anything possible to cut the head of this bug.

In the aftermath of the Friday brazen attacks, some members of the group alleged that Volta Regional Minister Dr Achibald Yao Letsa had once been the group's financier.

The minister had debunked the claim. And I won't buy into that warped theory either. I see it as a red-herring. But it also begs the question not to cast the drag net wider in the hope that we could catch the bad guys and deal with them ruthlessly.

The fateful day
On Friday 25, September, in a high- traffic at Juapong in the North Tongu District of the Volta Region, a huge Billboard screamed these four words: 'Welcome To Western Togoland'.

Really!
The group behind this audacious and lawlessness is called Homeland Study Group Foundation (HSGF) They'd declared Western Togoland an independent state in the heartland of Ghana. Early on they besieged a police station, where it was understood three police officers were held, hostage. And as though that wasn't enough the rogues took their wild and brazen act to another level--' blockading some routes and nearly seized the township, according to media reports.

"It could have been worse but for the timely intervention of the authorities there. We picked intelligence made sure their initial plan of widespread attack in the Volta Region was curtailed," said Dr.Letsa the regional minister.

Separatist groups elsewhere
Quite a number of them (Separatist groups) had once flexed their muscles across the continent of. Africa, which resulted the death of a million in Nigeria alone during the Biafra war,. And I think we have come a long way to allow some people with parochial interest to divide us and spread hate instead of love.

From neighbouring Mali to Zimbabwe separatist groups spread their tentacles. Here are a few of them: The AZAWAD( mainly the Tuaregs) in Mali, Mombasa Republic in Kenya, Casamance in Senegal (ethnic group Diola), Mthwakazi in Zimbabwe (ethnic group (Matabele), Biafra in Nigeria (ethnic groups- Igbos Anioma, Igede, Iredell,, Idioma, Ijaw, Kalahari, Ibibio, and Ogoni) to mention but a few. There are at least 30 separatist groups across the continent.

One reason why the government of Ghana must not treat this menace with kids' gloves.

"I think this group is getting out of hand. I served on the Commission of Inquiry for the creation of the new regions, and that was when I heard about this group. There’s a diaspora link which is financing the activities of this group. It’s about time voices in the affected region speak out. In full-blown confrontation, it’s going to costs but the real losers would the affected region," said a security analyst based in Accra.

History
The HSGF has been campaigning for more than 10 years for the Volta Region and parts of northern Ghana to break away to form a new country – the Western Togoland.

According to the group, the Volta Region does not fall within former Gold Coast borders, now modern-day Ghana. The group claim Western Togoland was an independent state before it was forced to join Ghana after the 1956 plebiscite. Thus per their demands, Volta and Oti regions, parts of Northern Region, North East region and Upper East Region will become part of a new Western Togoland state.

The territory of Western Togoland was first colonised by Germany in 1884 and incorporated into the Togoland colony. After Germany's defeat during the First World War, the colony of Togoland was divided between France and Britain as protectorates.

Western Togoland is a member of the Unrepresented Nations and Peoples Organisation (UNPO). Four million people live in the region. In terms of language and culture, Western Togoland, especially the Volta region, has more in common with Togo. Locals in the region say they feel underrepresented by Ghanaian authorities.

Calls for support to deal with the problem
Meanwhile, the President of the National House of Chiefs and the Agbogbomefia of the Asogli State, Togbe Afede XIV, has condemned the separatist group,

He said their action was 'unfounded' and further called on all Ghanaians to support the government to defeat and decapitate the bug.

“The allegations of road blockage and closures attempts at causing distractions to state property, kidnapping. These are the kind of things that I have not recollected ever happening in our country. The Honourable Minister of National Security talked to me this morning about it and then I also made the efforts to contact some chiefs from the Volta Region about a response from the Volta Regional House of Chiefs."

“It requires the support of all of us to ensure that this does not escalate any further. The standing committee will issue an apparent response after these meetings to the happenings in the Volta region which we disapprove of," he pointed out.

Togbe Afede continued: “This is not something that any of us must condone, it is something that we should all support the government to ensure that it is nipped in the bud so we can continue to live in peace as a nation.”

In his reaction, the Volta Regional Minister Dr Archibald Letsa told journalists that the dawn operation could have been worse but for the timely intervention of the authorities there.

“We picked intelligence and made sure their initial plan of widespread attack in the Volta Region was curtailed. They planned to attack major installations. I believe those were an afterthought when their original planned failed and so they went and blocked the roads,” Dr Letsa stated.

“You know, not long ago they erected billboards around the Asutuare area and we chased them and they had to move to other parts of the country which were soft spots,” he added.

Well, Mr Minister chasing them out won't solve the problem. Why? They'll retreat, regroup and return which is what we just witnessed on the Friday. Rather, disarm defeat and decapitate them.