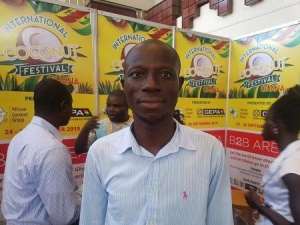 Agricultural Researcher and Vice-Chair of the Coconut Federation of Ghana, Kwaku Boateng, has expressed optimism over recent developments in the coconut industry in Ghana as more young people venture into the value chain.

Speaking in an interview with Globe Television, Mr. Boateng, said recent collaborations between government and industry players aimed at highlighting the economic potential of coconut has attracted thousands of young people to venture into coconut farming and processing.

He thanked the CEO of Ghana Export Promotion Authority (GEPA), Dr. Afua Asabea Asare and the government of Ghana for supporting the coconut industry through the Coconut Revitalisation Programme as well as the Planting for Export and Rural Development (PERD) Programme.

He said, over 100,000 coconut seedlings which have so far been distributed to 5,000 farmers under the PERD programme is proof of the government's commitment to supporting farmers to boost coconut cultivation and export.

In 2012, the sale of coconut water alone raked in approximately 350 million dollars in the United States of America.

Mr. Boateng stated that the economic viability of coconut cannot be overemphasised as coconut trees can live for up to 90 years while producing fruits.

He added that every part of the tree can be utilised for the manufacture of a variety of products.

"We have realised that many young people are beginning to venture into coconut production and export, which is a positive sign and an indication of how impactful our campaigns have been so far."

In 2019, GEPA, in collaboration with the African Coconut Group (ACG) organised the first-ever International Coconut Festival in Ghana, which brought together exhibitors as well as major players to promote coconut business.

The government of Ghana added coconut into the National Tree Crop Development Authority (NTCDA), which was established in 2019 and mandated to develop and regulate the production, processing, marketing and export of coconut and other selected tree crops.

According to data from the Food and Agriculture Organization Corporate Statistical Database for the year 2017, Ghana ranked 14th on the list of the world's top coconut producers with 383,960 metric tonnes produced in 2017 alone.