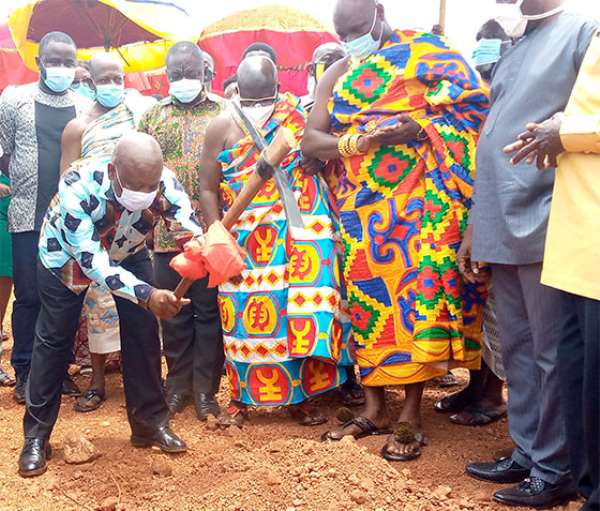 THE MINISTER for Health, Kwaku Agyeman-Manu, has broken the ground for the construction of a 40-bed hospital at Atwima Twedie in the Atwima Kwanwoma District of the Ashanti Region.

The Health Minister, who is also the Member of Parliament for Dormaa Central of the Bono Region, said the project which was to be developed on a turnkey basis by one of the most experienced contractors in the world, VAMED Engineering GmbH of Austria, was expected to be completed in 30 months.

Addressing a gathering of chiefs and people of Atwima Twedie recently, the minister indicated that the Twedie community hospital would include facilities and services such as outpatient department with the requisite consulting rooms, public health department with a 36-seater capacity waiting room, three ante-natal consulting rooms and a counselling room and two offices for public health officers.

Others facilities will include a theatre consisting of a surgical suite, a minor theatre, a two-bed recovery ward and sterilization unit.

The project also includes the provision of a two-year post notification period of maintenance for medical equipment supply and installation of medical, consumables and operational vehicles.

The minister said “an amount of €71,500,000 from Erste Group Bank AG and Česká Spořitelna a.s. has been secured towards the construction and equipping of the 40-bed hospitals, which will also comprise of 12-units of two-bedroom semi-detached accommodation for hospital workers in various parts of the country.

This is covered by an export credit guarantee of €8,612,931.3 from the EGAP of Czech Republic.

In his view, bringing primary healthcare services to the doorstep of communities and putting up infrastructural projects to improve geographical access to health care to reduce maternal and child health morbidity and mortality remained the agenda of President Akufo-Addo.

Mr Agyeman-Manu urged all partners and stakeholders of the project to work assiduously to ensure timely completion and delivery of the project to augment the government's efforts at ensuring equitable access to health care.

“A healthy people guarantees a wealthy nation and government being mindful of this fact has moved to fulfill to the people its commitment to improve the health status of all residents in the country through improving healthcare infrastructure across the length and breadth of the country,” he stressed.

The minister urged traditional authorities and the district assembly to finalize all documentation on the land acquired for the project to avoid any problems once implementation started, stating that “the policy of the Health Ministry is to provide facilities where communities are willing to provide adequate land for the project and to take care of future expansion.”

He appealed to the people to give President Akufo-Addo and the NPP government four more years to complete the good works they started by voting massively for him during the upcoming presidential and parliamentary elections.