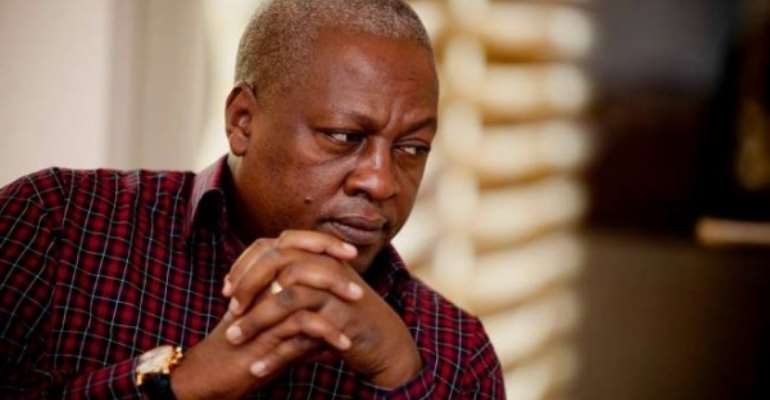 For John Mahama, a person seeking to occupy the number one position of the land, to take the anti-Akyem hate politics to horrendous levels defines the kind of party he belongs and the seeds of intolerance he continues to sow, when only days before he had been admonished by the Otumfuo to think of doing something new in redeeming himself from the 2016 walloping.

President Nana Addo Dankwa Akufo-Addo in July urged communicators of the governing New Patriotic Party (NPP) to focus on selling the achievements of his government, ahead of the December 7 elections, instead of joining others in petty politics based on ethnicity, gender, among others, which have the tendency of dividing the country.

“We need to do a campaign which is not about where you come from – whipping up ethnic sentiments. It has never helped this country and it will not help us. We should be the very people to recognise that this diversity, this Ghanaian tapestry which is full of so many different elements, but comes together in the Ghanaian statement, and we should be stretching that, the Ghana Project, that is what I call it,” the President said when he held a meeting with members of the NPP campaign communications advisory team.

“Whether you are a Muslim or a Christian, it should not be part of our discourse and, clearly, gender should also not be part of our discourse. We are looking at all kinds of records and competences, so it should be possible that the discussion before the Ghanaian people to be discussions about competences, abilities, records, achievement, output…,” he added.

Subsequently, Vice-President Mahamudu Bawumia, speaking at a virtual Government Town Hall Meeting and Results Fair, listed the infrastructural achievements of the governing party. He listed over 18,000 ‘infrastructure for all’ projects spread across all 260 metropolises, municipalities and districts in the country and also emphasised on the value for money ingredient.

For instance, he spoke about how the Akufo-Addo government is constructing four major interchanges at Tema, Pokuase, Tamale and Obetsebi Lamptey Circle at a cost of $289m, as against the John Dramani Mahama administration that built the Kwame Nkrumah interchange alone at a cost of $260m.

Reiterating the call from his boss, the Vice-President also called on the opposition NDC to present its records on infrastructure and come to the table with what they have done.

John Mahama, speaking at a meeting to introduce Prof Naana Opoku-Agyemang to the clergy as his running mate, assured the nation that he would not engage in politics of insults. After alleging that his running mate was being attacked, Mr Mahama claimed that the opposition party does not intend to respond the same way, saying his party would also not engage in name-calling as it campaigns for the enviable first slot in the upcoming elections.

“Our children are listening and copying what we do and it’s important that we continue to serve as good role models to them,” he said.

It appears the former President is reintroducing an NDC old tactics of perpetrating the wrong and quickly running to play victim.

President Mahama, yesterday, took to his Facebook wall to refer to President Nana Akufo-Addo as ‘grandpa’. As if that was not enough, he referred to Akyems as ‘Sakawa Boys’.

Reposting a write-up made by NDC MP for Bolgatanga Central, Isaac Adongo, on the ongoing ‘Agyapa’ discussion, the former President wrote: “An interesting piece from Hon. Isaac Adongo on the Agyapa Deal. Agyapa Royalties fraud is the last straw: The Akyem Sakawa Boys and Grandpas must go.”

That the NDC has an innate hatred for the three Akyem states, particularly the Akyem Abuakwa, is no secret. Adongo himself titled his write-up as ‘Agyapa Royalties deal is a big fraud on Ghana by President Akufo-Addo and his Akyem Mafia.’ On countless occasions, the NDC has taken pride in denigrating the entire Akyemansa (the three Akyem States).

From their national officers, through their regional executives to the party’s communicators, Akyems have always been a punching bag for numerous unprovoked attacks. It does explain why Kwame Azu, an Ashanti Regional Secretary of the NDC, addressing an NDC demonstration in Kumasi, decided to veer from the reason for the demonstration, and descended heavily on Akyems and the Overlord of the Akyem Abuakwa Traditional Area, Okyenhene Osagyefo Amoatia Ofori Panin.

For John Mahama, a person seeking to occupy the number one position of the land, to take the anti-Akyem hate politics to horrendous levels defines the kind of party he belongs and the seeds of intolerance he continues to sow, when only days before he had been admonished by the Otumfuo to think of doing something new in redeeming himself from the 2016 walloping.

Akans, in the history of Ghana, have been the most vilified and attacked groups.

From Professor Kofi Nyidevu Awoonor’s “The Ghanaian Revolution” where he revealed how “Ewes in the Armed Forces achieved the reputation of being notorious coup makers and plotters against successive governments because Ewes see themselves in opposition to all governments in Ghana which inevitably became Akan dominated”, to Professor Atta Mills’ ‘Great Ashanti Project’ where specific Asante businesses were deliberately targeted in an attempt to ‘cut Asantes to size’ to the recent John Mahama’s description of Akyems as ‘Sakawa Boys’, not to talk of his reference to Kyebi, the traditional capital of Akyem Abuakwa, as the headquarters of ‘galamsey’, it does appear that the NDC at every material moment will stop at nothing in attacking the Akan, both physically and verbally.

And the paradox of it is that, in Ghana, when an Akan is attacked, it is normal and considered a joke; when it is the other way round, it is ethnocentric and tribalistic.

Over the weekend, NDC MP for Ningo-Prampram, Sam George, took advantage of the ongoing social media trend of ‘Kumerica’ to denigrate Asantes in the guise of a joke.

President Akufo-Addo comes to mind easily, when the name of the most vilified Ghanaian politician is mentioned. Yet to some people, it is okay, it is normal. Why? Because, he is Akufo-Addo, he is an Akyem and an Akan.

Just last week, former President Mahama was before Otumfuo Osei Tutu II, Overlord of the Asante Kingdom, an Akan king, promising not to resort to insult in this year’s campaign. And this is what he leaves the revered Manhyia palace with – an unprovoked attack on another Akan group.

It is okay if the NDC has no respect for Otumfuo and decides not to take heed to his advice. It is equally okay if the party has no message for the nation, with less than 100 days into this year’s general election. It is okay if the Sammy Gyamfis, the Kwaku Boahens, the Yayra Kokus and the social media boys and girls of the NDC take to social media to insult elders and denigrate other tribes. But the presidential candidate himself too? How and when did the position of a president of Ghana get this low?