Disengage The Ghanaian Soldiers From All Unconventional Tasks Or Lose Respect 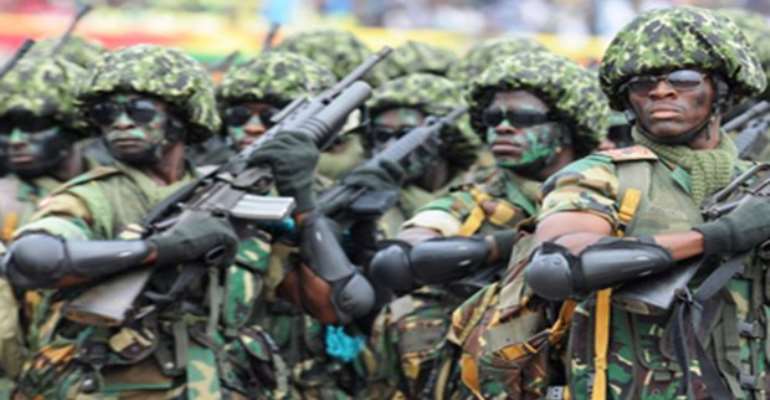 Since the acceptance and practice of an overt democracy in 1992, the Ghana Armed Forces (GAF) have been a very instrumental pillar of support for peace and stability in Ghana. The GAF continues to serve as a monumental watchdog for security, thereby defending her territorial integrity against any external aggression. The military has also been actively engaged in assisting the police to restore law and order and has shown diligence and professionalism in their operations in Ghana and beyond. At the global arena, the GAF is known for its strong commitments towards international peacekeeping in war-torn zones and countries recovering from war devastations, including Liberia, Sierra Leone, Cote D'Ivoire, Rwanda, South Sudan, Lebanon, Cambodia among others. Against this background, the UN Secretary-General for Peace Operations in 2019, praised Ghana for its exemplary contributions to international peacekeeping.

However, in recent times, the GAF seems to be losing respect in the country. This new phenomenon is attributed to the fact that the military engages in assignments that are far from their conventional task. Such unconventional duties of the military include electoral involvement, ‘land guardism’ and so-called celebrity guards. For instance, the military engagement in the just ended voter registration exercise and the youth-military clash over land protection at Domefaase in the Ga South municipality are examples of how the military has been lowered and exposed to likely civilian clashes. The military is the last line of defence; they are called to support territorial border protection and not to compete with the police over assignments meant to be handled by the police.

The sad and worrying aspect is that we have a few months to the election where the military is supposed to be seen as the last instrument for stability and not the opposite. Unfortunately, politicians and traditional elites are behind this development, which could ruin Ghana’s democracy acclamations. As the country prepares towards the 7 December 2020 presidential and parliamentary elections, it is important that a cordial citizen-military relationship exist. There should be a collective commitment and a conscious effort towards disengaging the military from partisan politics and traditional authority’s affairs. Civil society; the media and the National Peace Council have to vehemently speak against political-traditional authority interference and influence in military operations.