What is a Contract? 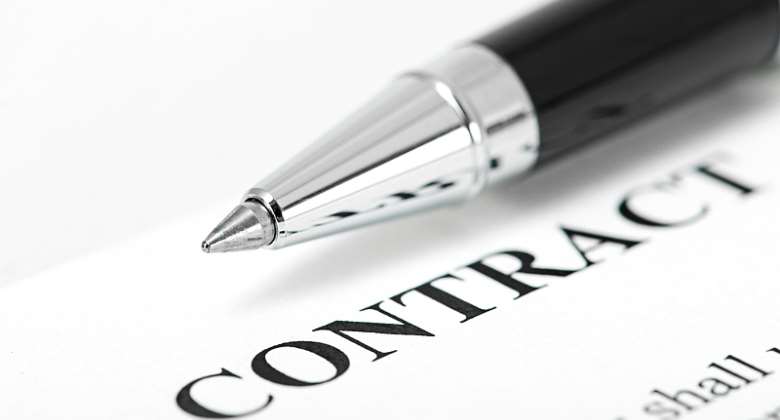 Introduction
There are several disagreements and disputes within the commercial setting over contracts executed by parties. Some of these disputes sometimes escalate and lead to a total breakdown in relationships with some ending up before the law courts, or before statutorily mandated quasi-judicial bodies or arbitration panels.

It is therefore important for contracting parties to know, understand and appreciate what a contract is and what their respective rights and obligations are under a contract.

What is a Contract?
Contracts are entered into everyday by persons for access to amenities and services without even realizing they are contracting, for example buying a newspaper on your way to work, eating at your favorite restaurant, riding in a trotro to work, taking a loan facility or buying a house .

A contract is defined as “an agreement which consists of an exchange of promises ie the parties and which are enforceable under law. “

The obligations and rights under a contract are voluntarily undertaken by the parties themselves and not imposed by law.

The American Restatement (Second) of Contracts (1981) by the American Law Institute defines a contract as:

How does one determine whether an agreement has been reached which can become binding on the parties and therefore enforceable under law.

Essential Components of a Contract
For there to be an agreement, there must be certain essential components, which are:

We will look at these in more detail.

In every agreement there must be an offer and a corresponding acceptance.

Offer is defined as an expression of a willingness to contract on specified terms without further negotiation.

Acceptance of Offer
To every offer there must be a corresponding acceptance of the offer on those specified terms.

An offer must be accepted in order to constitute a contract. The acceptance can be by words, conduct or in writing, it must also be unqualified and final meaning it match the exact terms that was offered. What is called the mirror image rule any variation to the original terms becomes a counter offer which must be renegotiated and accepted by the parties involved.

Scenario 1
Kwame (Offeror) offers to sell a piece of land at Adenta to Kojo (Offeree) at the price of GH¢50,000.00. Kojo indicates his willingness to buy it at GH¢45,000.00 instead, It is important to note that Kojo has not accepted Kwame’s offer to buy the land at GH¢50,000.00 but has rather made a counter-offer to Kwame, which Kwame must either accept or decline. There is therefore no agreement between the two because negotiation is still on-going over the price of the land. Unless the price either offered at GH¢50,000.00 or counter-offered at GH¢45,000.00 is accepted there is no binding agreement.

Except for the post and unilateral contracts, acceptance is deemed to be communicated upon receipt of acceptance by the Offeror.

Postal rule
With a postal or dispatch rule, acceptance is deemed when a letter which is properly addressed is posted, (not when it is received.)

Unilateral Contract
A unilateral contract is one, where one party binds himself to perform a stated promise upon the performance of a stated act by the Offeree but under which the offeree gives no commitment to perform the act , but is left free to choose whether to perform or not.

In a unilateral contract acceptance is deemed when the act is performed, and therefore there is no need to communicate to the Offeror.

Electronic Communication
There is a global move towards digitization such that several transactions are being done through electronic communication. It is therefore important to know when acceptance is deemed to be sent in an electronic form of communication.

Section 18 of the Electronic Transactions Act, 2008 (Act 772) provides as follows

Section 19, which deals with “receipt of electronic record”, states as follows :

Invitation to Treat (Statement of Intention)

In general, advertisements, brochures, price list, displays of goods in shops, tenders, auctions, in these situations the offers are deemed to come from the customers, although tender and auctions have some exceptions which will be discussed at a later date.

2. Intention to create Legal Relations.
A second component of an agreement which would constitute an enforceable contract are that, the parties intend whatever exchanges they are having to be binding on them such that it creates legal relations between the parties .

It this feature distinguishes a commercial agreement from a social/domestic agreement such as between a husband and wife, where in the case of the latter, there is usually no intention by the parties to create legal relations.

3. Capacity to Contract
A third component that constitutes an agreement are the capacity of the contracting parties. That is to say whether they have capacity under law to execute a contract.

Certain categories of persons cannot ordinarily contract under law. Minors that is persons under the age of eighteen years ordinarily cannot execute a contract and when they enter into an agreement they are not bound by them, a minor may however ratify a contract upon attaining the age of majority.

This essentially means contracts executed by minors are not void but voidable.

There are however certain contracts referred to as contracts of necessaries or necessities, such as an employment , apprenticeship, or for instruction which may bind a minor when executed.

Contracts are to be executed by adults of sound mind who understand and appreciate the essence of what they are executing, in this regard persons whose minds are impaired , mentally disordered or intoxicated are voidable.

A contract which is voidable means that it is considered a valid contract until one party elects to reject it for some of the reasons mentioned above and for others such as; mistake, undue influence, misrepresentation or fraud.

A void contract on the other hand is illegal right from the onset because of an express statutory prohibition, or where it its performance will be carried out in an illegal manner, or where its performance will lead to the committing of a crime or civil wrong. Such contracts are unenforceable “ab initio” meaning they are unenforceable right from the beginning...

4. Consideration
Consideration, which is a fourth component, is the basis for which parties may enter into a contract.

Consideration is the mutual exchange of promises. They are promises of value by the parties to each other (not gratuitous). Although consideration need not be adequate it must be sufficient.

Thus in the example given above, the reason why Kojo may have to part with GH¢50,000.00 as consideration to Kwame is the value of the piece of land which is being offered and which will be exchanged for the payment. If Kojo accepts the counter offer price of GH¢45,000.00 it may still be sufficient and good as consideration although may perhaps not necessarily be adequate for the value of the piece of land.

A promise therefore given by a party without consideration is unenforceable in law.

Conclusion
The terms of a contract as earlier mentioned are voluntarily undertaken by the parties, and where it is determined that there is a valid contract in existence, the parties are bound by it and any breach of the terms will result in an award of damages against the defaulting party.