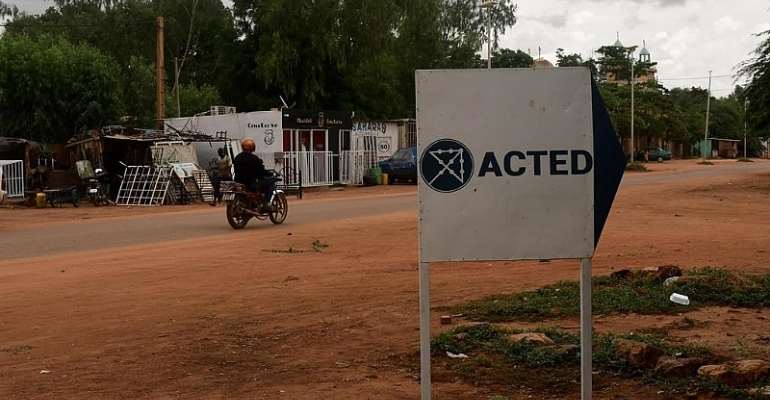 The French organisation representing victims of terrorism says it will file a legal complaint after the publication of photos of the bodies of humanitarian workers killed in Sunday's attack in Niger. It says the images were relayed to France, notably by accounts linked to far right followers and jihadist movements.

The managing director and spokesman of the French terror victims association (AFVT), Guillaume Denoix de Saint Marc, said the pictures came from two sources, probably from within Niger and were then relayed by extremist groups.

"On the one hand, these photos shouldn't be going around, and furthermore, they're being used to incite hatred and that is abhorrent," he told France Info, on the sidelines of a meeting of the victims' families at the French ministry for Foreign Affairs on Tuesday afternoon.

"That is why we are going to file a legal complaint, against those who took the photos and those who republished them."

Shock for families
Seven humanitarian workers from the aid organisation Acted and their guide were killed on Sunday while exploring Kouré, 60 kilometres outside the capital Niamey.

Their vehicle burst into flame after being shot at by men on motorbikes.

The remains of two victims were found burnt. Five others were shot at close range.

According to AFVT, just a few hours after the attack, photos showing the bloodied bodies of the victims could be seen online.

"There were some very shocking photos that were going around on Twitter," the head of the association France Victimes, Jérôme Bertin said.

"Can you imagine the shock for the families who discovered photos of the bodies of their loved ones online, it's unacceptable," he said.

Twitter reportedly removed several accounts which had published the photos.

Following a Defense Council meeting on Tuesday President Emmanuel Macron announced that he would "reinforce the security measures for French nationals based in the region."

France to reinforce security in Niger
Macron said he would "closely study the situation in Niger based on the elements at hand" and assess what needed to be done on a diplomatic and military level in the Sahel region.

France is one of the members of the G5 Sahel group of nations, in charge of monitoring and eradicating terror groups from the Sahel region.

The French national anti-terrorism court has opened an inquiry for "assassination in relation to a terror group" and "links to criminal activity".

A dozen specialized workers from the French internal security body and scientific agencies have already arrived in Niger to carry out a thorough investigation into the attack.

The Nigerien interior minister said the search was ongoing to find those responsible.

Who were the victims?
Among the group of young workers was 30 year old Charline, who had begun her humanitarian mission in Niger with Acted only a week ago.

Nafida, Stella, and Myriam were also killed, along with Antonin and 25 year-old Leo, the youngest of the group, in charge of logistics.

The final two local victims were Boubacar, the driver employed by Acted and father of five children, and Kadri, the group's tour guide, who was also president of Kouré's Giraffe Guides.

Acted, which has suspended its activities temporarily, says it will file a legal request so that the families of the victims will "know exactly what happened," confirmed a lawyer for the NGO.

The Nigerien president Mahamadou Issoufou also said a national state of emergency would be extended and access to the zone around Kouré would be suspended.

The French government is to announce a ceremony and repatriation of the French victims in the coming days.

Some MMDCEs will be approved in December because of controve...
28 minutes ago