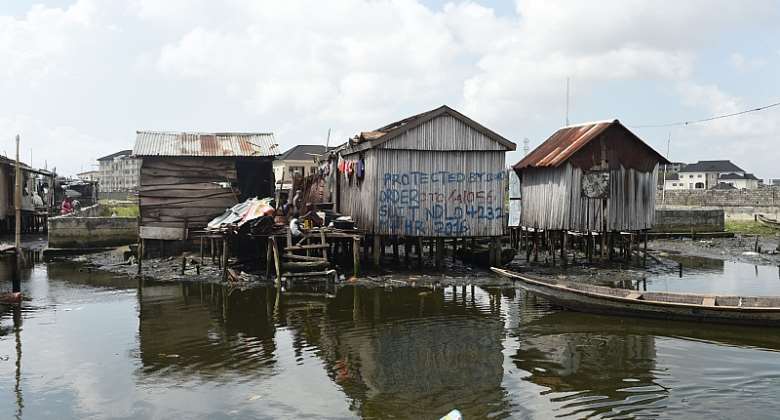 A shack in a waterfront community in Lagos. - Source: GettyImages

Recurrent episodes of marginal communities being evicted from the waterfronts of Lagos have made global media headlines over the last four years. Up until 2016, the city had earned a hard-won status as a model of good urban governance for Africa. Along with better transport systems, waste management and security, the Lagos state government had re-established control over planning and taxation after years of neglect . This led to a more satisfied public as well as higher revenues for the public purse.

But this reputation was replaced as the government seemingly began to prioritise its real estate frontiers over the lives of tens of thousands of vulnerable people. Violent waterfront land grabs and demolitions followed. These have been carried out by a mix of state authorities and central government agents, who have used tactics of both force and law.

The devastation of these communities, while particularly shocking, is part of a much wider phenomenon of insecure property rights which affects many, if not most Lagosians, from the poorest to the middle classes and wealthy elites.

In our new paper , we explore ideas and practices relating to urban land rights in Lagos: a city where land tenure is increasingly characterised by 'radical insecurity' – a permanent sense of uncertainty and unpredictability.

Land and property rights have a complex history in Lagos. As a precolonial port city, land was allocated by powerful families but owned communally . This was followed by nearly a century of British rule, which introduced private property rights and deeds . After independence, government introduced the Land Use Act, which transferred ultimate land rights to the state .

The city now has to deal with the hybrid inheritance of these different approaches.

Lagos' accelerated growth since 1960 has intensified its land struggles. This has seen both huge state-planned development and growth in marginal communities, which sometimes even create their own land from rubbish packed under sand. This insecurity has been heightened by economic crises and the broader scramble to control natural resources. In the words of one of our research participants,

land is the crude oil of Lagos.

The fundamental question of who has the right to occupy and use a piece of the city's lucrative land reveals layers of complexity, fragile negotiated arrangements, formal and informal payments, historical assertions and moral appeals as well as pervasive violence.

In this context, standard distinctions between a property right (with its corresponding, legally enforceable duty of others not to interfere) and a mere claim to a piece of property become very slippery. In fact, when examined closely, the distinction seems virtually to disappear.

This is important for policymakers because it casts further doubt on perennially popular ideas – most strongly associated with the Peruvian economist Hernando de Soto – that giving the poor secure legal property rights is the best way to create transformational wealth.

Our paper is based primarily on fieldwork in Lagos in late 2016 and February 2017. It consisted of interviews with a wide range of stakeholders. They included tax and land officials, property owners and developers, waterfront communities, individuals and groups associated with 'traditional' land claims, lawyers and NGO representatives.

We moved repeatedly between three worlds: middle-class Lagosians fighting rival claimants to their land while instigating their own claims on others; waterfront communities struggling to defend their auto-constructed property claims; and the bureaucratic spaces of land and tax officials.

One of the things we found was that paying property taxes plays a significant role in Lagosians' efforts to acquire tenure security. Usually, taxation is thought of as a result of already having an established property right: you own something, so you pay tax on it. We found something rather different in Lagos.

The city has been lauded in recent years for its success in raising tax revenue, including property taxes. But part of the reason for this is a negative one. People aren't paying because they receive public services. They do so because they feel insecure.

We found that enthusiastic payers of Lagos' Land Use Charge (its centralised property tax) include people in waterfront communities under threat of eviction. They pay because establishing a paper trail as good taxpayers marks them as good citizens, and creates a record of their presence. Although they have no formal documentation of ownership, they feel that tax receipts provide some additional armour against dispossession.

Taxes are just one of the many forms of payment that people make to try to secure their land. They also make multiple payments to fend off other people who are trying to claim rights to their plot.

In Lagos, as in many cities of South-West Nigeria, having to pay levies to groups claiming longstanding ancestral links and traditional authority over the land is very common. Although termed 'omo onile' , which translates to 'children of the land', these groups have become synonymous with land-grabbing thugs whose historical claims vary from well-established to tenuous.

This means that people don't only have to worry about state eviction in their pursuit of tenure security. They also have to watch out for a range of additional actors with claims to land, which the state periodically denies or validates.

Nor is it just the poor who have to fend off omo onile claims. Even wealthy people who sometimes possess a Certificate of Occupancy – the supposed 'gold standard' of property rights – need to back it with strong narratives of legitimacy, sophisticated strategising, and sometimes the willingness to show force in the street.

Formal property rights in Lagos are therefore often comparatively 'thin', even when they are legally solid. But claims to property can be very 'thick' as individuals deploy a range of tactics to reduce insecurity. These are often embodied in documents – sometimes even colonial ones, which 'traditional' leaders use to claim the recognition of their rights as long ago as 1860.

But, as documents are never enough, attempts are made to solidify these claims through knowledge of legal processes and loopholes, sophistication in weaving historical narratives, performances of civic virtue and social relations built up with specialists in violence.

The more you can build up your armoury of claims, the closer you might get to something that feels like a private property right. But whether that will ever be secure remains questionable when the foundations of property are so contested.

Our research shows that property rights aren't something 'digital' in Lagos – something you either have or don't. Property rights have an analogue character, existing by degree, and attempting to realise them requires continuous labour on a range of fronts.

To pretend otherwise obscures the real challenges that city-dwellers face. Our research also underscores the fact that there is little benefit in creating systems of formal private property that lack social legitimacy.

While Lagos may be an extreme case, these dynamics whereby people have to continually build their property claims are echoed around the world.

Scholars increasingly highlight the need for greater creativity in thinking about forms of non-privatised land tenure to deal with the pressures of urbanisation. In this context, the world has much to learn from Lagos about why private property rights are rarely sophisticated enough to reflect contemporary urban realities .

Tom Goodfellow and Olly Owen received funding from the International Centre for Tax and Development for this research.

Olly Owen receives funding from the International Centre for Tax and Development which supported this research while the UK's Economic and Social Research Council (ESRC) supported his wider work on taxation in Nigeria. Olly Owen is a Research Associate at Oxford University's African Studies Centre and the Institute for Social and Cultural Anthropology, and a Principal at The Policy Practice consultancy. He is also currently serving as Research Director of the Nigeria Tax Research Network (NTRN).

By Tom Goodfellow, Lecturer in Urban Studies and Planning, University of Sheffield And

Hottest Photo Reports
Catch up with all the political quotes from our politicians.
Advertise here
More from Article
ModernGhana Links
Would Kenyan women's rights be safe under William Ruto? Why they might not be
Mosquito species from Asia poses growing risk to Africa's anti-malaria efforts
Mosquitoes: there's malaria, plus 5 other diseases they pass on to humans
TOP STORIES

Take bold decisions to turn things around, not just talks – ...
4 minutes ago

'You do nothing while Ofori-Atta makes a fortune of our loan...
49 minutes ago