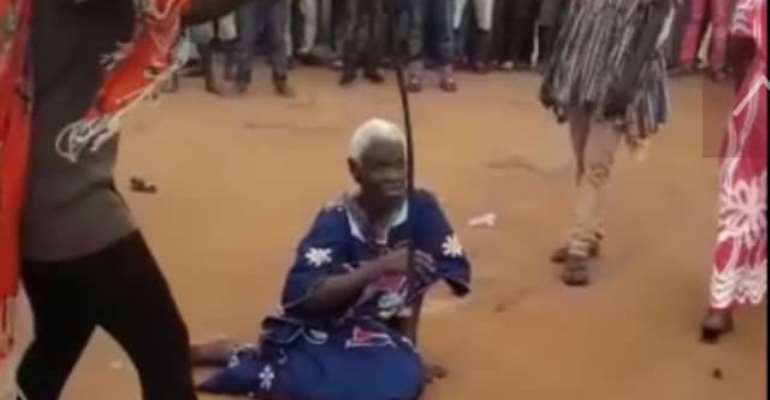 Hajia Zuwera Ibrahimah, the NDC Parliamentary Candidate for Salaga South Constituency, has condemned the lynching to death of a 90-year-old woman architected by a chief priest and a mob which occurred in the East Gonja Municipality.

What was very disturbing was that the beating and lynching were captured on camera which was later circulated on social media.

According to Hajia Zuwerah, these barbaric acts should never be supported by any society or groups of people and should rather be condemned in the strongest terms by all well-meaning Ghanaians.

The NDC Parliamentary Candidate for Salaga South Constituency made these reactions in a press statement.

Here is the Full Statement

The Abuse Must Stop; Stop Labeling Women As Witches

The sad developments of Thursday night, where a group of people in Kafaba lynched a 90-year-old woman to death and which unfortunate incident was reported on TV3 news is both sad and regrettable and I wish to join the people of East Gonja Municipality and the entire country in condemning this barbaric act.

It is unfortunate that some individuals in Kafaba will perpetrate such an act based on accusations of witchcraft. How do you accuse a vulnerable 90-year-old woman of witchcraft and defenseless as she is, you proceed to lynch her to death.

This is a crime of the highest order and I expect the Ghana police to track down the perpetrators of this barbaric and criminal act, and bring them to justice. The law must work immediately to bring some relief to the affected family and to instill a sense of security in the people of Kafaba.

As a society, we have a duty to protect the vulnerable and less privileged as custom has taught us in our communal living. Any deviation from this time tested culture and tradition will spell doom for our societies and especially to target WOMEN in these barbaric acts is most unfortunate and must be condemned by all.

Women at all levels, shape societies and so the stereotyping of women as "witches" must stop. It is doubly sad when other women lead these actions against their fellow women. This unfortunate incident in Kafaba this week must be a wake-up call to all women to stand by one another and should never allow themselves to be used for such criminal acts. It's sad that another woman proclaimed the 90-year-old as a witch and which led to her being lynched to death. The discrimination against women must end and women must lead the effort.

I expect the police to act immediately in investigating this crime in order for peace and tranquility to be restored in Kafaba.

Lawlessness such as exhibited by some individuals and groups in Kafaba should not be tolerated and everything must be done within the law to stop such acts in the future. Mob violence is an attack on the Fundamental Human Rights of the individual including the right to security and the right to life.

At no time, therefore must any person or group of people abuse the rights of any other to the extent of violently taking their lives. It is a sad and difficult time for the family of the late Madam Akua and I wish to extend my heartfelt condolences to them. My thoughts are with them.

I wish to reiterate that we are looking up to Ghana Police Service to treat the matter with urgency and bring the perpetrators to book.

May the soul of our dear mother rest in peace and may Allah grant her Jinatu Firdaus.