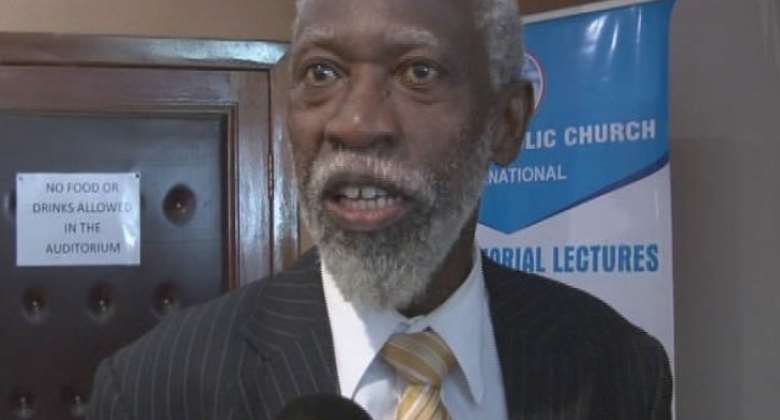 Prof. Adei my once cherished scholar, I have stopped listening to you for some time now because of the vituperations and the stir of unprovoked controversies that have come to characterize your speeches in the media space as part of national discourse in recent times. I should think with some significant level of certainty that most people in Ghana who used to listen to you admiringly and revered you as a neutral and a nationalistic leadership expert have also stopped listening to you.

And you know why? You no longer make genuine, neutral, nationalistic and cohesive speeches necessary for nation building. Unfortunately, you only make noise in the media space controversially with some level of academic pomposity that does not qualify for addressing even the developmental needs of your village, Hwiremuasi in Adansi, Ashanti Region, let alone Ghana.

Prof. Adei, I bring you greetings from my harmless Hakuna Matata Hamlet where no treacherous and murderous Macbeth lives to harm King Duncan and Banquo even to the point of mortality. You might have read the Shakespearean Macbeth before so you can relate with my theatrical twist.

As such, I only seek per this piece, to disagree with your views expressed on the vice presidential candidature of a female academician and a politician, one of the outstanding women in Ghana, Prof. Naana Jane Opoku Agyemang. As for me, I do not belong to the NDC or the NPP so I will speak my neutral mind. You are an intellectual so we can debate the matter further.

You are more expected to cherish and value capabilities of females

As an Akan from Hwiremuasi (in Ashanti), which is a matrilineal society, it behooves you to cherish the capabilities of womanhood more than others. If for nothing at all, the bravery of Yaa Asantewa should motivate you to do so. But alas!!!, you have chosen the reverse.

Prof, in your bid to criticize others, you sometimes play to the public gallery with a certain derisive laughter as though you are the most intelligent personality in Ghana. It should not be lost on you that the credibility of your professorial status had come under meticulous interrogation for months in Ghana in 2007 thereabouts. In case you are no longer compos mentis on such a monumental doubtful cloud over the genuity of your professorial status once upon a time, then be reminded once again. Egbert Faibille Jr, the Editor-in –Chief of The Ghanaian Observer Newspaper (as he then was), started it all. It was later reported that the matter went to court and you won the defamation case against him. It is interesting to note that you currently work with him in the Akuffo Addo Administration, even though in different capacities and sectors. How market, Prof? What is your current relationship with Egbert? Please take note that I was on your side in spirit in that defamation case.

In assessing Prof. Jane Naana Opoku Agyemang's nomination as the running mate for John Mahama in the upcoming December 2020 general elections, you virtually attacked both the female gender and the relevance of the position of a Vice Chancellor in our public universities. You said, Naana Opoku Agyemang’s position as the erstwhile Vice Chancellor of Cape Coast University is not a sufficient criterion to guarantee her success in office as the Vice President of Ghana. You further added that the office of the Vice President “is a total national development management job.” If being a former Vice Chancellor is not a sufficient managerial experience and a national development job, then what else can it be? Does national development occur only from central government level? If John Mahama had selected as his running mate, Madam Georgina Adei (your wife) or Madam Abena Pomaa (Bedito, your mother), would your assessment of her candidature be same?

As such, the choice of presidential and vice presidential candidates under the 1992 Constitution has been conventionally left as a matter for political parties to deal with. They fix filing fees that eliminate the poor and favour wealthy elites.

A famous leadership Professor of your status may rather want a review of articles 62 and 60 (2) of the Constitution and perhaps the relevant parts of article 94 cited above to include any such qualifications or eligibility criteria you deem fit.

Prof. Adei, have you read the Fiadjoe Constitutional Review Commission (CRC) Report? It recommends at its page 90 (items 40 and 41 specifically) that the provisions of articles 62 and 60 (2) of the Constitution should be maintained. As it stands therefore, Prof. Naana Jane Opoku Agyemang qualifies constitutionally to occupy the high office of Vice President or even President in the temporary or permanent absence of the President as the Constitution overtly provides in article 60 (6), 60(7) and 60 (8).

Prof. Adei, when you assessed Naana on the Joy FM Super Morning Show, you initially went pompous again that you ever worked in the UN system so you had been taught to be circumspect when commenting on women. Contrary to this claim, which I do not doubt, you ran this woman down on live radio. If someone like you Stephen Adei from a matrilineal societal background does not value and recognize the capabilities of a woman and an astute one like Naana Opoku Agyemang, then who else should be a valid point of emulation in these matters?

You may want to be informed that even in a male dominated society like ancient Egypt, women became Pharaohs. You can refer to Egyptological literature and read about the female Pharaohs such as Sobekneferu, Meneith, Hatsheput, Nefertiti, Arsinoe II, Khentkawes I and Cleopatra VII. Let us be proud of our own too irrespective of our partisan political interests.

Prof. Adei, stay put for my Second Epistle to you.