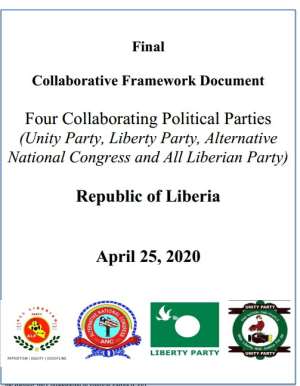 Doing Business with Former President Ellen Johnson Sirleaf undermines the Integrity of the Collaborating Political Parties (CPP) and Questions their Overall Agenda- eight (8) Reasons why the CPP must quickly shift gear ahead of 2023 general and Presidential elections.

It is time now that Liberians try to break away from this bad culture of idolizing past presidents when their tenure in service has expired, especially when this is done most times with gross disregards for their levels of performance, commitment and dedication when they served and governed the country. Immediately a Leader leaves office, most times, they transformed into overnight patriots and begin to parade as the all-knowing of the day. Then we ask; why didnt you use your expertise and skills to develop the country and end bad governance when you had all the times and opportunities to serve the country as its president? Fanatics of Mrs. Sirleaf need to ask her this question as well because this is exactly the same trend of attributes she has taken since her departure from office. The heaping of praises on her by some members within the CPP is enough to give her the courage to discuss good governance and quality leadership even though when she had 12years as President at which time she failed miserably and unthinkingly. As we soar to rebuild our country after 14 years of child-soldiered and drug-fuelled civil unrest couple with another 12 years of misrule, bad governance and massive corruption under the Mrs. Sirleafs hegemony, it is time now we open another page for national devotees and genuine patriots and break away from this ugly culture of unnecessarily heaping praises on past leaders.

Madam Sirleaf served Liberia for 12 years as the highest official of Government. In this time, there were massive inflow of international aid, great debt waiver and UNMIL provided both unhindered security and great economy potential as there were monthly injection of foreign currency in to the economy which came in as arrears and benefits for the UN mission in the country. Despite these incentives, her rule was mired with massive corruption, bad governance and untold hardship. Nepotism, kleptocracy and despotism were her styles of governance.

After 12 years of service what is Mrs. Serleaf’s legacy?

Many Liberians remain predominately poor. About 88 percent of the population still lacks access to electricity and Monrovia is still dark, child mortality is still high, and millions more are unemployed. Also, women in the country still lack opportunity to contribute to the economy. What did she miss out yesterday that she has come to implement today? Liberians cannot afford the recycling of thieves and pseudo-patriots, it is either the CCP shift gear or risk losing the trust and confidence of the Liberian people.

The continuous affiliations of former President Sirleaf with the CCP might not alter well for them and their political agenda and also raises great suspicion over their so-called demand for change and good governance. Madam Sirleaf represents a big portion of the rotten layer of 12years of misrule and bad governance. Below are eight reasons why the CPP must immediately shift gear away from doing business with Madam Sirleaf or risk losing the trust and confidence of the people.

During her 12 years of misrule, Liberia was heavily engulfed into governance WAHALA and leadership deficit. From nepotism, segregation and other forms leadership maleficence Madam Sirleaf led the country with disregard for the rule of law and initiated many constitutional violations. She has no good advice to offer the leaders of the CPP least to say she has a legacy that points to good governance and patriotism.

As president, she ran Liberia like a family paradise. Her sons and proximal family members were appointed to strategic positions of interest. Robert Sirleaf who later bankrupted the National Oil Company of Liberia (NOCAL) served as Strategic Advisor to her and also Notional Board Chair for NOCAL, Fumba Sirleaf was appointed as Head of the National Security Agency (NSA), while Charles Sirleaf was promoted as Deputy Bank Governor at the Central Bank (CBL) of Liberia upon her second election victory. Also, in 2014, Madam Sirleaf brought her 17 years old grandnephew from the US to make presentation to the House of Legislature on how to manage the profits of oil. Can you imagine that? Madam Sirleaf lacks the moral standing to advice anyone about good governance especially now that the country is desperately looking for a competent, loyal, patriotic and reliable alternative to president WEAH come 2023 general and Presidential Elections.

Though she did not publicly admit of not supporting Vice President Boakai during the 2017 elections but from all indications, it was clear that she and Vice President Boakai broke ties due to his alleged denial to compromise on policy issues relating to prosecuting officials of her corrupt administration, and also the establishment of war crimes and economic courts to pursue perpetrators of the 14 years of civil unrest. It has always been about her personal interest. Vice President Boakai was a long term ally to Madam Serleaf who got snubbed because he refused to adopt her devilish plans and desires. Why should the CPP be behind Madam Sirleaf at this crucial time when the failures of WEAH is getting clear by the day? They need to quickly rethink ahead of the elections year.

She has always been a divisive person who keeps malice for people when they disagreed with her and her evil deeds. That was seen clearly between she and Senator Varney Sherman, former Unity Party chairman Wilmot Paye and a host of individuals. The CPP should stop any attempt to sow a seed of discord and disunity that would crumble their collaborations and inflame its break down. Madam Sirleaf does not mean well for them and the collaboration. She is on a reparation mission against her proclaimed political foe.

Liberians endured a lot of repression and Human Rights violations under Madam Serlaefs 12years of misrule. Her regime unjustifiably imprisoned many students Leaders, Civil and Political Rights Activists including the shutting down of Radio Stations as well as incarcerating critical journalists and media persona. She muzzled the media and forcibly chased critical voices out of the motherland. Rodney Sieh, Henry Costa, Vandalak Patircks and a host of many activists in Liberia were jailed or forced into exile.

As though her 12years of misrule and bad governance is not enough, she played a significant role in getting WEAH where he is today. She covertly supported him. Because of this, most young people look at her to be the midwife for the current crisis in the homeland. Former President Sirleaf has become hugely unpopular amongst young people in Liberia. Anybody or political institution that associates with her risk carrying the same stigma she has. The CPP must be clear about trusting the Liberian people or choosing to continuous business with the Harvard-trained economist and Nobel Laureate.

As the first democratically elected female president in Africa Madam Sirleaf did little to alleviate women from their pre-war status. Under her regime, rape was normalized and thousands of girls were abused in limelight. Sexual and Gender Base Violence SGBV surge unprecedentedly and even became a new normal. Most women are disappointed about this disparaging legacy of their counterpart. In fact, she ruined the chances given to women and betrayed the trust of the women who were very pivotal in ending the Civil crisis in Liberia. At one time, she denounced feminism as extremism and refuse to address issues affecting young girls and women in the country. How can such an individual become a political patriot overnight? The CPP must stop this gimmick or risk their chances at the ballot in 2023 elections.

Her motive during the 2017 elections was to find a successor who will protect and guarantee her interest. Madam Sirleaf has never gotten tired stealing from the country. She still has an unnoticed relationship to states coffers and she is willing to do everything to protect these dubious deals. The CPP claims of being anti-corruption is whimsical when it has already started to see Former President Sirleaf as a moral cornerstone. She must never be tolerated amongst the ranks of people who claimed to be serious about fighting corruption and bring lasting change to the country.

As I attempt to end, let me say, Liberia is fast failing under the watchful eye of an ignorant ex-soccer star who lacks the moral ingredients, intellectual prowess and leadership attributes to lead the country. Those aspiring to replace this nightmare must take clue and be serious about their claims of good governance and statehood. Liberians cannot continue to reshuffle thieves and looters. The CCP has frowned on WEAHS corruption and bad governance yet it is accommodating one of the most corrupt leaders to ever serve the country. This is paradoxical and heavyweight hypocrisy which is intolerable. Ahead of 2023, Liberians are in need of genuine change and not to recycle Mrs. Sirleaf and her boys. If the CCP does not have the courage to break away from Former President Serleafs ugly past of bad governance, corruption, nepotism and despotism, then the Liberian people have a moral duty to reconsider their trust and confidence in that collaboration. It is no more about lesser and bigger evil; it is either youre on the side of the people or youre with the class enemies. Madam Sirleaf has no interest in the perennial struggles of the Liberian people except her regular political game; to protect herself, her family and her team of micro-crooks and embezzlers. It is either the CPP choose the side of the people and gain their trust and confidence or choose Madam Sirleaf and risk losing the support of the true electorates. Whatever way, we can assure them that the masses will make their own history comes 2023.

“Lets look beyond the horizon and bring afresh new solution.

Lawrence S. Tuah is a Student of the State-run University of Liberia. He is a member of the campus based Vanguard Student Unification Party SUP.

I'm grateful to be named by Forbes as African of the Year — ...
15 minutes ago

Covid-19: We oppose singling out African countries for trave...
15 minutes ago