Beyond Tokenism: Accelerating Rights Of Women And Girls In A Post-COVID Era 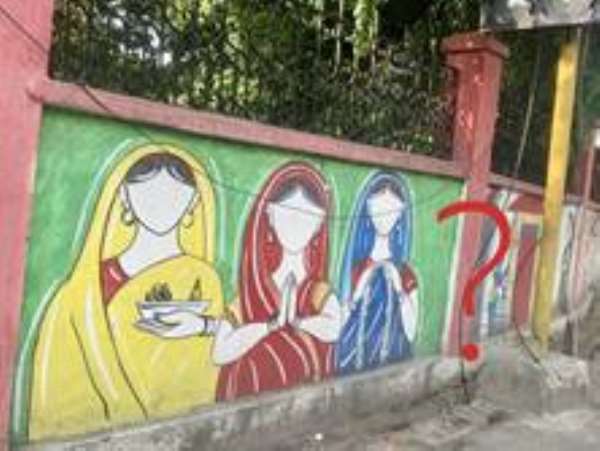 I am tempted to share this very recent photograph of a newly done up mural in a very prominent area of my city barely a stone-throw distance from the state parliament. It is a clear depiction of what our patriarchal society wants its women to be-meek submissive, docile, their colourless faces devoid of any hope or desires. I fervently hope that it is not the sign of times to come.

This year's World Population Day theme of safeguarding the health and rights of women and girls is bang on spot, more so in the context of the current COVID-19 pandemic.

The recently held 2nd session of 10th Asia Pacific Conference on Reproductive and Sexual Health and Rights (#APCRSHR10 Virtual) on "Accelerating Rights and Choices for all in a Post-COVID Asia-Pacific", saw several gender equality and women rights' activists draw attention to the ills plaguing women and girls, especially those living in the Asia Pacific region.

Dr Gita Sen, a scholar of international repute and Distinguished Professor at Public Health Foundation of India (PHFI), rues that the pandemic has further heightened the risks of disturbing practices prevalent in Asia Pacific countries (including India) that harm women and girls and undermine their equality - as shown by The State of the World Population Report 2020 by UNFPA.

"The existing inequalities have only exacerbated during the current pandemic. We also saw emergence of another parallel pandemic of violence against women and girls—those who were locked up with their abusers in their homes during lockdown. We have seen too little active leadership to remove stigma and to deal with the backlash against gender equality and sadly some leaders have gone in the opposite direction and we really need to tackle this", she says.

India has a long way to go to achieve the three zeroes (that were set in motion by UNFPA) by 2030: zero unmet need for contraception; zero preventable maternal deaths; and zero gender-based violence and harmful practices. The UNFPA report points out that India's maternal mortality ratio (deaths per 100,000 live births) was still high at 145 and modern method contraceptive prevalence rate in women aged 15-49 years, was a mere 38%.

The report also corroborates that the majority of Indian women still lack the power to take decisions regarding their sexual and reproductive health and to negotiate and choose if they are willing to get pregnant or wish to give birth to a baby. A strong preference for a son by families is still prevalent, abetted by the country's overwhelming patriarchal society.

In one of her articles, Dr Kalpana Apte, Director General, Family Planning Association of India (FPA India), said that sexual health is largely neglected and reproductive health is not a priority in policy discourse in India. Citing a recent report by FPA India, she shared some very disturbing data: 50% of maternal deaths among girls aged 15-19 years occur due to unsafe abortion practices; 26.8% women aged 20-24 years were married before age 18 years; more than 50% of children between the ages of 5-12 years have been sexually abused and more than half of the cases of sexual abuse and rape go unreported; 34% of adolescent married girls admitted to being physically, emotionally, or sexually assaulted.

The situation in many other countries seems no better. Abortion is still illegal in Philippines and advocates of sexual and reproductive health and rights (SRHR) are called witches, said Dr Junice Melgar, Director of Likhaan Center for Women's Health and a champion of SRHR and family planning in the Philippines.

"(Filipino) women have endured severe hardships to get sexual and reproductive health services during COVID-19 lockdown. They have had to walk 2-3 km (due to absence of transport) to reach the clinic and then wait for hours in queues (due to social distancing) to get injectables and implants, which they could not get from neighbourhood drugstores. Pregnant women faced bigger challenges, with smaller birthing centres closed and the bigger hospitals refusing to admit them due to fear of COVID," she says.

Also for women experiencing partner violence, there were no shelters available, and no transport vehicle to take them to the safety of family or friends. Women were left with no choice but stay with the abusers until the COVID-19 storm passed.

Catherine Harry, who runs a popular video blog 'A Dose of Cath' that challenges the gender taboos still prevalent in her native Cambodia, makes a strong case for providing young people education on sexual and reproductive health.

Catharine shared that, "When I was young, I received very little sex education from school. It was something that teachers assumed we would naturally know, (which is far from true) and parents thought it was something that we should not know. Because of this, many young people turn to pornography to get information on sex education. Not only does pornography not provide any accurate depiction of what sex is, but it also perpetuates very harmful stereotypes. Pornography also rarely shows how to protect yourself from STIs and unwanted pregnancy."

Then again, COVID-19 has shown us the importance of internet for providing online information and education to those confined to their homes under lockdown conditions. Onsite classrooms have turned to online classrooms. But women and girls and those from underprivileged communities are at a disadvantage in accessing this online information. Catharine calls this internet inequality: "When people do not have access to the internet, they lose access to a vast vault of information, and most of those people tend to be women. If a household has only one phone that can access the internet, that phone tends to go to a male in the family".

Unless women have easy access to correct information and are aware of their rights, they will not be able to make what we call 'informed choices'. So it is important to make the internet more accessible for everyone (in terms of its cost and coverage) and encourage more women to participate in technology, which is still a male-dominated field, feels Catharine.

It is high time we stopped treating women as a commodity, or as a burden or at the best as an ornamental piece. She deserves to be respected and treated as a human being, no less.